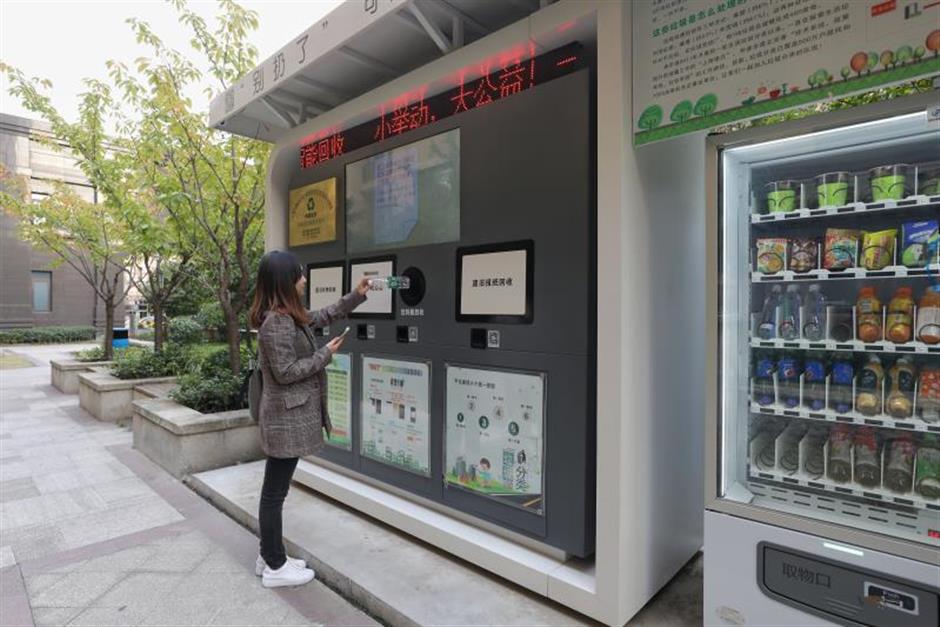 A resident in Jing’an District uses a smart bin. The machine also rewards correct disposal of trash with bonus points that can be redeemed for items like soap, milk and soybean sauce.

Shanghai is stepping up efforts to deal with the problem of garbage.

According to a recently released draft regulation, household garbage sorting would be made mandatory citywide by 2020, and individuals who mix their waste will be fined up to 200 yuan (US$29).

Shanghai has moved quickly in this direction, launching a number of awareness campaign, mostly targeting its young residents.

Among them is the publication of a book series — the first of its kind — that highlights the importance of garbage sorting to local school students.

The books are available in three versions, catering for preschoolers, primary and middle school students. Graphics and illustrations are used to make sense of complex regulations.

Schools are also using mobile games and rap songs to popularize the importance of garbage sorting. The use of these innovative elements will likely make garbage sorting a fun activity and, therefore, an easily understandable process.

However, books and school education are far from enough in knocking some environmental sense into students. Garbage sorting requires more hands-on practices.

More importantly, it should percolate down to families, with parents leading by example. Bins with separate chambers for wet and dry waste at home could be a good start.

But in many neighborhoods in Shanghai, proper garbage disposal infrastructure is not yet in place.

Mine is one of them. There is one big garbage bin for each building in my neighborhood. Residents habitually carry bags of trash downstairs to be tossed into the bins. Seldom do they expect a change to this daily routine.

Every morning, sanitation workers come to collect all the garbage, salvaging recyclable items like plastic bottles and cardboard boxes from the rest of the pile.

I learned from a neighbor that 10 years ago garbage sorting measures were temporarily implemented. Back then, every residential building had two bins, meant for recyclable and non-recyclable items. But no one was quite sure what trash should go into which bin. And no one was there to offer instructions. Before long, people just threw garbage into whichever bin was less full. The scheme fizzled out.

The neighbor agreed that classifying household trash contributes to environmental protection, but remained skeptical how to kick-start this practice in our neighborhood.

I guess getting people to form a new habit is never easy. Resistance can be expected. But I also believe with the help of technology and some incentives, things could be a lot more different.

According to Shanghai Morning Post, a smart “talking” bin in Gumei No.4 Village in Minhang District has been the talk of the town recently. The bin can detect people in front, acquires the number of their residential buildings, and instructs on how to handle their garbage. Voice recognition enables commands to be given and accepted in both Mandarin and local Shanghai dialect.

The machine also rewards correct disposal of trash with bonus points that can be redeemed for items like soap, milk and soybean sauce.

This smart bin incentivizes garbage sorting, effectively reducing the burden on volunteers and community workers who have to be on site to ensure compliance.

But technology is no panacea. Perseverance and educative persuasion from community workers are still indispensable.

In this regard, the neighborhood committee in Shanghang New Village in Changning District has set a good example.

In their office, there is a hefty “ledger” plastered with receipts volunteers tear off from take-out meal boxes that are thrown into the wrong bins. For months, volunteers and community workers had to go door-to-door according to addresses on the receipts to persuade and guide residents to sort their waste.

Their patience and perseverance paid off. As reported by Jiefang Daily on December 7, many residents now obey the garbage sorting rules, and it has been months since the last receipt was pasted on the “ledger.”

Many say it is an uphill battle to cut back on household waste.

But I believe with policy support, technology and a bit of doggedness in community work, we stand a good chance of winning this war against trash.