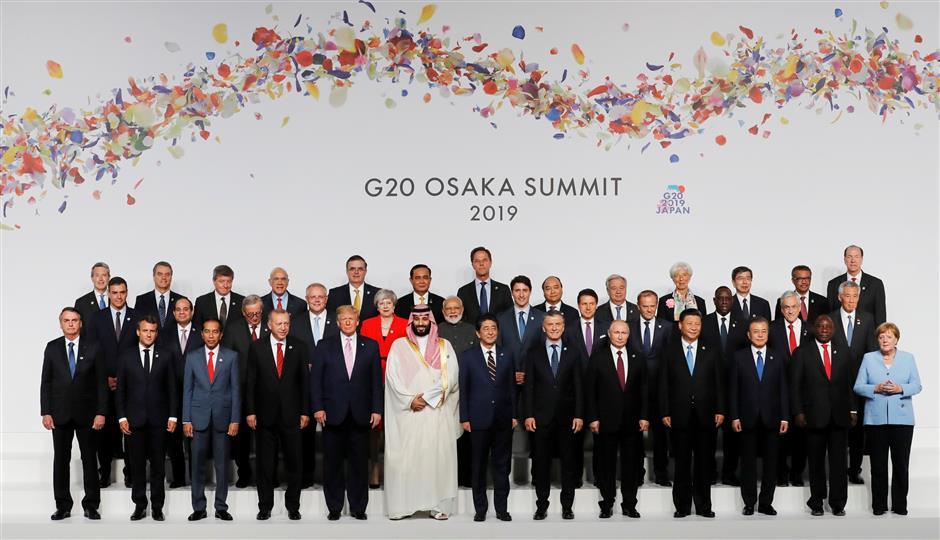 Leaders of the Group of 20 (G20) economies on Saturday concluded their two-day summit in Japanese city of Osaka, following intense discussions to seek common ground on pressing global issues.

G20 leaders issued a declaration at the conclusion of the summit and pledged actions to address economic downside risks and promote free trade.

Throughout its G20 presidency, Japan has been keen to put the world's 20 major economies on the same page over pressing global issues, in particular free trade and multilateral system.

Japanese Prime Minister Shinzo Abe urged fellow leaders to send a "strong message for the maintenance and strengthening of free, fair and non-discriminatory trade," saying that Japan will continue to promote the improvement of multilateral trading system and consensus on economic cooperation.

His call was echoed by many G20 members, including the world's second largest economy China, which renewed its commitment to upholding the multilateral trading system and pledged to further open up its market, expand imports and advance trade talks.

According to the leaders' declaration, the G20 economies will "strive to realize free, fair, non-discriminatory, transparent, predictable and stable trade and investment environment, and to keep our markets open."

At a time when the global economy is facing downside risks, it is crucial that G20 members reaffirmed their commitment to free trade, analysts said.

Denisse V. Rudich, director of the G20 Research Group London, saw the support for WTO reform and promoting free trade as the most important outcomes of the summit.

The commitment pointed to "how they (G20 members) can scale back protectionism and continue to promote trade liberalization, which is incredibly important," she told Xinhua on Saturday.

According to Joseph Matthews, senior professor at BELTEI International University Phnom Penh, the right direction for G20 is to "discuss on equal-footing the issue of trade tariffs and create fair trade and equal opportunity global environment" where countries have access to the global market "without being discriminated."

In a major development, China and the United States on Saturday agreed to restart economic and trade consultations on the basis of equality and mutual respect; they also agreed that the U.S. side will not add new tariffs on Chinese exports, and the two countries' economic and trade negotiating teams will discuss specific issues.

"It's one of the 'value-added' benefits of these kinds of forums. They provide an opportunity for the leaders to get together to discuss and overcome negotiation problems," he told Xinhua.

The world's major economies are not without differences, especially on issues such as trade and climate change, raising concerns about a possible weakening role of multilateral forums such as the G20. At Osaka summit, many leaders and other stakeholders were determined to uphold the multilateral approach in tackling global challenges.

"Multilateralism is in the Europe's DNA. By being united and working together, we make ourselves individually and collectively stronger," said Juncker in a message to the summit.

China, France and the United Nations on Saturday held a trilateral meeting on climate change, one of the key topics on this year's G20 summit, and agreed that all countries should uphold multilateralism, fulfill the Paris Agreement commitments, and help push for fruitful results of the 2019 Climate Action Summit and the 25th session of the Conference of the Parties (COP25) to the UN Framework Convention on Climate Change (UNFCCC).

"Multilateralism is the best way of dealing with most of the global problems ... because on many issues, you need a lot of countries to be involved, especially on climate change," said Luckhurst.

Multilateral approach works better because it gives some of the smaller countries and developing countries more opportunities to be heard and have more influence, he said.

Upholding multilateralism is the right direction for G20, said Lee Sang-man, professor at the Institute for Far Eastern Studies of Kyungnam University, adding that the China-proposed Belt and Road Initiative is a way to strengthen cross-border communication and consultation, so as to achieve common development and shared benefits.

"The international community should go towards multilateralism that advocates cooperation, instead of unilateralism," he said.

At the leaders' declaration, G20 economies agreed to harness the power of technological innovation, in particular digitalization, and its application for the benefit of all.

A special session on digital economy was held during the summit, and the G20 leaders adopted the Osaka Declaration on Digital Economy, affirming "the importance of promoting national and international policy discussions for harnessing the full potential of data and digital economy to foster innovation," so as to "keep pace with the fast-growing digital economy and maximize the benefits of digitalization and emerging technologies."

"Big data, AI, the fourth industrial revolution, they are progressing rapidly," said Japanese Prime Minister Abe at the press conference after the summit, adding that regarding data, there is a need to create new rules.

On development, the G20 leaders said they are resolved to play a leading role in contributing to the timely implementation of the 2030 Agenda for Sustainable Development and the Addis Ababa Action Agenda.