Italy says an artistic 'thank you' to China

Sorry I don’t know you in person. Today, I saw your painting on Twitter. It was reported that an Italian netizen identified as Enrico Turcato first uploaded your painting, which became popular among Italians and Chinese yesterday.

I can’t read Italian, but from Enrico Turcato’s original tweet I could guess the meaning of a few Italian words: Napoli, Aurora, Cina. I checked them against Chinese reports and found that you’re an 18-year-old from Naples called Aurora who did the painting to praise all those fighting the novel coronavirus in Italy, including medical experts from China. I noted that you adorned the Chinese doctor in your painting with an image of the Chinese flag.

Your painting, showing two doctors striving to back up Italy, vividly conveyed your message: thanks to those working on the front line to fight the virus, including medical staff from China. You have given the word “gratitude” its most gracious definition. But you’re not the only one who feels grateful.

Beneath Enrico Turcato’s tweet, a Chinese netizen called Li Yichen wrote: “I am a college student from China... We Chinese are grateful to Italy for its assistance to us during the earthquake...”

He referred to the devastating 2008 earthquake in Wenchuan, Sichuan Province, when Italy dispatched a team of medical experts to help treat hundreds of injured people. Shen Ji, head of the Sichuan health commission, recently told China Central Television that people from Sichuan are especially grateful to Italy for their help, and that’s why doctors from Sichuan volunteered to join the medical team this time to help Italy. The team arrived in Italy on March 12, together with 31 tons of  equipment and materials.

So, Aurora, your painting reminds me of an ancient Roman saying: “We are waves of the same sea, leaves of the same tree, flowers of the same garden.” These words were actually printed on packaged materials some Chinese entrepreneurs had prepared to be sent to Italy.

We think alike, in drawings and in writings, from the West to the East, from ancient to modern times. What bonds us together is our shared gratitude toward each other as human beings, not to be divided by borders or bias.

The current novel coronavirus broke out in Wuhan, central China, in December. Chinese doctors and nurses have accumulated  experiences which may be helpful to Italy and other countries in need. Key to China’s medical plan is early detection, early isolation and early treatment. Sun Shuopeng, head of the Chinese medical team in Italy, said the situation in Italy should change for the better despite current challenges, because the Italian government has taken strong measures like limiting traffic and the whole of society has begun to meet the problem head-on.

The novel coronavirus will retreat, eventually. In its fight, China has received support from more than 70 countries and regions including Italy.

We speak different languages, we live in different places, but the moment we learn to think with each other, not about “us” and “them,” we transcend borders and bias. I heard that the Chinese national anthem was played in a community in Rome yesterday as local residents belted out “Grazie, Cina.”

As a line from “Turandot” said, darkness will disappear. At the break of dawn, victory will be won. In the case of the current battle on the novel coronavirus, the victory will be to all of us who fight as one.

Grazie, Aurora, your painting presents the better angels in everyone. 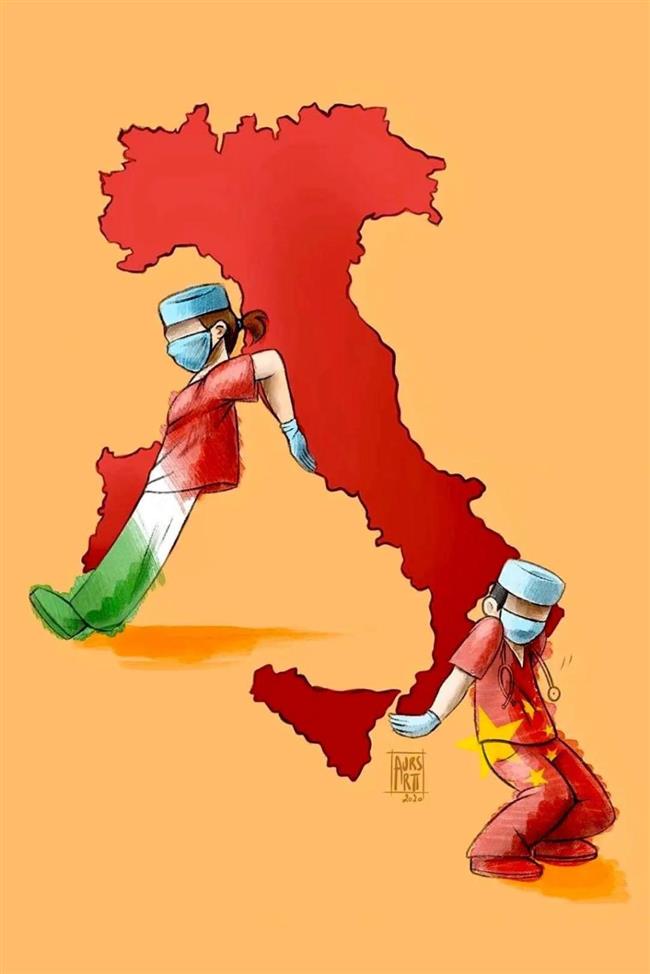 Aurora's painting shows two doctors, an Italian and a Chinese, striving to back up Italy.