A vision of sustainable living in carbon-free cities 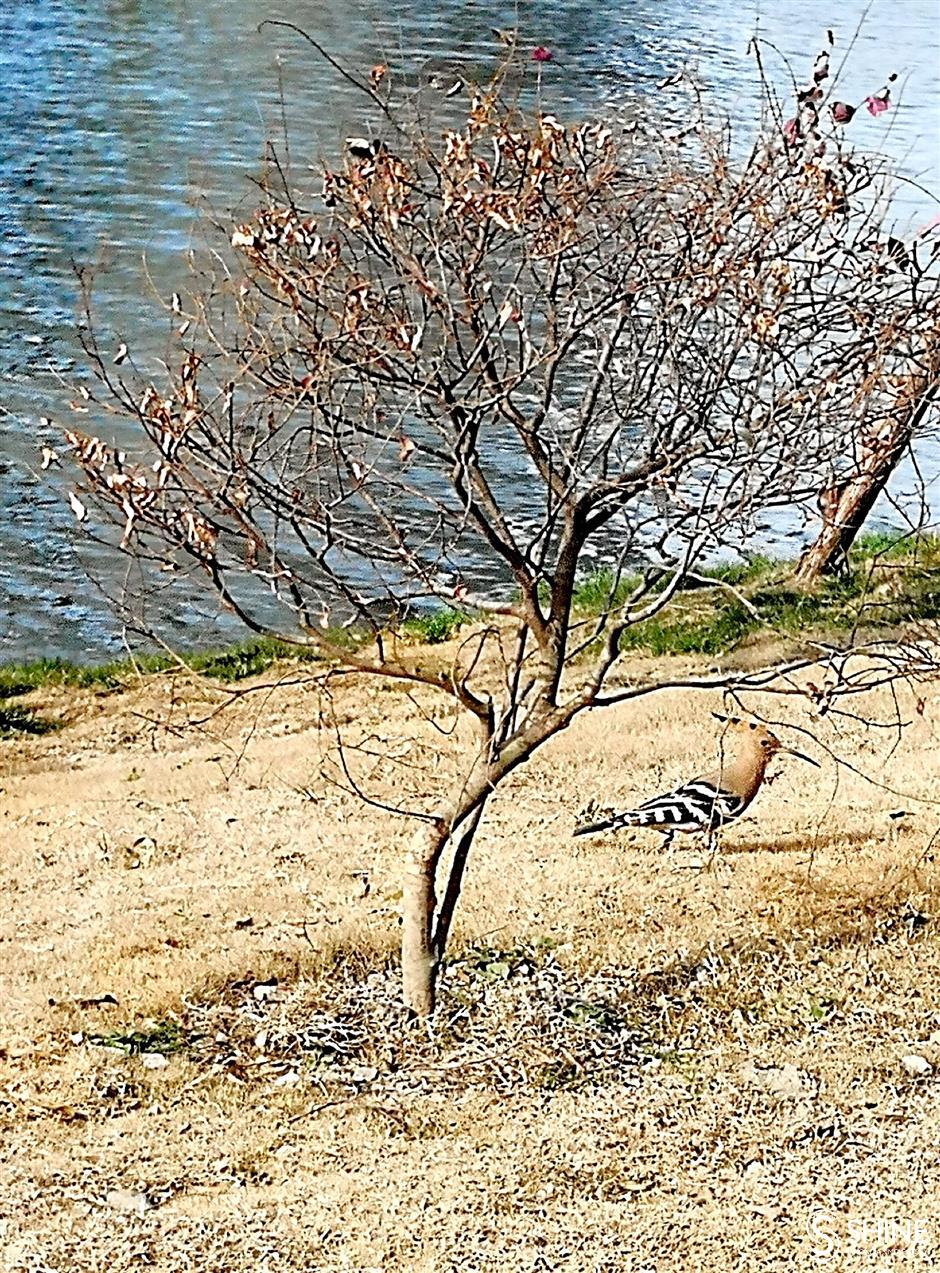 A hoopoe roams along the Chuanchang River that runs across the city of Yancheng in neighboring Jiangsu Province.

A few weeks ago, as we rambled along a big river that runs deep and green across a coastal city north of Shanghai, my wife and I had a surprise encounter with a pair of brown-necked birds with long beaks and “crowns” of feathers we had never seen before. They were digging into the grass on riverside slopes with their scissor-shaped beaks for food.

As I approached one of them, it raised its head and looked at me sideways, apparently at ease. It then turned its eyes away from me and continued to work the grassland as if I were non-existent. I stood only a couple of steps away — a distance that would disquiet most other birds, like herons, in an urban environment where humans dominate.

After I returned to Shanghai from the city of Yancheng, Jiangsu Province, I learned from a friend that the bird is a hoopoe, a rare wild bird with protected status. Later, my wife discovered it was a recurring image in many ancient Chinese paintings, but seldom could we find it in urban areas — until this chance meeting at a downtown wetland by an ancient river.

For many years, I have been traveling to Yancheng every winter to accompany my in-laws. Never before had we found the area by the river so beautiful and hospitable to wildlife. When it isn't scared by the approaching steps of a stranger, a rare wild bird seems to be at home in the newly created “urban wilderness” — a term I coined to contrast to an “urban concrete forest” where the planet's skittering life is hardly felt.

Letting a city breathe matters. It shouldn't be choked with carbon emissions from cars or clusters of high rises. Vast areas of wetlands and forests in the middle of a city improve urban living in no small measure. Certainly, energy-saving technologies and non-fossil fuels are key to reducing carbon footprints, but forests and wetlands are no less important.

The Chuanchang River that we strolled along was originally dug during the Tang Dynasty (AD 618-907). In its heyday, the river ran about 200 kilometers from north to south as an artery of commerce, transporting such commodities as salt. Yancheng literally means "the city of salt" in Chinese.

Today, it’s not just a river but an ecosystem strewn with cascades and wetlands on both sides. It all began last May, when the city threw its weight behind the construction of its first wetland park along a 2.8-kilometer stretch of the river. The wetland park covers about 260,000 square meters, including five of the river's tributaries, and will be completed by the end of January. Forestation of the wetland will be finished in the second half of this year. 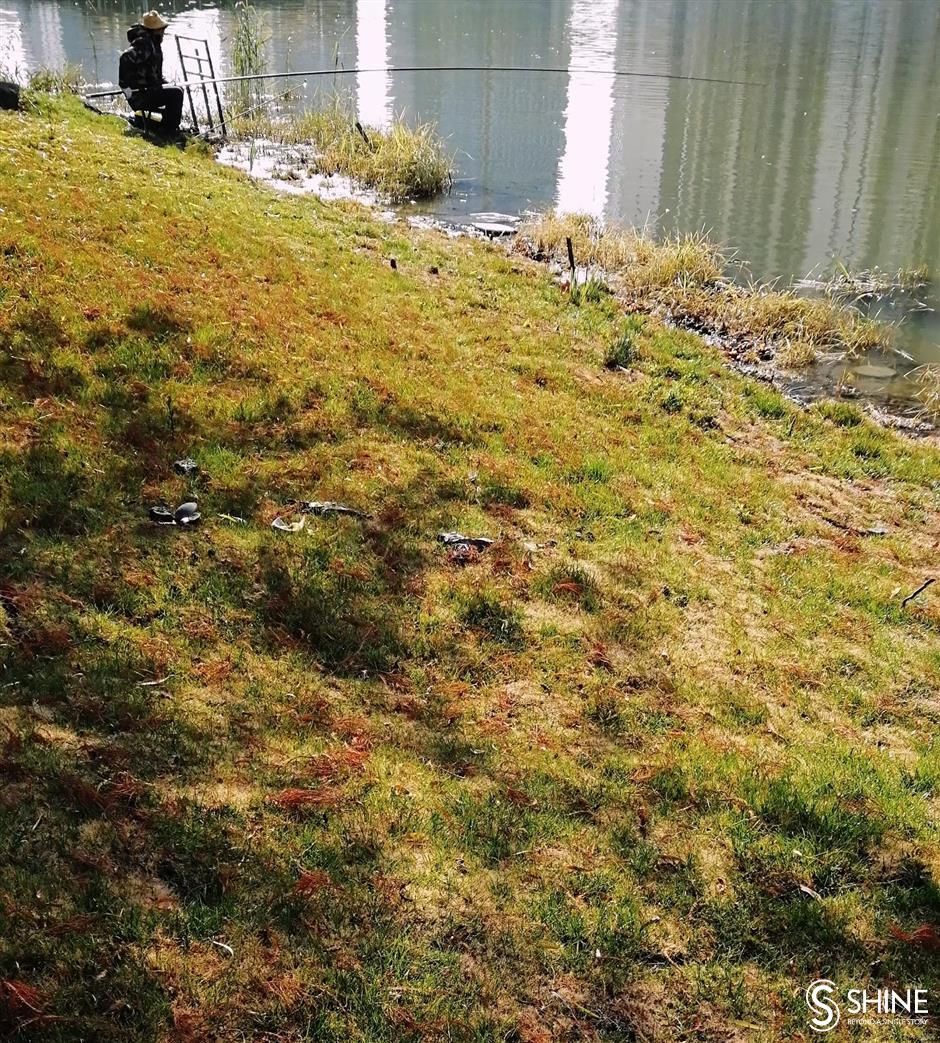 A man fishes in the ancient Chuanchang River in downtown Yancheng.

The gradual rebirth of the once-polluted ancient river epitomizes the city’s effort to embrace biodiversity and reduced-carbon living, as China works to peak carbon dioxide emissions by 2030 and become carbon neutral by 2060 — a promise Chinese President Xi Jinping made and reiterated to the world last year. As a guide for China’s development this year and beyond, the latest central economic work conference held in Beijing at the end of December prioritized meeting the two goals on time.

Renowned American climate researcher Ryan Orbuch says controlled forestation, algae and kelp farming, and biomass energy will go a long way toward sequestering and reducing carbon dioxide. He explains that CO2 absorbed by trees becomes part of their biomass. When forests are well managed, they are effective in the long-term removal of CO2 from the atmosphere, a process known as carbon sequestration.

“For permanent sequestration, we’ll need to do something with the biomass of forests," Orbuch said. "This could include making biomass into wooden building materials and biochar fertilizer, or dropping it into the ocean. Or if the forest is well managed, it can grow for centuries, and we can consider the sequestration ‘durable’ as long as that management persists and is monitored.”

With a coastline of nearly 600 kilometers, the longest in Jiangsu Province, Yancheng lends itself to wetland preservation and offshore wind power generation, both of which contribute to a low-carbon way of life. People’s Daily reported that Yancheng has the largest and best-preserved pristine coastal wetlands on the Asian continent's western Pacific. Since last year, the city has been extending wetlands to downtown areas. Parts of the Chuanchang River valley have been revamped into a pedestrian paradise wedded to forested wetlands right in the center of the city.

“We have collected a range of ground-based and satellite data-driven evidence to form a consistent and robust narrative about the Chinese carbon cycle,” a researcher told the BBC. The British news organization further noted that China’s burgeoning green footprint has been evident for some time, as billions of trees have been planted in recent decades. 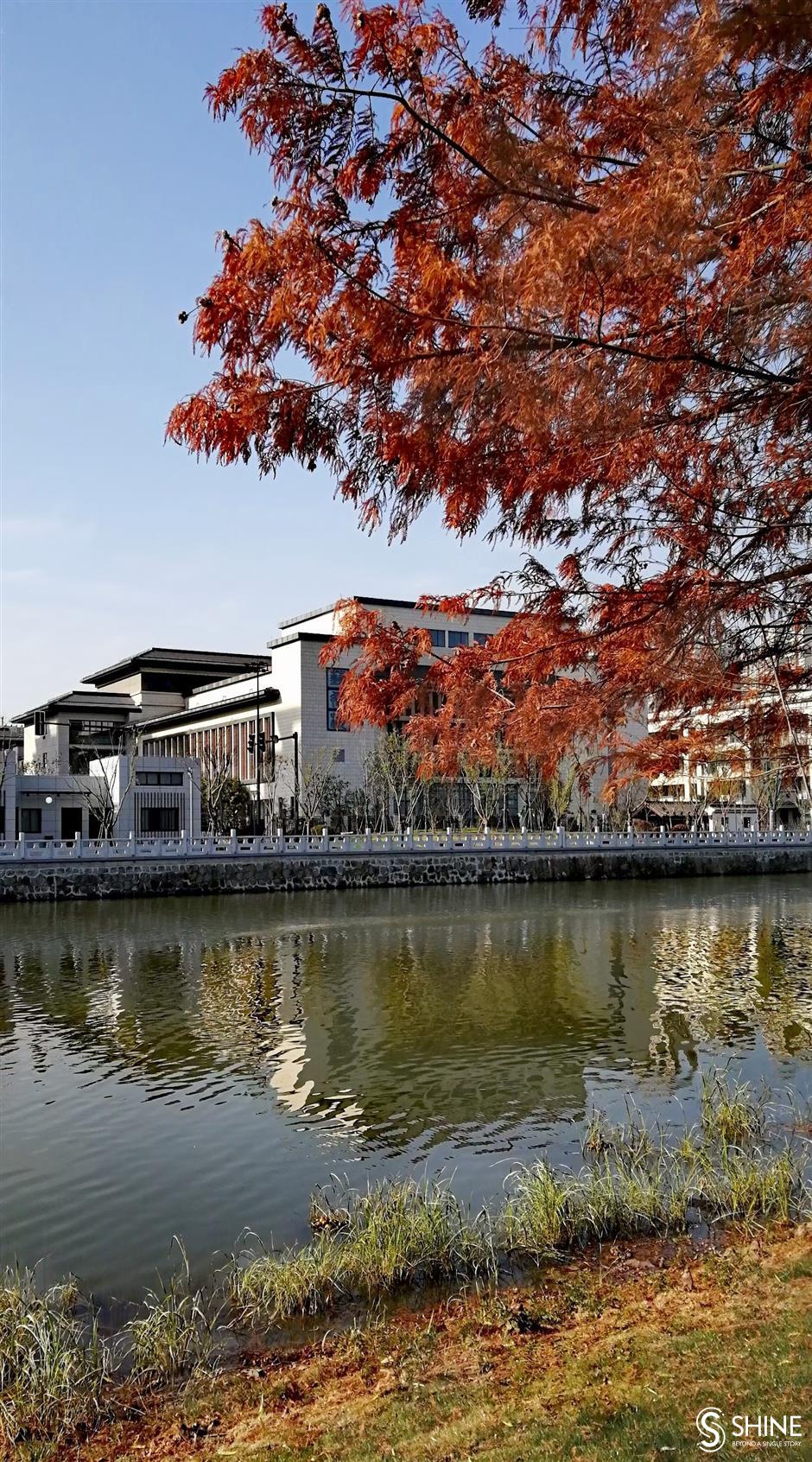 Across the Chuanchang River is a newly built primary school

In Yancheng’s case, about 40 percent of the city proper is now forested and about half of its wetlands are well preserved. That partly explains the appearance of rare birds in downtown areas. To share my joy, I sent a couple of photos I had taken of the hoopoe to Greg Cusack, a retired US congressman from Iowa and my pen pal.

“Thanks to the wonders of the Internet, I was able to ‘visit’ Yancheng, with the help of a beautiful bird's-eye video tour of the lovely city that I can see is a good distance north of Shanghai," he replied. "The video included a truly beautiful song in Chinese (which I, of course, could not understand) sung by a young woman with a lovely voice. The melody was most pleasant. I saw a lovely footbridge over the river, and the wonderful large sculpture (of a bird and reindeer) on the approach to the city.”

Last week, the provincial government of Jiangsu pointed out in a published letter that rivers in Yancheng are extremely clean and clear most of the time, and so is the air.

Yancheng is not alone in telling a new urban story. Shanghai announced last week that a 2-square-kilometer water and forest park will be built this year in Pudong along the Huangpu River. It will be the largest green land in downtown Shanghai, featuring more than 30,000 trees that cover an area of over 90 hectares.

Since last month, Yancheng and Shanghai have been linked by high-speed trains that shorten one-way transportation between the two cities from four or five hours to about two. By increasing wetlands and forests in downtown areas — right in the middle of central business districts — the two cities illustrate China’s carbon-neutral vision of future urbanization.

Given China’s continuous efforts to reduce carbon emissions, Nicholas Stern and Fergus Green, researchers at the London School of Economics & Political Science, said that China is likely to reach its carbon dioxide peak earlier than promised.

Watch China’s efforts to explore non-fossil fuels, such as wind and solar power. But if you neglect a new type of urbanization that China champions — turning a whole city into a forested wetland — you might be missing something crucial to understanding China’s contribution to the world’s sustainable growth.

Certainly, there's a long way to go before most cities become carbon neutral, but where there's a will, there's hope.

Special Reports
ADVERTISEMENT
61863
,
How to turn a lifeless apartment into your Home Sweet Shanghai
Time to make dog-raising regulations bite
Guarding against all forms of pseudo multilateralism and sticking to the right path
A tribute to those who risked their lives to save Jews
Government officials going the distance to update residents about virus
Appy days: Zen inducing apps for calm commutes
How to tell opinion from fact: Do you live in a world of two realities?
Working with Chinese partners in animated films brings us together
The need for a Swiss army knife in the connected world
China's positive economic performance is good for all
EXPLORE SHINE