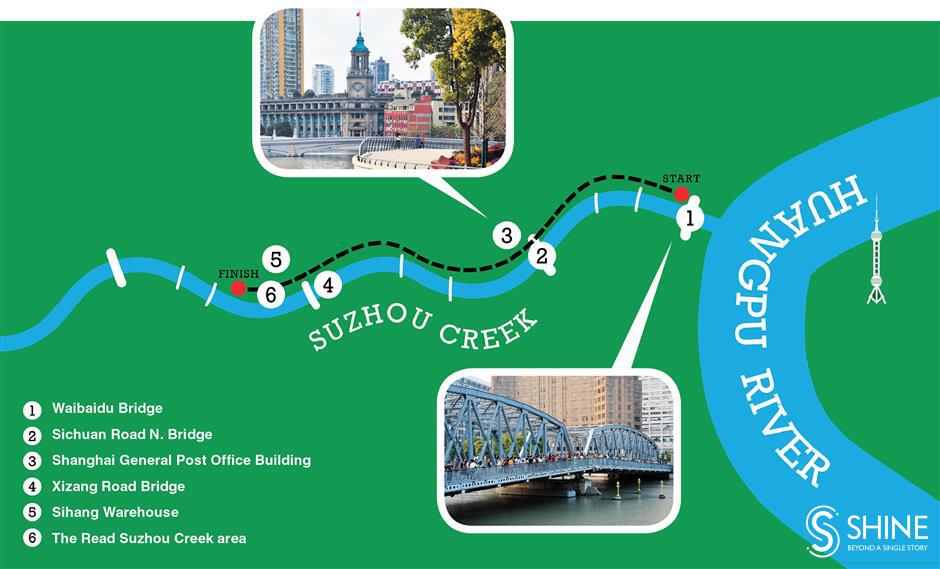 Often overshadowed by its bigger and more famous brother, Shanghai’s Suzhou Creek — it’s really a river, by the way — is one of the city’s most pleasant stretches. Come with me for a 30-minute walk along my favorite 2 kilometers, passing numerous historical sites while enjoying some natural peace and quiet at the same time.

The Suzhou Creek, so named because it runs between Shanghai and Suzhou, spans 125 kilometers, 54 of which are within Shanghai and have recently been revitalized to provide uninterrupted walking paths, new gardens and ample resting areas.

My favorite 2 kilometers begins near the Bund at the Waibaidu Bridge, before heading west along the north side of the Suzhou Creek until we reach the Sihang Warehouse, recently made famous by the movie “The Eight Hundred,” and a 400-meter riverfront area called Read Suzhou Creek.

This walk will take you just 30 minutes. Let’s start!

Our walk begins at the Waibaidu Bridge, probably Shanghai’s most famous. It was erected in 1907, and taken completely apart again in 2008, 100 years later, for complete refurbishment. So much history happened here, including the 1915 assassination of then Shanghai’s top military officer Zheng Rucheng and occupation by the Japanese from 1937 to 1945. This is China’s first all-steel bridge and, in Shanghai style, lights up in different colors in the evening.

The Battle for the Liberation of Shanghai, a 16-day series of skirmishes that began in Baoshan District, came to a head on May 25, 1949, when a final push by the People’s Liberation Army to oust the Kuomintang hit the banks of the Suzhou Creek.

The PLA attacked four bridges from the south of the creek — including this bridge – where they needed to cross to the north, which is where many KMT soldiers were holed up. In order to keep Shanghai’s valuable infrastructure as undamaged as possible, they vowed not to use artillery in the city center, but many PLA members were killed on the bridge while attempting to approach the post office.

Built in 1924, the four-story General Post Office Building, considered a high-rise at the time and located directly at the northern end of bridge, became the KMT’s stronghold. Because of heavy casualties on the bridge in front of the post office, this became the only place in the city center, during the entire Battle for the Liberation of Shanghai, where the PLA used artillery.

Today, the Shanghai General Post Office Building is no longer a post office, but you can visit the Shanghai Postal Museum inside, which is free.

This bridge was made famous recently by the movie “The Eight Hundred” (see No. 5).

The Sihang Warehouse, otherwise known as the Four Row Warehouse, was the site of a four-day battle between Chinese forces and invading Japanese back in 1937. The battle, right across the river from the then-International Settlement, took place in front of the world’s media and led to a morale boosting, albeit small win for the Chinese side. The battle of the Sihang Warehouse was the subject of the popular Chinese blockbuster, “The Eight Hundred,” which was released last year.

The end of our walk takes us to this newly refurbished 400-meter area of riverfront that begins opposite the Sihang Warehouse. The area features new gardens, outdoor tables and chairs, and a line of engraved poetry about the Suzhou Creek for you to enjoy. Each poem is presented in Chinese, English and Braille. The area from the Xizang Road Bridge to here also features traditional cobblestone roads, and you can find a large 1953 map of the river engraved in the ground.

I hope you enjoy this walk along my favorite part of the Suzhou Creek, traversing some of Shanghai’s most intriguing recent history. Be sure to check out the southern side, too, which is also well worth the walk.