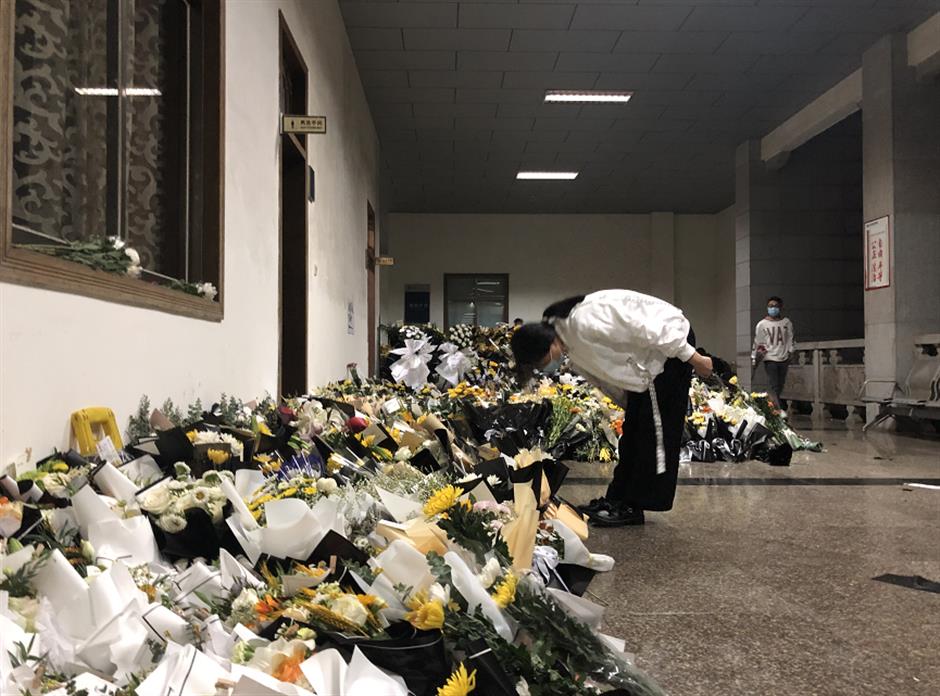 A high school student bows after laying flowers to mourn for Yuan Longping.

"If heaven has a form, it must be a fragrant rice field."

"He's entered a world of dreams, where rice stalks are higher than Chinese parasol trees and each rice kernel is bigger than a peanut. Wearing a straw hat, he sits under the tall rice plants and enjoys the gentle breezes."

My eyes brimmed with tears when I read these online messages from my fellow countrymen. They were mourning Yuan Longping (1930-2021), a great agronomist who passed away on May 22.

Dubbed "the father of hybrid rice," Yuan helped China feed nearly a fifth of the world's population with less than 9 percent of the world's arable land.

These two messages, which moved the hearts of myriads of Chinese, referred to Yuan's two hopes – to enjoy the cool shade under tall rice plants, and to grow hybrid rice all over the world to solve global food scarcity.

In a way, his hopes were being realized thanks to his relentless scientific progress and his unreserved support to many foreign countries and regions.

Certainly, no scientist can alone solve the world's food shortage. What moved the nation, even a large part of the world, was Yuan's single-minded pursuit for the common good of humanity. All his life he toiled and sweated in the field, talking with peasants and experimenting with hybrid rice strains. He hardly had time to think for himself, and he donated much of his rewards to promote scientific research.

Xinhua cited doctors as saying that Yuan still inquired about the weather and temperatures, which were critical for crop growth, even when he was in hospital. "He was already in very poor health, but still cared about his rice crops," his doctor said. 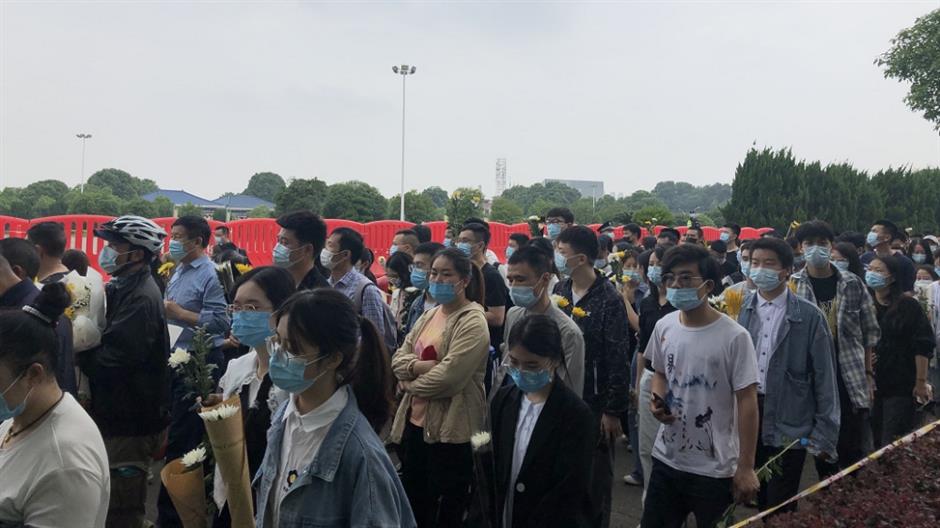 People from around China, many of them youngsters, line up to mourn for Yuan Longping at the funeral home.

Over the past 40 years, Yuan and his team had shared their methodologies with some 14,000 students from nearly 80 countries, CGTN reported. It also said that Yuan, in his old age, had traveled to Africa to help solve technical failures and boost harvests.

The hybrid varieties he developed have been grown in over 40 countries, including the US, Brazil, India, Vietnam, the Philippines and Madagascar, CGTN said. He was also trying to cultivate salt-alkali tolerant rice to further boost the world's grain output.

An American named Kevin posted an online message in memory of Yuan: "This is what a true internationalist did to our world: devoted to keeping everyone on earth away from hunger. He and his contribution will be remembered forever." A Briton called Josh Jackson said in an online post: "Most people don't know but Yuan Longping is one of the most outstanding figures in the history of agriculture – he developed a new form of rice that yielded 30 percent more than normal. Not only did Longping help solve food security in China, but also in areas across the world."

Kenneth M. Quinn, president emeritus of the World Food Prize, said in an interview with Chinese reporters that Yuan was "incredibly humble, never seeking fame or adulation, rather focused only on hard work and results that could help eradicate poverty and lift people out of hunger."

In China, official figures revealed that articles in memory of Yuan have been read and reread about 40 billion times across the country, with 800 million comments and messages left.

It's especially heartening to see millions of Chinese young people, from students to workers, expressing their gratitude to whom they call "Grandpa Yuan."

"If heaven has a form, it must be a fragrant rice field." This actually comes from lyrics written by a post-1990s man who has adapted a pop song and dedicated it to "Grandpa Yuan." He is from Hangzhou, Zhejiang Province, and his registered name is Easyone.

So far, the adapted song, titled "Rice Becomes Fragrant Because of You," has generated more than 23 million views, 1.5 million likes and 22,000 retweets on Douyin, Chinese version of TikTok.

Two days ago, China Central Television broadcast a scene in which huge crowds of young people joined a massive mourning event to bid their farewell to Yuan. The broadcast has generated more than 55 million views, 10 million likes, 400,000 messages and 70,000 retweets on Douyin.

Yuan has left, but the seeds of love he planted will pass on – in the hearts and minds of future generations as well as in rice fields across the world.

The New York Times wrote on May 23: "His development of high-yield rice hybrids in the 1970s led to steeply rising harvests in Asia and Africa and made him a national hero in China, credited with saving countless lives."

The Washington Post reported on May 23: "On Saturday afternoon, large crowds honored the scientist by marching past the hospital in Hunan province where he died, local media reported, calling out phrases such as: 'Grandpa Yuan, have a good journey!'"

He who works for the people, and the people only, will be remembered by all. 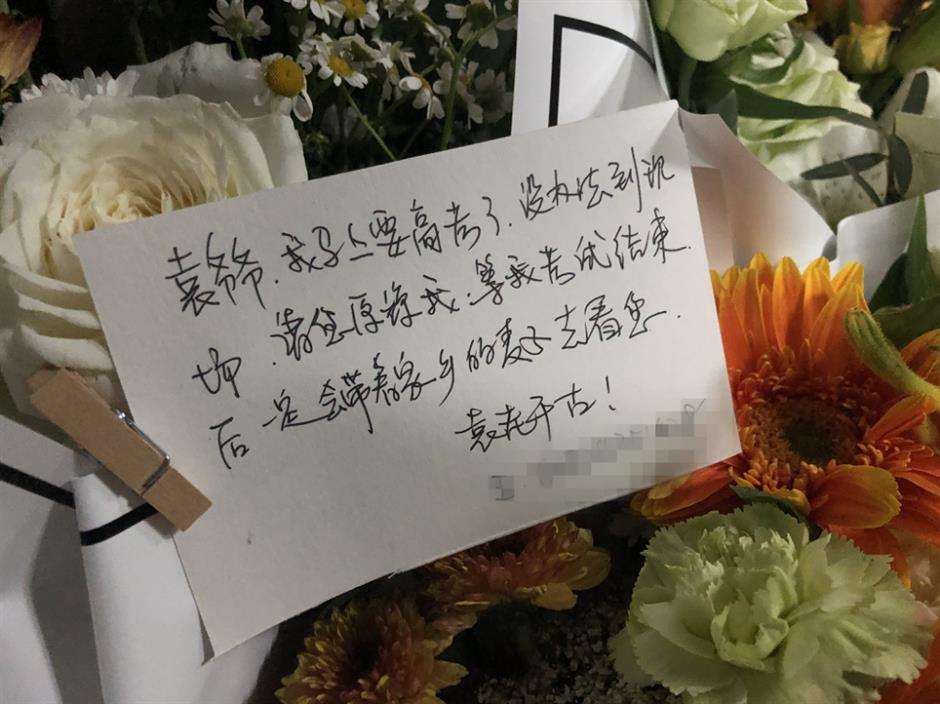 A touching message is left by a high school student saying he had to miss the funeral service because he has to prepare for the upcoming college entrance examination but promises to "visit" Yuan with rice seeds from his hometown after the exam.