East or West, all agree a thing of beauty is a joy for ever

A picture taken by a Chinese photographer featuring a creepy Asian woman has drawn a lot of attention. If a fraction of the notice it gets is deflected to the handbag she is holding, this is probably successful marketing.

The cultural discrepancy about what is beauty has been so much exaggerated that, if sustained, it might elevate this marketing effort to something more than a crudely conceived and ruthlessly executed sales stunt.

A thing of beauty is a joy for ever, for it explicitly refers to the quality of pleasing to the senses or to the mind.

It is culture specific to an insignificant degree, so any attempt to exploit it has thinly veiled supracultural overtures.

Instead of consulting a cross-cultural expert on this matter of beauty, a simpler and cheaper approach is to take a 6-month-old baby to the woman in question and monitor the response. Would the bub cuddle up to the woman, or take alarm?

Similarly, in this matter of beauty, although some confusion might creep in as a result of decadence-induced predilections, we could always revisit our earliest cultural fountainhead for enlightenment. 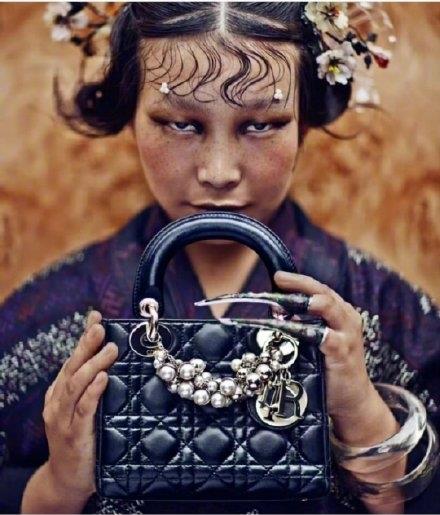 In "The Book of Songs," China's earliest anthology of poetry edited by Confucius, the first of the "five classics," there is a well-known poem celebrating a virtuous beauty:

"Her fingers were like the blades of the young white-grass;
Her skin was like congealed ointment;
Her neck was like the tree-grub;
Her teeth were like melon seeds;
Her forehead cicada-like;
Her eyebrows like (the antennae of) the silkworm moth;
What dimples, as she artfully smiled!
How lovely her eyes, with the black and white so well defined!"

To make up for the loss in this literal translation, James Legge went on to explain that these lines suggest her fingers were soft, delicate and white, her neck was white and long, her teeth were regular and white.

These qualities are equally pleasing today, though the beauty is infinitely set off by those lovely dimples and well-defined eyes.

By now you know what's wrong with the Dior model.

If you are still undecided, read Byron's "She Walks in Beauty."

"She walks in beauty, like the night
Of cloudless climes and starry skies;
And all that's best of dark and bright
Meet in her aspect and her eyes;
Thus mellowed to that tender light
Which heaven to gaudy day denies.
…
And on that cheek, and o'er that brow,
So soft, so calm, yet eloquent,
The smiles that win, the tints that glow,
But tell of days in goodness spent,
A mind at peace with all below,
A heart whose love is innocent!"

Could you see the smiles that win, or the tints that glow in that bag-toting woman?

If anything, she might as well carry torches and scourges, and be wreathed with snakes, like those revenge-seeking furies in Greek mythology.

For reference, these suggestions about beauty do not seem to have evolved much.

"Charles was surprised at the whiteness of her nails. They were shiny, delicate at the tips, more polished than the ivory of Dieppe, and almond-shaped. Yet her hand was not beautiful, perhaps not white enough, and a little hard at the knuckles; besides, it was too long, with no soft inflections in the outlines. Her real beauty was in her eyes. Although brown, they seemed black because of the lashes, and her look came at you frankly, with a candid boldness." (in the translation of Eleanor Marx-Aveling, Karl Marx's third daughter).

This is virtually a refrain on the celebrated beauty in "The Book of Songs."

So Dior is probably not totally clueless about beauty. The real problem is that it also knows that sensationalism sells today.

(Yang Zheng is a Shanghai-based freelancer. The views are his own.)