Years ago, back when I was but a neophyte in China, one of my favorite activities was to walk around town and go into restaurants where I didn't understand what the Chinese characters on the storefront meant. In order to get more acquainted with my new surroundings, I wanted to see what some of the spots in my neighborhood were all about and perhaps learn a few things about what to eat in my new area.

With no food delivery apps available at the time, I had no choice but to venture out and see what sort of grub I could find. I don't quite have that same bravado anymore, but those adventures introduced me to quite a few interesting spots.

I was developing my Chinese skills then; I'd studied the language in the US in college, but hadn't really had the chance to use it in practice very often until my move to the Middle Kingdom. So I'd only choose the kind of place that had no English on its sign and nothing in particular to beckon me inside other than perhaps a welcoming aroma or a bit of commotion and chatter at the door. 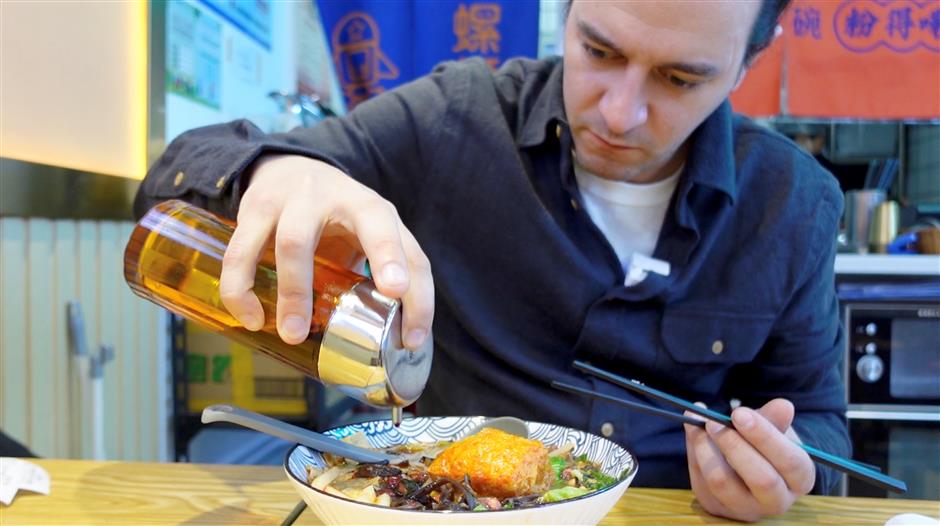 An adventurous spirit can unearth a vast cache of goodies.

I'd walk in and pore through the menu, at first looking for things with which I wasn't familiar. At one point, I had a folly with something called xuecai, which literally translates to "snow vegetable," served with bits of pork over rice. I had never heard of such a plant, so I gave it a shot. I'm not sure exactly what I was expecting, but what came to the table looked – and smelled – in my opinion like something roughly akin to pond scum. Sorry to offend any xuecai lovers, but... let's just say it's not for me.

So I grew a bit more tepid with my bravery after that experience and tried to stick to things where I had at least some idea of what would be presented to me.

I know it seems like a big gamble for many to walk into a place without really knowing what you'll be served. But fear not! Over the past several years, I've done some extensive field research, digging into different archetypes of delicacies in different categories from different regions of the country.

Here's a list of a few of my favorite spots. To qualify for the list, the food had to meet three criteria. First, it must be a type of food that has many restaurants widespread specifically dedicated to this type of food. It can't just be an item on a menu that some places have. Second, it needs to be something that isn't overly expensive. And finally, it needs to be something that, although ubiquitous, isn't necessarily common knowledge amongst Shanghai's expat community. I won't, for example, include dumplings or fried rice on this list. My personal top six types of "under-the-radar" cuisines; cue the drum roll... 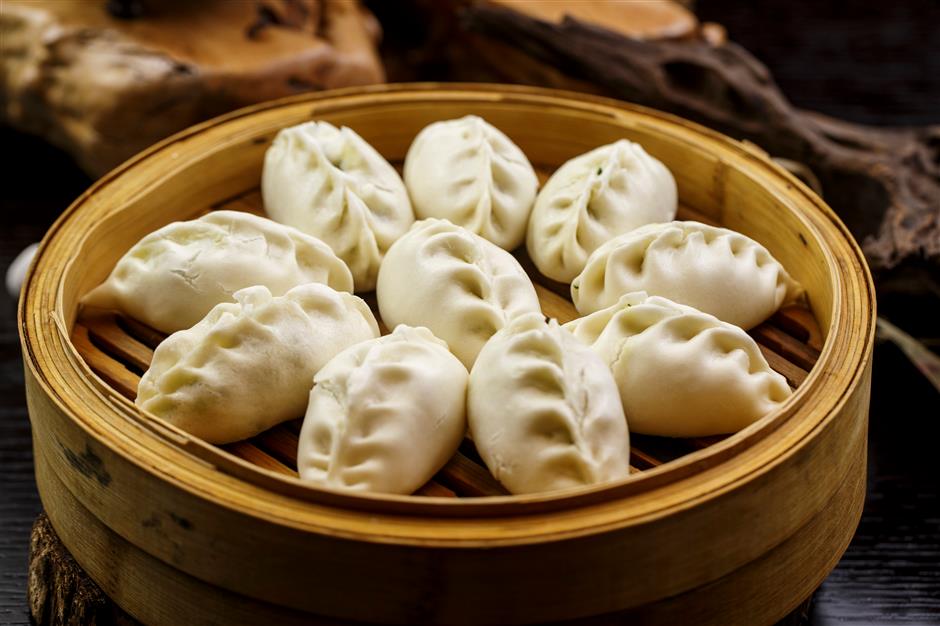 This extremely common restaurant isn't a chain; they're independently owned and operated and absolutely EVERYWHERE around the country. Its place of origin is the otherwise unassuming Shaxian County in Fujian Province in the country's southeast. These shops offer a variety of soups, noodles, won tons, small dumplings, and other classic comfort foods. Not exotic, but a solid go-to in a pinch. 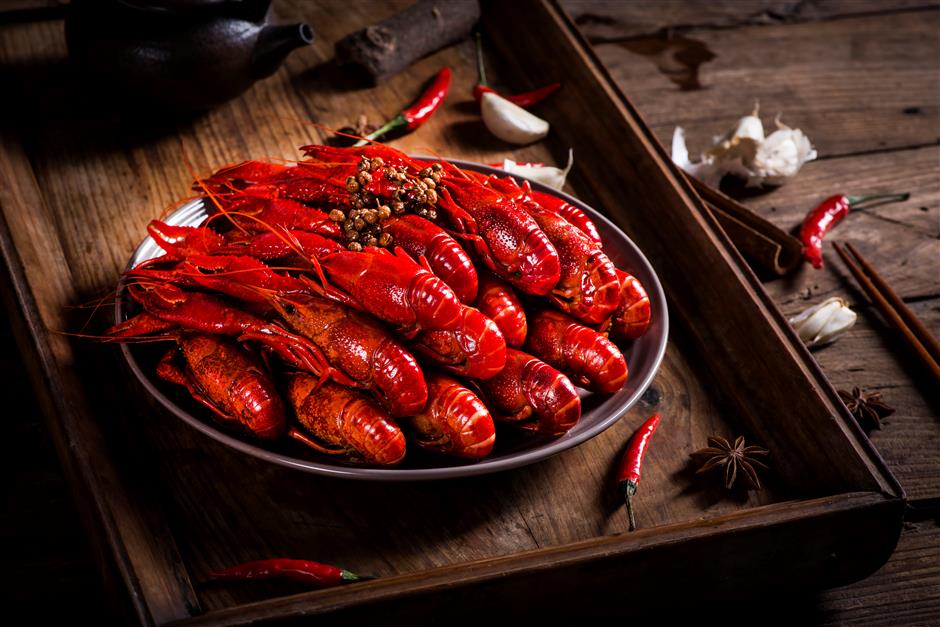 This one is a lot more well-known, but I think a lot of people stay away from it due to the notoriously tedious process of extracting the small amount of meat from the shell. These crustaceans seem like more trouble than they're worth, and while I do admit the ratio of effort to nourishment is high, don't let it scare you off. The summertime ritual of sitting outside with a giant bowl of longxia and a cold beverage is hard to match as a relaxing and tasty way to socialize and enjoy a night with friends. Just make sure not to wear that crisp, new white shirt. 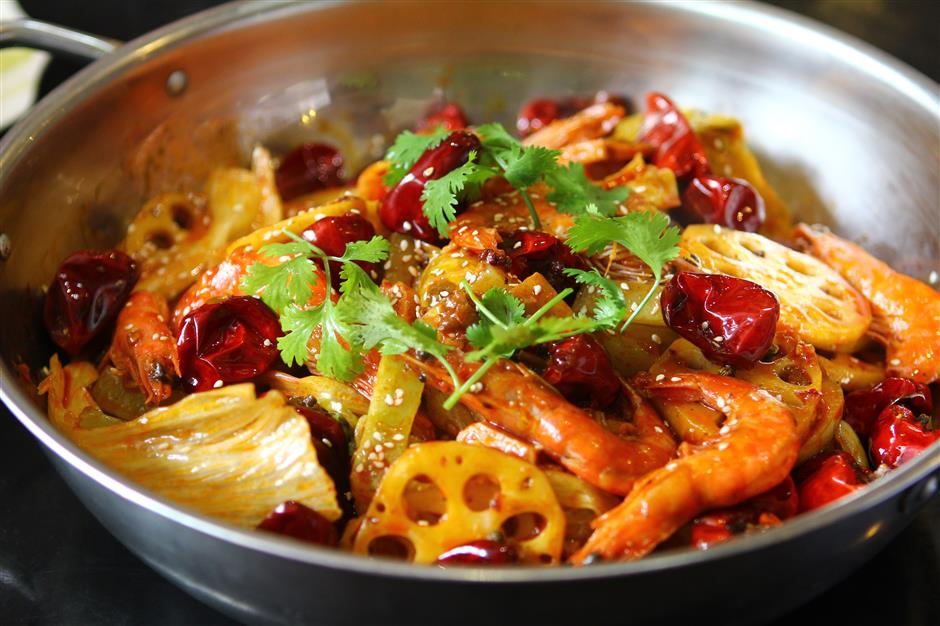 This gets a big boost for the freedom available to choose your own favorite ingredients. Different from the popular malatang, which is soup brewed up with your choice of various meats, vegetables, and other foods, this stir-fried version is essentially the same mishmash of various ingredients but cooked up and served soup-free in a spicy menagerie of goodness. Choose your meats, your veggies, and any other miscellaneous foodstuffs, and in the wok they go. Suitable for vegetarians, ardent carnivores, and everyone in between, especially if you can handle the heat. 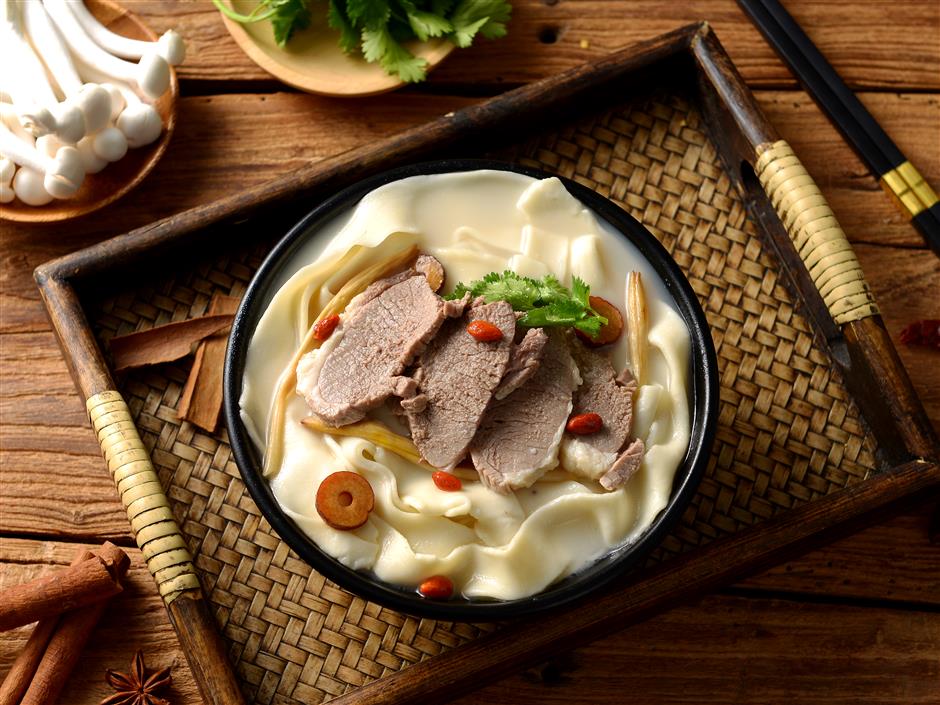 This dish, a specialty of Henan Province in the central region of the country, isn't one of the more common of the regional-gone-national specialties, but it's a personal favorite of mine. The thick-cut noodles in a strongly flavored broth made from lamb bones and herbs are hearty and warm you up instantly. I've found that shops prepare this dish a few different ingredients, but it's the noodles that carry the mail here. Savory and sometimes a little spicy, this one's great for a cold winter's day. 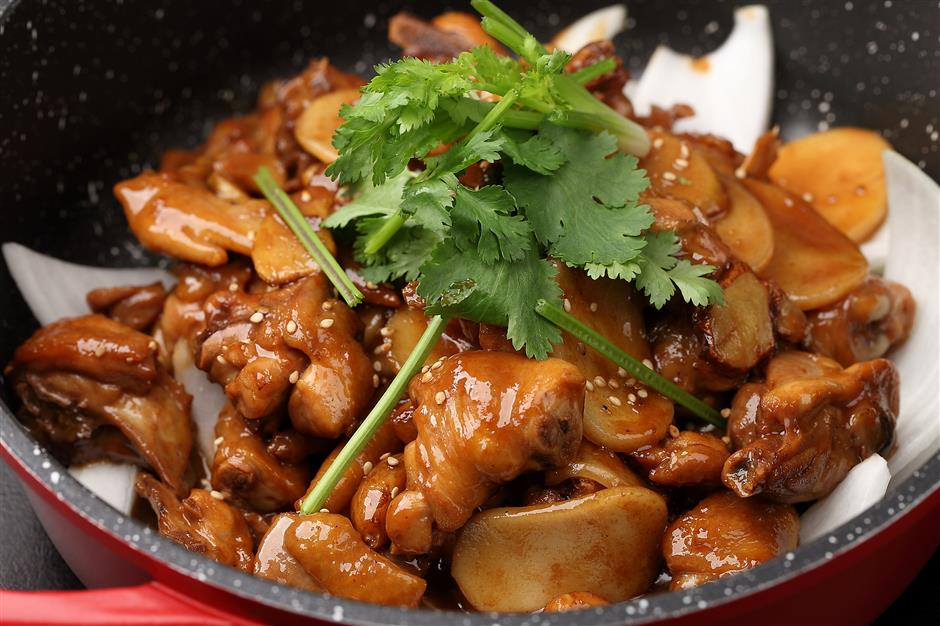 Despite coming in at number two on my personal list, this one is what inspired me to make this entire list in the first place. Unassuming and scattered all over the city, these little shops are a treat. Every time I bring friends to one who've never had it, they instantly fall in love. It's a simple concept; chicken is cooked with onions, celery, garlic, and chili peppers and placed on a burner on your table to continue cooking as you eat. The onions and celery soften to the point of melting in your mouth, and when you've finished, you can add soup to the remaining sauce, order some more raw ingredients, and have a hot pot second course. A can't miss. 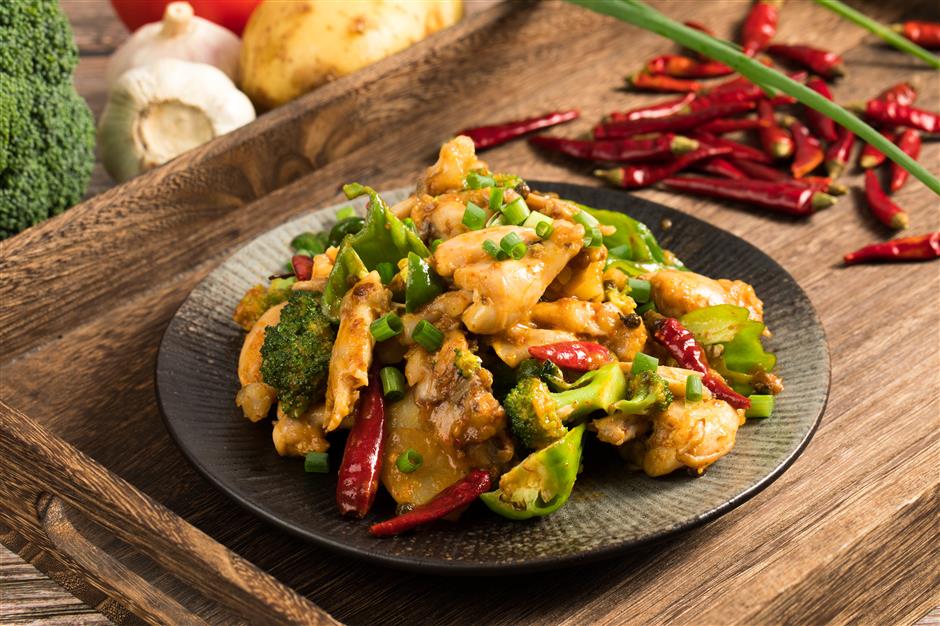 And the gold medal goes to... bullfrog! I know the idea of consuming the little hoppity amphibians makes some folks queasy, but those individuals are truly missing out. This simple dish is just bullfrog, pan-fried until the outside is golden and crispy, cooked with a mix of ingredients including, but not limited to, celery, lotus root, and thinly sliced, crispy potatoes. Years ago I frequented a place where they substituted sweet for traditional potatoes. Wonderful. Dip the meat into some rice vinegar and enjoy. 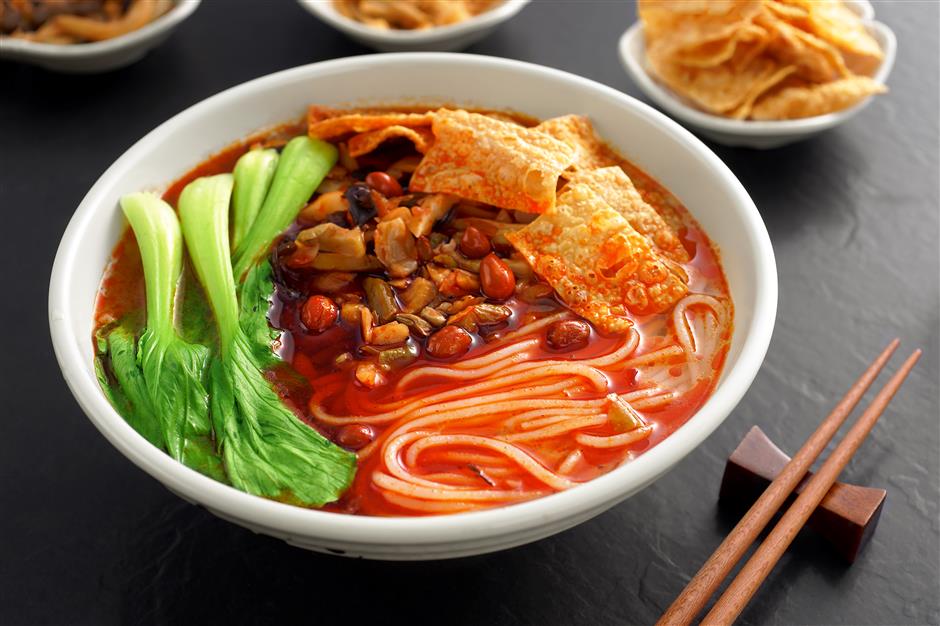 Over the past few weeks and months, I've continuously heard this term bandied about on the Internet. It carries with it a certain connotation; not unlike durian fruit or stinky tofu, it reputedly has a pungent odor that people either adore or abhor. I'd never tried it, so I had a go, bracing for the worst...

And it was pretty good! I will admit that it does have a bit of a distinctive smell that I can understand some people disliking, but overall, I thought it was a fairly solid meal. I'd refrain from directly eating the pickled bamboo shoots – STRONG flavor, just push them aside – but overall, I was pleasantly surprised to find that I didn't hate this at all the way many friends had warned me I would. It's a hodgepodge of flavors and colors in the bowl with an assortment of ingredients that add complex flavors. Even the snail meat is a bit crunchy but not too tough in texture. I would say that this one isn't for the faintest of heart, but if you're feeling bold, give it a go!

I know I've left out a boatload of other similar regional treats, but these are just my personal favorites and from my experiences to date. The next time you're tired of the same old fare, go out on a limb and give these a shot. Fortune favors the brave!