Graduation is an emotional moment for a lot of youngsters, including my son Zhengyang and his classmates, who are in their last days of senior high school, especially because the Class of 2022 will be denied a ceremony to minimize the risks of contagion of coronavirus.

After finishing their last day of classes on the morning of July 1, they left the school campus for the last time.

As they struggled to the school gate under the weight of the teaching materials accumulated over the past three years, the poignancy of the moment would probably elude them – they are too young to cast a backward glance. And their learning journey has not ended yet.

They will spend a week at home and then sit for the college admission tests, scheduled for July 7-9. 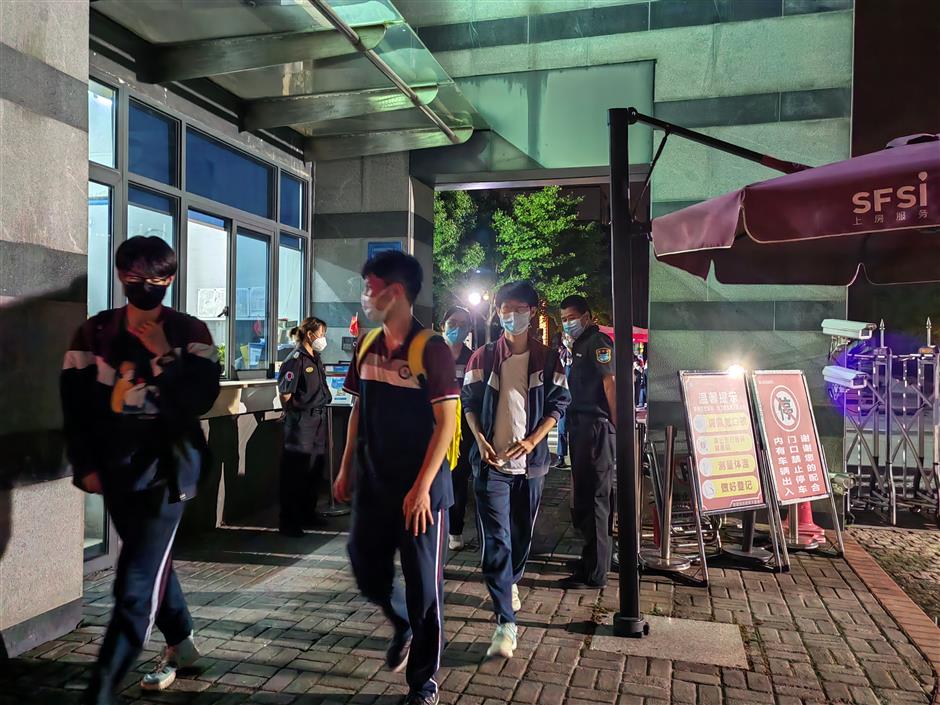 Students leave the campus of the High School Attached to Shanghai Normal University at 9:30pm on June 29. With the school closing in a few days, some students are already taking their study materials home. 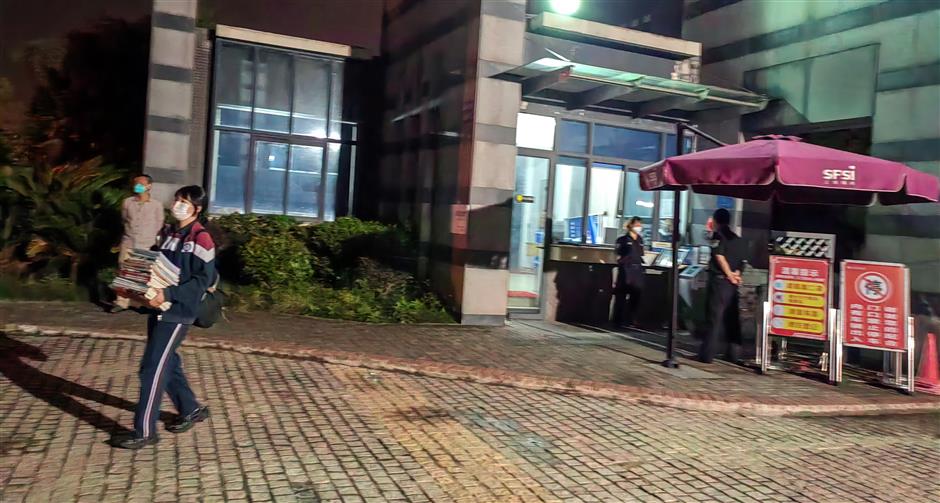 His class have also been denied a group photo that is customary for previous graduates. They have submitted their headshots, which will be photoshopped into a class photo.

After spending more than 80 days at home during the lockdown, the third-year students returned to the campus on June 6 to prepare for the college admission tests that were postponed for a month in Shanghai.

To ensure that the exams take place as planned, the students were told to return to the campus under strict protocols.

This meant daily early morning antigen self-tests for students and parents, and daily PCR testing for students at school. On June 26, my son had to be chauffeured to the school for the PCR test. The students are not allowed to use public transport, and unprecedentedly, have to carry their mobiles phones.

Rather than finding these measures cumbersome, parents are generally cooperative and supportive. Initially, many of them had even proposed closed-loop management for students before the critical tests to minimize the risks of contagion outside the campus. 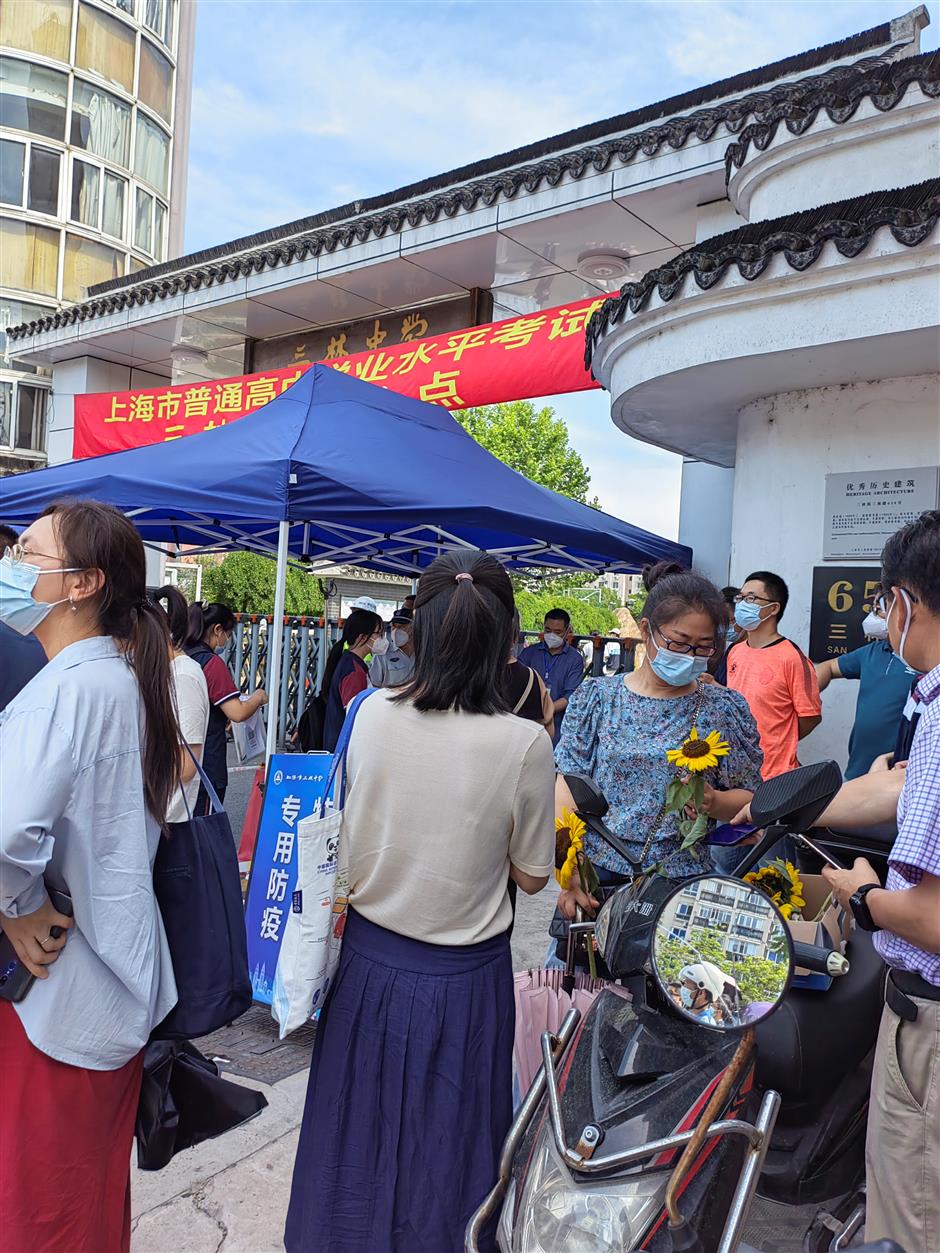 A teacher (right) hands out sunflowers to parents on June 18 outside the gate to a test center in Salin Middle School in Pudong. The senior high school students sit for proficiency tests that are part of the college admission tests. The sunflower's relevance is linked to the Chinese idioms yijuduokui and jiayou, which signify the parents' wishes for the best test results.

A couple of weeks ago, when a wholesale vegetable market near the school engaged in chaotic roadside transactions, parents were told to lodge complaints with relevant departments, not because such transactions were noisy and obstructive to traffic, but because of the risks of contagion. The avalanche of complaints had worked, and the site had been cleared up, at least for a while.

Such parental anxieties are perfectly justified. While matriculation test scores for students elsewhere in the country have already been released last week, students in Shanghai are still cramming in the sizzling heat.

How colleges across the country manage this gigantic dissonance in their enrollment would likely be a feat of dexterity, but apparently they do not lack precedents. In 2020, the college admission tests were also postponed for a month, though the 2020 lockdown fell far short of the rigors of the epic lockdown this year.

With the lockdowns instituted in the first and third years, and the specter of the pandemic lurking in the intervening year, a considerable portion of the lectures have been delivered online, prompting sarcastic comments that "Remote Learning" should be stamped on their diplomas. 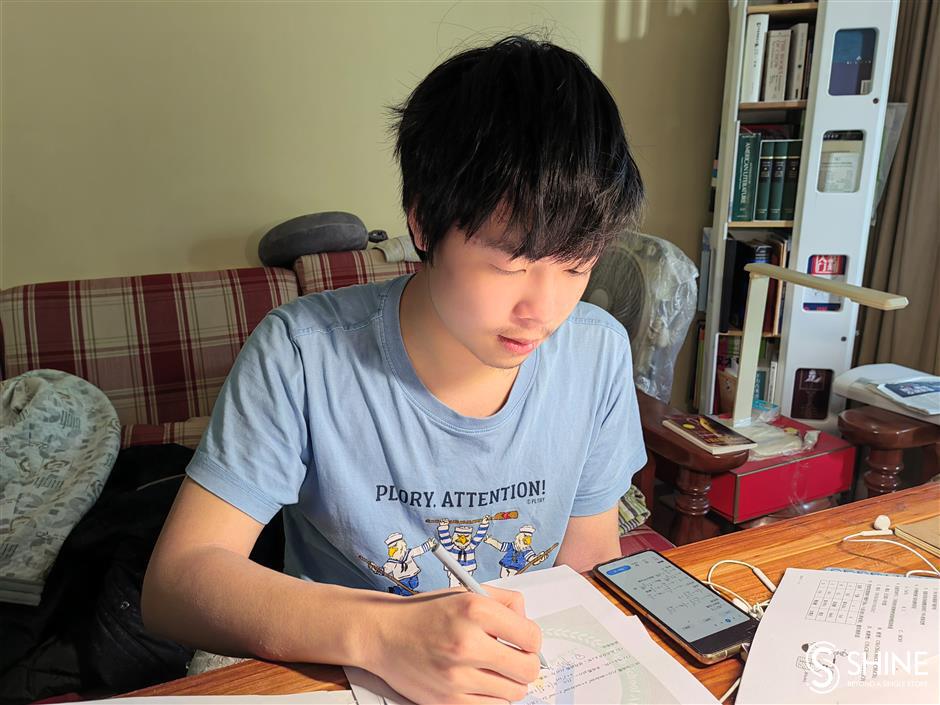 Wan Zhengyang, a third-year student from the High School Attached to Shanghai Normal University, attends an online class at home on May 8, during the lockdown. He will sit for college admission tests from July 7-9. The picture was taken as a tribute to the skills of volunteer who cut the student's hair later in the day, to throw into relief the student's improved appearance after the haircut.

One of my coworkers informed me a couple of years ago that his primary school daughter laughed out loud on hearing that the term exams were canceled due to the pandemic prevention, which caused her father to frown.

Another, more mature youngster once asked his father, with mock solemnity, as to his prediction regarding the pandemic. The father quickly realized that the real question was: "Will the coronavirus hold on till the summer holidays?"

Unbeknownst to many, the prolonged lockdown and online lectures can be physically and mentally exhausting for the students. Considering how grueling session after session of online lectures can be, I've heard of students who were listening to lectures lying in bed, which is probably not so outrageous as it first appeared.

There are also plenty of pedagogical ramifications. During the intensive review stage just before the exams, success would be much contingent on individual conditions and motivations.

More adaptable students might have coping mechanisms to deal with this situation – lectures prepared in a one-size-fits-all manner, delivered without context or feedback, and attended to without companions and effective disciplines – but my son did not appear to have an easy existence.

While there is consensus that the online teaching falls short of the real thing, in the absence of better substitutes, we can only hope that in the future we will be able to deal with the pandemic more cost-effectively so that all our students could enjoy their learning in the natural setting of the classroom.