Did the regulatory authorities go overboard in slapping Paris Baguette with a 'hefty' fine? 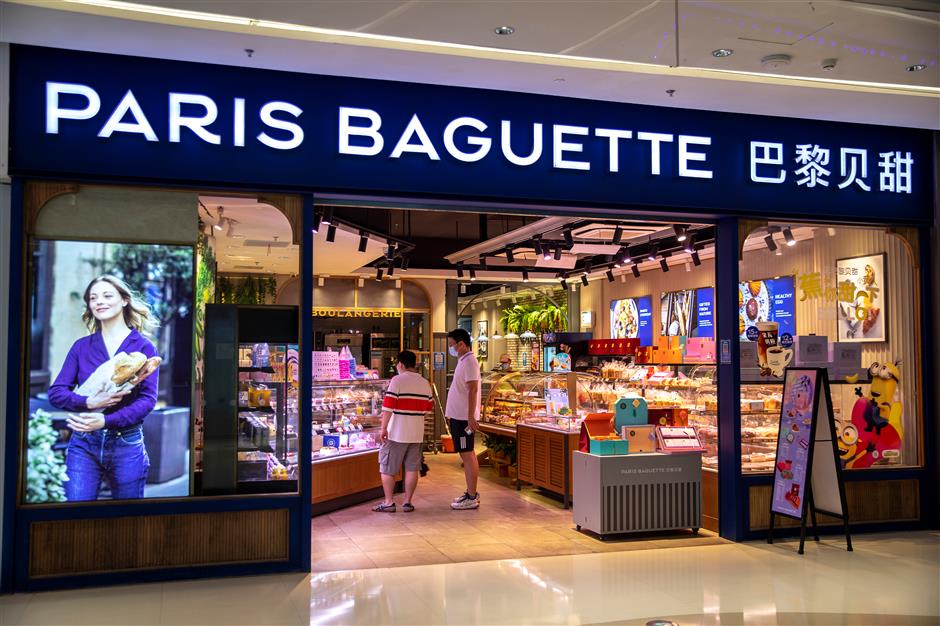 A Paris Baguette outlet in Shanghai.

The "hefty" 580,000 yuan (US$84,158) fine slapped on a bakery continues to fester, with some residents demonstrating their support by purchasing from the bakery.

According to the Shanghai Administration for Market Regulation, the bakery, a subsidiary of the popular chain Paris Baguette, was fined for violating food safety regulations.

It argued that its punishment was the least severe possible for such an offense.

Given the recent spate of food safety scandals, a large fine is usually viewed as an effective deterrent and usually goes down well with average consumers.

However, when the details of the violation were revealed, there was an outpouring of sympathy for the bakery, which was allegedly guilty of the offense during the city's lengthy COVID-19 lockdown.

While attempting to meet soaring community group-buying orders, the subsidiary resorted to a workaround: unable to bake at its dedicated facilities (properly licensed), it had to make do with a makeshift location at a training center on Laohongjing Road in Minhang District, between April 23 and 26.

Following a tip-off, the authorities raided the place on April 27 and discovered baking equipment, raw materials and delivery records at the center where some bakers were temporarily housed during the lockdown.

The bakery had already delivered about 400 sets of illegally prepared pastries at the facility, valued at 125–170 yuan/set, for a total of 58,500 yuan.

The money was confiscated, along with the baking equipment, and a fine 10 times the amount of the gains was imposed.

During the lockdown, resourceful group-buying entities began to emerge, attempting to innovate their own independent supply chain that proved to be efficient, diverse and generally affordable.

Of course, businesses that had been bleeding for more than a month due to the closures were eager to be pressed into service.

To keep things running, desperate measures such as makeshift facilities, unlicensed moonlighting vehicles and other substitutes were frequently required.

The tuanzhang (group buying organizers) did not bother to obtain a business license, and they freely dispatched their goods in public spaces not originally intended for business transactions, and I do not believe some of their earnings, which were substantial in some cases, were properly taxed.

These circumstances do not preclude them from being regarded as heroic figures today.

Tuanzhang would be nothing if the supply chain was not supported by so many restaurants, bakeries and grocery stores.

Residents who have made it through that difficult time are naturally grateful for everything, including the 400 sets of pastries from the bakery.

Following online outrage over the insensibility of the fine, the regulatory authority issued a statement on September 3, stating that affected enterprises can still challenge the decision through legal means, "and we will actively proceed well with our work."

The authorities also claimed that the fine, based on China's food safety law, was merely a slap on the wrist – if the authority wanted to throw the book, it could easily have slapped a fine 20 times the sales.

The fine, it said, was the lowest in proportion to the offense.

A fine of 580,000 yuan may seem insignificant to the market regulatory authorities, but it is enough to put many independent businesses out of business, even before the pandemic.

Because the market regulator and the general public appear to disagree on the magnitude of the fine, some citizens are showing their support for the bakery by shopping there. Long queues are being reported outside the bakery outlets.

An obstinate regulatory entity like this is not conducive to improving the business environment. The regulatory body should have sought legal advice.

Chen Yuefeng, a legal expert from East China University of Political Science and Law, told People's Daily that while the authorities had conducted a prior review of the relevant facts, applying legal provisions in isolation had resulted in errors.

"The crux of the matter is how to determine and assess the nature of the concerned party's behavior," Chen said, adding that in special circumstances, when an enterprise is confronted with competing obligations – in this case, operational legitimacy and the need to assist residents – the enterprise should be committed to its higher obligation, to the exclusion of the competing one.

﻿
Special Reports
﻿
Did the regulatory authorities go overboard in slapping Paris Baguette with a 'hefty' fine?
The 'offal' truth about exotic dishes: They bring people from different cultures together
Turning 60 but still working? The challenges of calling China's retirees back to work
The record-smashing heatwave is mercifully over
Chinese spikers in masks kick up a storm
The in-between cuisine: Western-style Chinese food
Don't bother. These wild guesses about foreign brands are simply rumors
Climate change heat is on, time to act now
What's in a name? It's just a matter of personal choice
America's hypocrisy over Taiwan reflects its longstanding playbook
EXPLORE SHINE