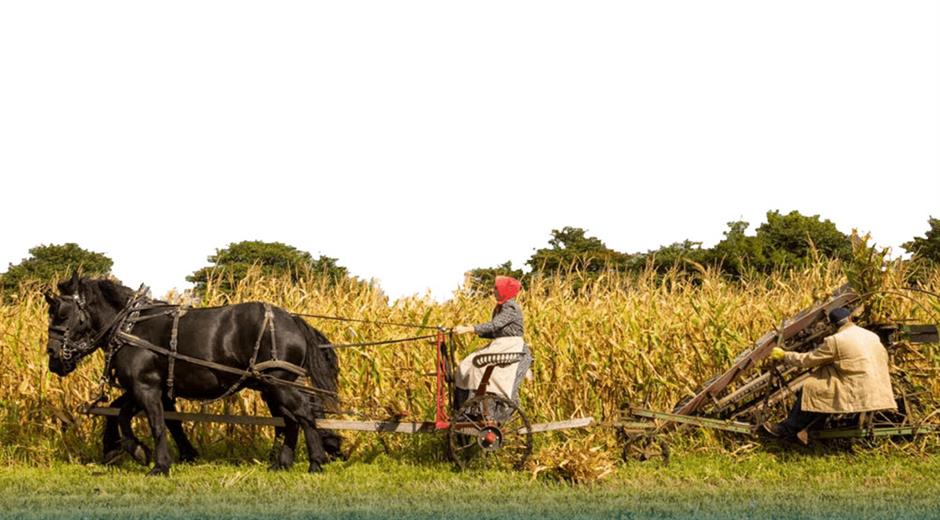 Outside Des Moines, Iowa, there is a living exhibit of farming “the way it used to be” in Living History Farms. You can see what they do for yourself on their website: https://www.lhf.org. This picture is taken from the website.

It was with great joy that I read Wang Yong’s “Escape to the countryside, the good earth.” (September 6)

I resonate with the theme of the critical importance of rural scenes and the many contributions that rural life offers us all.

Fei Xiaotong’s observation about the consequences of Western industrialization upon rural life — and, indeed, upon the purity of its earth, water, and air — are well-taken.

For five years in the 1980s, I had the privilege of serving as the executive director of the National Catholic Rural Life Conference, an important — if seriously long-underfunded ­— effort by the Catholic Church to affirm and reach out to residents of rural areas.

This was during the great “farm crisis” of the ‘80s when spiking inflation and costs of operating farms shot sky-high but when the prices paid for farm products remained stubbornly low.

Many farmers who had (unwisely) stretched themselves by borrowing during the boom years of the 1970s now found themselves unable to make the payments on those loans and, hence, the ‘80s also saw thousands of family farms go belly up. It was also a time when a marked rise in farmer suicides occurred.

Part of my job at the NCRLC entailed my traveling to every rural part of this large country, and that was an education in itself.

I averaged about 30,000 miles per year flying all over, from rural Maine to agricultural groves in Florida, to the struggling black farms of the South, to the rugged lands of the West.

I met farmers, ranchers, residents of small towns, local governmental officials, and also hobnobbed with other church workers and some of the writers/intellectuals who were warning of the continuing devastation of the people and land of rural America.

Almost everywhere I visited, I stayed with people in their own homes, inevitably learning a great deal about each family’s life as well as their history and current struggles.

While it was probably the most disappointing position I ever held — because I was so little able to help anyone in any substantive way — it afforded me the priceless opportunity to meet so many human beings whose experiences and daily lives were so very different than my own, the lessons of which I have never forgotten.

Today, in my home state of Iowa, the decline of true family-owned and operated farms continues apace; the average age of these farmers today is in the upper 50s.

Just outside Des Moines, Iowa, there is a living exhibit of farming “the way it used to be” in Living History Farms. (You can see what they do for yourself on their website: https://www.lhf.org.)

There they have people dressed in various period-accurate costumes that feature past ways of farming, and of rural life, from the days when Native American tribes occupied Iowa — the land between the rivers as the they called it — through more recent times.

They have even replicated a small 19th century village where one can wander through a barber shop, a grocery store, and watch characters re-enact popular games of that time.

One of my favorite places on that sprawling site is an operating turn-of-the-20th-century farm where one can see what we have, perhaps irrevocably, lost: diverse agriculture.

Today’s obsession with monoculture, in Iowa principally corn and soybeans, has come with a tremendous cost to the land which, because of the extensive use of chemicals and fertilizers, has also contributed to the large — and growing — “dead zone” in the Gulf of Mexico into which the Mississippi River eventually carries run-off from the fields of the Midwest, including Iowa.

Monoculture — which has also helped pave the way for agri-corporations acquiring huge parcels of land that formerly were occupied by family farmers (and small towns) — has meant plowing up groves of trees, emptying and using smaller bodies of water which provided migratory birds welcome rest spots during their spring and fall journeys, and the destruction of small towns which whither away when the family farms they served and depended upon vanished.

In Living History Farms one can encounter fellow living beings that most urbanites never encounter: majestic, muscled work horses, for example, but also flighty chickens, irritable (and easily aggressive) geese, lumbering cattle with their huge, liquid eyes, and even the grunting pigs that farm children once cherished as pets (despite popular depictions of pigs, by the way, they are quite intelligent and affectionate).

Yes, the smell of these creatures at first assaults your senses as we are unfamiliar with the odor of this plentiful life, but it is not all unpleasant.

Their body heat once kept their enclosed shelters sufficiently warm even in winter, and there is something mysteriously wonderful in bumping up against their various hides, whether feathered or leathery in texture.

Stroking a horse’s chin, or rubbing it gently between its eyes, is a lost joy for most.

When I was a boy, the part of my hometown where I lived had not yet been “developed” entirely, so there were two places within a couple of city blocks of my home where people still kept horses in pastures.

I used to love just leaning against the worn wooden fence-line and watching those graceful beings trot or gallop, manes and tails flying behind them.

My buddies and I used to bring large sugar cubes with us, and we’d offer them to the horses with arms stretched through the slats of the fence.

What a delight to have those rubbery lips touch your fingers as their large teeth very gently plucked those cubes from our hands! And then, for a brief time, both little humans and large horses would regard each other from opposite sides of the fence, our eyes locked as they pleasantly chewed and swallowed the proffered sugar.

I have been ever sensitive to mistreatment of any animal since, but again this is a connection formed in my childhood that is very rare for children in my country today. Yes, dogs and cats abound, but it is a wholly different matter to encounter animals that remain truly other than we.

Although Chinese President Xi Jinping has emphasized the importance of keeping farming and rural life strong, beautiful, and vibrant, presidents of both parties in the United States — for many decades now — have largely paid only lip service to rural life and have done nothing to slow, let alone stop, the exodus of family farmers from the land.

The Midwest is widely considered by those on the two coasts to essentially be “flyover” country, as if its land, its people, and its way of life are also relatively unimportant.

It does not help that politically the Midwest tends to be conservative, meaning in today’s world Republican, and that they remain so despite what politicians do.

So the votes flow to the statehouses and to Washington and the farm subsidies flow back to the farms, even as more and more of them are increasingly owned by wealthy corporations who, of course, have little true interest in preserving family farms or, judging by their actions, much caring for the land and its resources, either.

How I wish my country were wise enough to have a “beautiful villages” campaign!

Such a focus might well play a vital role in helping us to reconnect with each other in these badly fractured times as more and more of “us” define ourselves by where we live: The growing partisan divide — that pits rural, Southern, and parts of Western America against urban, northern, and coastal America — is dangerous, blinding us to the many things we have in common while encouraging various kinds of assaults on the people and resources of those areas when the “other side” holds power.

I endorse Wang’s concluding lines: “The beauty of a village is ultimately defined by a humble spirit as well as a clean environment — both natural and social — rather than by the size of its GDP.”

The author is a retired US statesman.

Special Reports
﻿
Economic growth must be inclusive for the benefit of all – business and people
Business should care, for everyone's good
How entrepreneurs can sell their ideas to others
Bosnia and Herzegovina's commitment to building further bilateral ties with China
Climate change means years of economic fallout
Skincare, transforming glasses and ice cream as the expo winds up
Changing perceptions of China at home is key to improving healthy trade relations
A scientist who not only sees the wood and the trees, but the light
Is agility the latest management fad?
Is the green lobby's anger just so much hot air?
EXPLORE SHINE