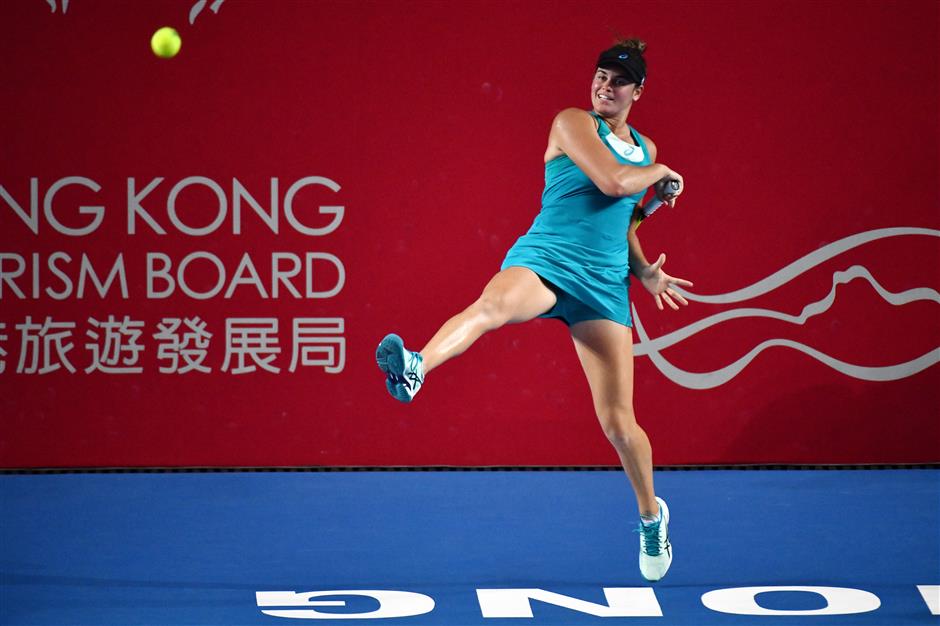 Maria Sharapova overpowered Poland's Magda Linette to enter the quarterfinals of the Tianjin Open on Thursday and is targeting a first title since returning from a 15-month doping ban.

The former world No. 1 prevailed 7-5, 6-3 and will make her first quarterfinals appearance since Stuttgart in April, where she lost to Kristina Mladenovic in the next round.

Sharapova, who was beaten by Simona Halep in the third round of the China Open last week, took a 4-3 lead in the first set before Linette hit back. But Sharapova broke her rival in the 12th game to take a 1-0 lead.

Ranked 15 places below world No. 71 Linette because of her absence from the tour, the 30-year-old Russian appeared in control in the next set despite conceding an early break.

The five-time grand slam champion broke back twice and held on to set up a clash with Swiss qualifier Stefanie Vogele, who beat Yulia Putintseva 6-2, 6-3.

In China's Hong Kong, defending champion Caroline Wozniacki and top seed Elina Svitolina, who have both qualified for the season-ending WTA Finals, withdrew from the Hong Kong Open through injury on Thursday.

Wozniacki pulled out before her match against Lizette Cabrera with elbow pain, giving the Australian teenager a free passage into the quarterfinals.

Svitolina failed to recover from a right leg injury to start her match against world No. 114 American Nicole Gibbs.

"I did everything I could possibly to get ready for today but unfortunately I hurt my elbow during practice and there was no way I could perform my best... unfortunately I have to withdraw from the tournament," Wozniacki said.

Wozniacki, who beat Eugenie Bouchard 6-1, 6-1 in the opening round on Wednesday, and Svitolina have already booked their places in the season-ending WTA Finals in Singapore which take place from October 22-29.

The tournament, which has just two seeds left standing at the last-eight stage, was rocked even before it started by the pullouts of three other big names.

US Open champion Sloane Stephens cried off with an injury after losing in the first round in both Wuhan and Beijing, her only appearances since her Flushing Meadows triumph.

British world No. 10 Johanna Konta also cancelled her trip because of a foot problem, while France's 13th-ranked Mladenovic opted out with a knee injury.

Of the star players that did show up at Victoria Park, No. 2 seed Venus Williams was sent packing in her second-round match in straight sets on Wednesday by Japanese teen sensation Naomi Osaka.

And she was swiftly followed by fourth seed Agnieszka Radwanska of Poland, beaten in three sets by the resurgent former US Open champion Sam Stosur.

In the little action that did take place on court on Thursday, China's eighth seed Zhang Shuai was ousted by American Jennifer Brady 3-6, 4-6, who will face Gibbs in an all-American quarterfinal.

It left Wang Qiang as the sole Chinese representative in the draw after she breezed past Thailand's Luksika Kumkhum 6-4, 6-4.

Wang will face Australia's Stosur for a place in the semifinals and Cabrera, the world No. 155, has an all-Australian last-eight match against Daria Gavrilova, the seventh seed.

The only other seed remaining, No. 6 Anastasia Pavlyuchenkova of Russia, will play Osaka.

Meanwhile, the WTA said that Konta has withdrawn from the Kremlin Cup next week, meaning Caroline Garcia has secured the eighth and last berth at the WTA Finals.

Konta still isn't ready to play after a left foot injury forced her out of the Hong Kong Open this month.

Konta was ranked a career-high fourth in July after reaching the Wimbledon semifinals but the British player has lost her first match at her last five tournaments, sending her slipping to 10th.

Meanwhile, Garcia has won tournaments in Beijing and Wuhan to overtake Konta.

Konta's withdrawal from Moscow makes Garcia the first Frenchwoman since 2006 to qualify directly for the end-of-season finals.