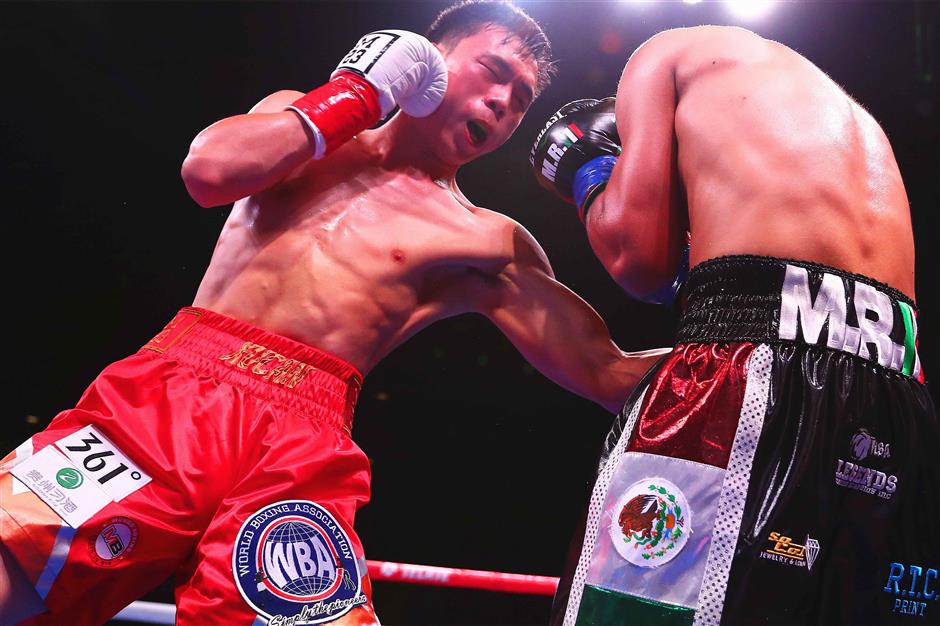 China's Xu Can in action against American Manny Robles III during their WBA featherweight title bout at the Fantasy Springs Resort Casino in Indio, California, on Saturday.

China's only current world champion boxer Xu Can beat Manny Robles III of the United States by unanimous decision in Indio, California, on Saturday, to defend his World Boxing Association featherweight title for the second time.

Xu was aggressive from the start, coming up with a total of 1,562 blows through the 12 rounds compared to his Mexican-American opponent’s 765. Robles was troubled by weariness, especially in the last four rounds, before swallowing his first professional loss, with the judges scoring the bout 120-108, 119-109 and 118-110 in favor of Xu.

Xu said that a three-month thorough preparation in Miami, Florida, was the key to his victory. Stamina and steady defense have been his strengths, having spent more time with his “M23 team” on key training aspects, like footwork and heavy blow, before taking on Robles.

“This is like a self-evolution,” Xu said after the victory. “I always wanted to make a breakthrough and achieve a technical evolution. Tonight, I proved with my performance that the evolution has been completed.”

Xu improved to 18-2 with three knockouts, capping a year that saw him claim the lesser of the WBA's two world titles at featherweight with an upset of Puerto Rico's Jesus Rojas in Houston, Texas, in January — a victory that announced his arrival on the world stage.

The Jiangxi Province native successfully defended the title at the first attempt when he stopped former champion Shun Kubo of Japan in six rounds in Fuzhou, Fujian Province, in May.

The 25-year-old is just the third Chinese boxer in history to have won a world title, after minimumweight Xiong Zhaozhong and flyweight Zou Shiming.

He could find himself in the mix for the more elite version of the crown — the WBA's "super" world title — since the holder of that belt, Leo Santa Cruz, stepped up in weight to claim the vacant WBA super featherweight "super" title with a unanimous decision over Miguel Michoacan in Las Vegas, Nevada, on Saturday.

Xu's fans made their presence felt with Chinese flags and banners at the Fantasy Springs Resort Casino, and their fighter gave them what they came for.

Robles fell to 18-1 with eight wins inside the distance. 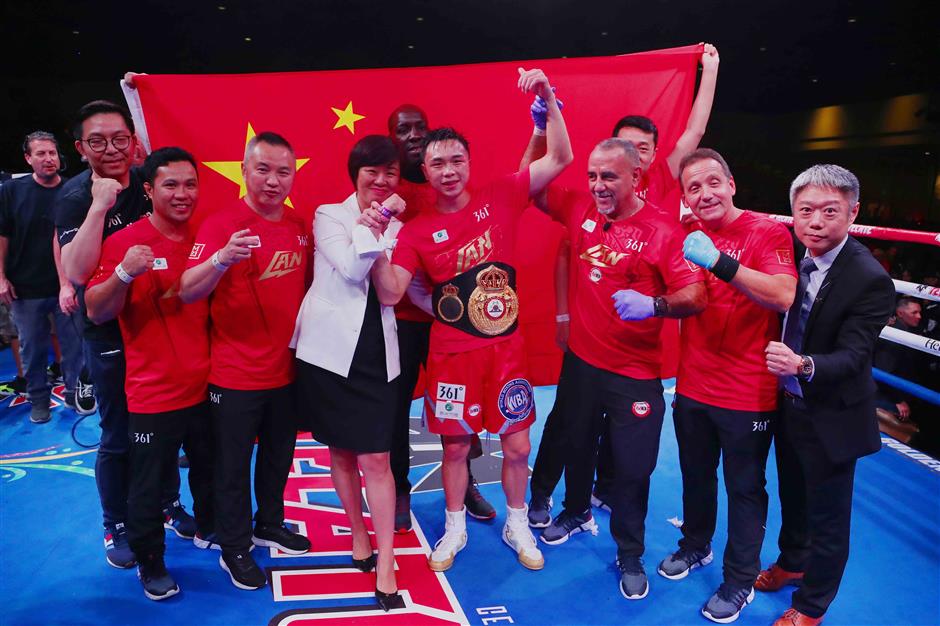 Xu Can poses with his coaching team after the WBA featherweight title victory over Manny Robles III in Indio, California, on Saturday.