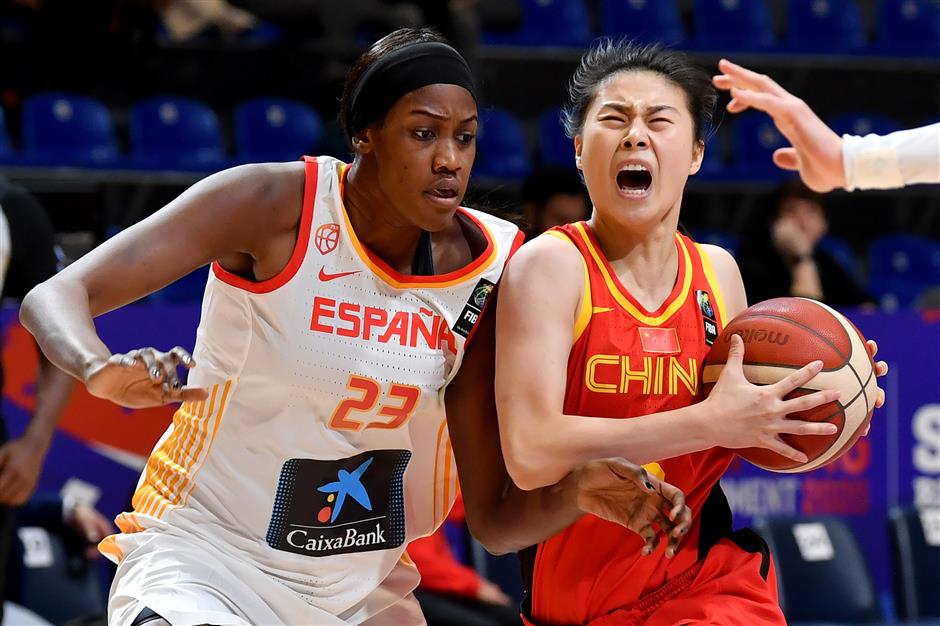 China's Siyu Wang (right) fights for the ball with Spain's Nogaye Lo during the FIBA Women’s Olympic Qualifying Tournament match between Spain and China on February 8, 2020, in Belgrade.

Captain Shao Ting made a brilliant shot plus a free throw at the end of the thrilling game, helping China stun European champion Spain 64-62 in the Olympic women's basketball qualifying tournament on Saturday.

The win guaranteed an Olympic ticket for the Chinese team to Tokyo 2020 as China had beaten Britain here on Thursday in the opening round of the four-team group which also has South Korea.

China coach Xu Limin told Xinhua that he was surprised, and didn't expect such outcome of the game, but had confidence in the team's past three years of hard work.

Analyzing the game, Xu said that it was a very exciting match. "Compared with the previous game on Thursday, despite the shooting percentage wasn't satisfactory, we performed well in defense and rebounding, with nearly 20 rebounds more than the opponents."

He described his feeling as "lucky" for beating one of the best teams in the world, praising their ability to close the 15-point gap in the final quarter.

"Other teams do not have this kind of ability," he admitted.

Xu noted that the game showed the improvement of his team.

Center Li Yueru, who achieved a double-double (13 points and 15 rebounds), was more than modest about her performance. She told Xinhua that the team managed to defeat Spain by being prepared, persistently fighting, and showing to the opponents their own style of play.

"We didn't expect that we could win, we just hoped to bring our best level into play. Although we made mistakes and had a lot of turnovers, I think we performed very well," she said.

Captain Shao Ting, who secured the victory in final seconds and stopped the amazing comeback of the opponents, admitted that her team was looking forward to this match as a learning opportunity and that only as "the game progressed, we found a chance to win this game, and we finally seized it".

"After this game, we are more focused on tomorrow's game and hope to learn from South Korea again and to play at our true level," Shao told Xinhua.

The Spanish team also praised the Chinese team, blaming the defeat on their weak start, catastrophic second quarter, and inability to break the match in the final seconds of the game.

Alba Torres said that her team did not bring the best decisions and had a poor first half, but in the end fought for every ball.

"China played a really good game, they found strength to punish us, and now it's up to us to analyze, and see what we can improve tomorrow," she said.

Spain coach Lucas Mondelo said that his team missed too many easy shots, which made them nervous in the second quarter, which they lost by 6-22.

"China was able to run and to play quicker, fast breaks and this built their confidence. The Chinese team played very hard defense, but had only two fouls in second quarter, which was almost impossible. I want to congratulate the Chinese team for qualifying for the Olympics" he said.

Chinese player Li Meng and coach Xu Limin said at the press conference that the victory came after hard work, and represents a vital experience for the improvement of the team.

"This is only a beginning for our team, not our final goal. The ticket is only a key to open our future," Li said.

Xu repeated that this was "a wonderful" game and a spectacle for all basketball fans.

"You know that we had a lot of difficulties. Originally, we were supposed to be the host in China, but then the venue was changed to Europe. Everybody knows about the novel coronavirus outbreak. So many difficulties we had to overcome in order to play very good today against Spain, in this kind of a hard situation. Thus, the victory is even more valuable to us," he summed up his feelings for international press.

"We still need a lot to improve in the next game (against South Korea), to fix our problems for the future games," he concluded.