Surprises and dreams come true for China's athletics at Tokyo 2020 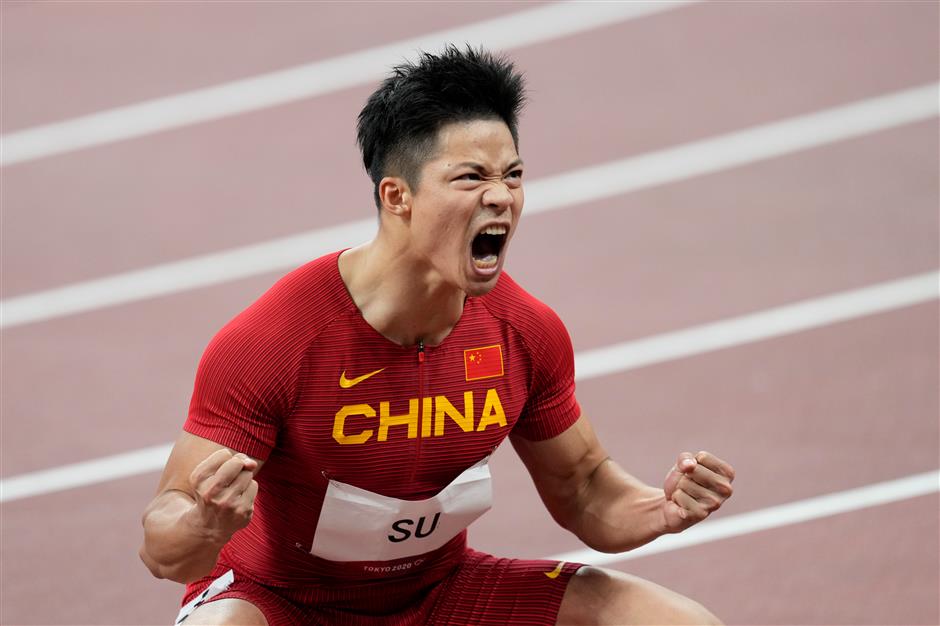 The athletics competition lowered the curtain after 10 days of surprises and dreams came true for China's athletics at Tokyo Olympics on Sunday.

The biggest surprise came from sprint events. China's top sprinter Su Bingtian reached into men's 100m final as he dashed to 9.83 seconds in the semifinal, setting a new Asian record.

The 32-year-old thus became the first Chinese sprinter to qualify for the Olympics men's 100m final, which he ranked sixth in 9.98, the best ever result for an Asian sprinter.

"I was in my best form today. Maybe I couldn't achieve a 9.83 sprint anymore. Today will be the best memory of my life," Su said. "It's all about overcoming myself. When I saw the result of 9.83 seconds, I couldn't believe it."

With his leading, men's 4x100m relay squads just fell short of the podium for the second Olympic Games in a row after Rio 2016, finishing fourth with 37.79 seconds that tied the national record. The women's team achieved the best ranking ever by finishing sixth with 42.71 seconds in their first appearance in the final since Sydney 2000.

As for shot putter Gong Lijiao, Tokyo was the place where her long-waited dream came into reality. Competing in her fourth Olympic Games, Gong Lijiao finally stood on the podium for the first time and on top of it.

"Becoming an Olympic champion was like a dream come true. I have imagined it a million times," said Gong, who set her personal best twice in the final, throwing 20.53 meters in the fifth round and 20.58m in her sixth attempt.

"Before the last throw, I came to realize it could be my last shot at the Olympics because I may retire soon, so I calmed down in a bid to show my best," said the 33-year-old veteran.

Dreams are realized not only for veterans but for young athletes.

Liu only made two successful attempts but her powerful first throw of 66.34 meters was enough to secure her historic victory.

"I feel surprised to win the gold medal, but I think it could be attributed to my good state of mind today," said the 27-year-old after the competition.

Another surprise for Team China is Zhu Yaming, who produced his personal best jump twice to win a silver medal with 17.57 meters in the men's triple jump final, an improvement from the bronze that China won at Rio 2016.

"Young people should have dreams and should try to overcome every obstacle on the journey to pursue the dreams. Fortunately, I succeed," said the first-time Olympian.

For Wang Chunyu, the first Chinese athlete who qualified for the women's 800m final, her Olympic journey was a bitter-sweet experience. The 26-year-old finished fifth and improved her personal best by more than two seconds in women's 800m final.

"Maybe nobody would have believed that I could finish 5th in the Olympics, I have proved my ability. But it remains a great regret for me for failing to make the podium. Maybe it's because I am still not good enough, but I believe I could make up the gap by hard training. I believe I can win, it won't be long," Wang said.

China suffered an upset in women's 20km race walk where world record holder Yang Jiayu and defending champion Liu Hong failed to stop Italian Antonella Palmisano from winning the gold. Yang suffered a penalty toward the end of the race while Liu managed to bring home the bronze medal.

In 10 days of competition, three world records were broken at the Tokyo Olympic Stadium. US runner Sydney McLaughlin finished the women's 400m hurdles in 51.46 seconds, 0.44 seconds faster than the previous world record set by herself.

Coming into the race as the favorite after breaking the 29-year-old world record a month ago, Karsten Warholm of Norway reset his own world record to 45.94 seconds from 46.70.

Meanwhile, Allyson Felix became the most decorated female track and field athlete in Olympic history with 11 medals, after winning gold in the 4x400m relay and bronze in the individual 400m. The 35-year-old American, who has attended five consecutive Olympic Games, has seven gold medals to her name.

One of the most heart-warming moments of the Games came in the men's high jump when Qatar's Mutaz Barshim and Italy's Gianmarco Tamberi - friends and rivals who battled the same career - decided to share the gold.