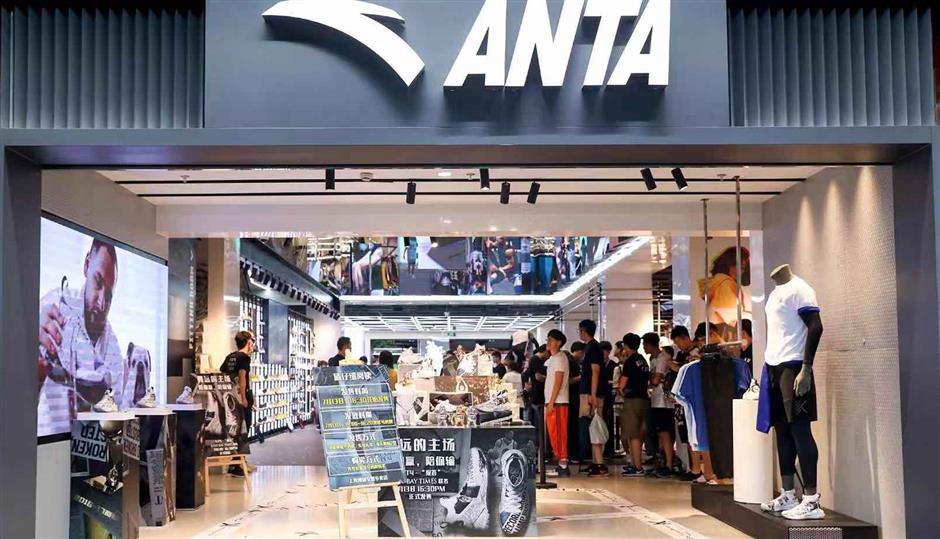 An Anta storefront. The group is to remain focused on its positioning as a sports professional brand for the mass market.

China's largest home-grown sports brand by sales and market value said it expects to post mid to high double-digit retail sales growth for its Anta brand in the first half.

Other Anta Group brands, including Fila and Descente, are estimated to add 50 to 60 percent of retail sales, according to a preliminary stock exchange filing.

Anta recently upgraded its Yuyuan store in Huangpu District, the biggest one in Shanghai at 3,000 square meters, to include self-service check-out and online ordering of goods not available on site.

Liu Chong, vice director of Anta's retail management center, said she hopes the renovated stores will become a trendy spot for customers to exchange ideas about sports as well as fashion, apart from just enhancing sales.

Li Ling, the group’s vice president, said it will stick to its positioning as a sports professional brand for the mass market and will not shift toward premium products because it still wants to embrace the largest consumer base with some of them still price-sensitive for most entry-level offerings.

It will be gradually upgrading physical outlets in other major cities or business circles based on experience from the trial operations of selected physical stores.

According to market research firm Mintel, China's sportswear market is expected to continue to grow and reach 312 billion yuan (US$45 billion) in 2023 with a compound annual growth of 8 percent between 2018 and 2023 thanks to an increasing awareness of healthy lifestyles.

Multinational brands are also betting on the market where spending on sportswear is still behind mature markets.

The Xiamin-headquartered company bought a 58-percent stake in Finland’s Amer Sports in April and the group will seek to strengthen the Finnish company's brand performance in the China market, including Wilson, Arc'teryx, Atomic and Salomon.

The new store formats which hit the market in Nanjing and Chongqing last month have already seen an improvement in foot traffic especially from young customers.

Earlier this year, it also set up three individual business units to focus on running, training and leisure sports after operating the basketball business unit as a standalone for five years.

Anta says its leisure sports or fashion sports category is the fastest-growing as young consumers want to wear sports apparel not just while training but on other occasions as well.