Industries tap Internet of Things for efficiency and cost savings 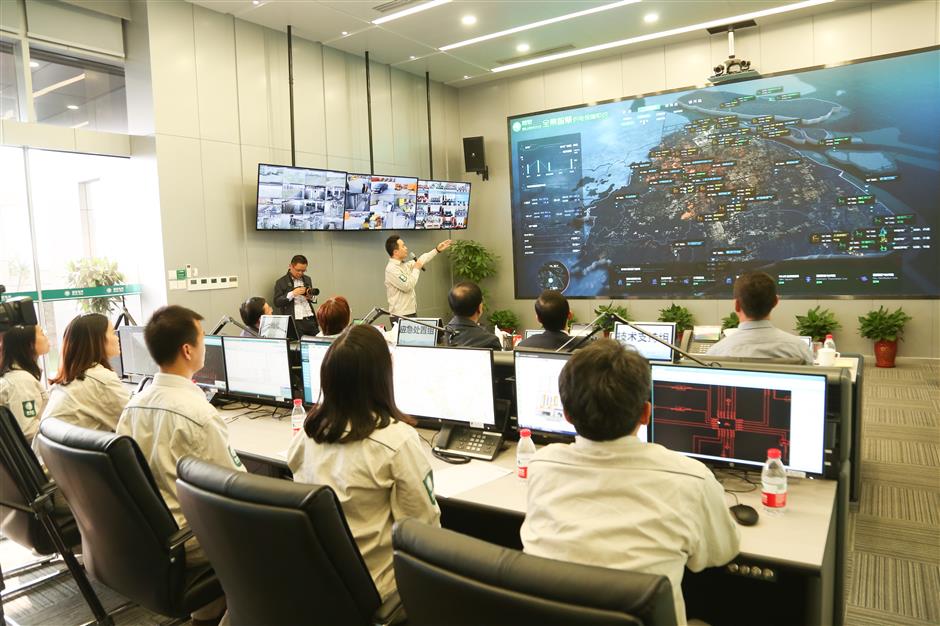 As typhoon Lekima bore down on the coast of the East China Sea earlier this month, the Wind Power Data Center of Shanghai Electric was closely monitoring the storm to determine if wind turbines should be shut down.

Although wind is obviously the driver of the turbines, gales can destabilize the machinery operations.

“We monitor the operation of the wind turbines around the clock,” said an engineer with Shanghai Electric Wind Power Group. “If it becomes necessary, we send a directive to staff on the scene to stop operation.”

The real-time monitoring is a function utilizing the industrial Internet of Things platform created by Shanghai Electric.

Shanghai Mitsubishi Elevator Co, a venture of Shanghai Electric and Japan’s Mitsubishi, also uses the platform to detect faults and even execute repairs.

Nowadays, most advanced industrial companies, including equipment manufacturers like Shanghai Electric, are exploring new ways to use the latest digital technology to upgrade their operations.

General Electric Co and Siemens AG were among the leaders in developing industrial Internet of Things platforms. In 2015, GE introduced Predix, a kind of operations system used to collect and analyze industrial data. In 2016, Siemens launched its version, called MindSphere.

The industrial Internet of Things refers to interconnected sensors, instruments and other devices networked together with industrial applications to collect, exchange and analyze data.

By combining machine-to-machine communications with industrial big data analytics, such platforms are creating new levels of efficiency, productivity and performance.

One impetus to the rapid development of digital platforms is cost-savings. Equipment makers compete on cost, and systems that reduce the cost of operations and maintenance have a clear market advantage.

Some studies suggest that intelligent maintenance systems can reduce overall maintenance costs up to 30 percent and reduce machinery breakdowns by up to 70 percent. Being able to remotely monitor and maintain equipment saves on labor costs.

Industrial Internet of Things platforms have flourished in industries such as power grid management, agriculture, automotive, and oil and gas production

The electric power industry is a particular beneficiary of digital technology.

In an electricity substation in the western Hongqiao business hub of Qingpu District, a large screen in a control room shows real-time data collected from surrounding monitoring equipment, such as intelligent manhole covers. The system safeguards power supply and enhances the capability to respond to emergencies.

The control room was command center for the first China International Import Exhibition held in Shanghai last year, a role it will repeat for the second expo later this year.

That company is planning a citywide expansion. Currently, its Internet of Things platform is under construction covering 95 squares kilometers in the Zhangjiang High-Tech Park in the Pudong New Area. By the end of 2024, State Grid said it plans a nationwide expansion.

“Digital and smart infrastructure generates large amounts of data every day,” said Markus Mildner, executive vice president of Siemens (China) Co. “How to leverage that wealth through new digital products and data analytics is a complex task. To fully release that huge potential is key to sustainable development globally, now and in the future.”

So far, Siemens has set up more than 50 MindSphere centers in different fields around the world. There are six in China, focused on fields such as industrial manufacturing, power generation and traffic control. MindSphere is cooperating with Alibaba Cloud.

“Industrial data are fuel for enterprises,” said He Renlong, deputy chief engineer of the East China Branch of the China Academy of Information and Communication Technology. “China provides about 60-80 percent of world industrial products, so that “solid fuel” potentially reaches 80 percent of the world.”

Cheng Yan, executive director and general manager of Shanghai Electric Development Technology Co, noted, “The industrial Internet of Things acts like a plug that individual companies can use to connect to it and create larger value through data sharing.” Shanghai’s solid industrial base provides a ready testing ground for developing such platforms. According to the Shanghai Municipal Commission of Economy and Information, the industrial Internet of Things is a priority in the campaign to promote industrial upgrading through digital transformation.

Li Qiang, Party secretary of Shanghai, has stressed that “industry is the main battlefront of artificial intelligence, or machine intelligence.” He said it progress must be based on the industrial Internet of Things.