Novartis pledges to continue pushing innovation in China with new treatments and solutions in the cardiovascular sector, one of the most common diseases in China.

Novartis' booth at the 4th CIIE

Novartis is fully engaged in the Chinese market from manufacturing to business development, covering the whole industry value chain.

It has been committed to offering innovative solutions and partnerships that could be valuable in achieving the goals of Healthy China 2030.

The increasing prevalence of cardiovascular disease is a serious burden for patients and their families, and it's also a huge challenge for healthcare provision and health budgets.

According to the Chinese Cardiovascular Association, it's estimated that there were about 330 million cardiovascular disease patients in China in 2019, about a quarter of the population, and it was responsible for 43 percent of deaths that year.

In 2017, the expenditure for CVD management reached 540 billion yuan (US$84.4 billion) and accounted for more than 10 percent of China's total health expenditures.

Novartis has seen the urgent need for effective treatment in the sector and has been rushing to include pipeline development in local trials for quicker local approval.

One of the potential blockbuster drugs "Inclisiran" successfully landed in Hainan Lecheng with the first Chinese patient receiving injection of Inclisiran in Boao Super Hospital on July 1. 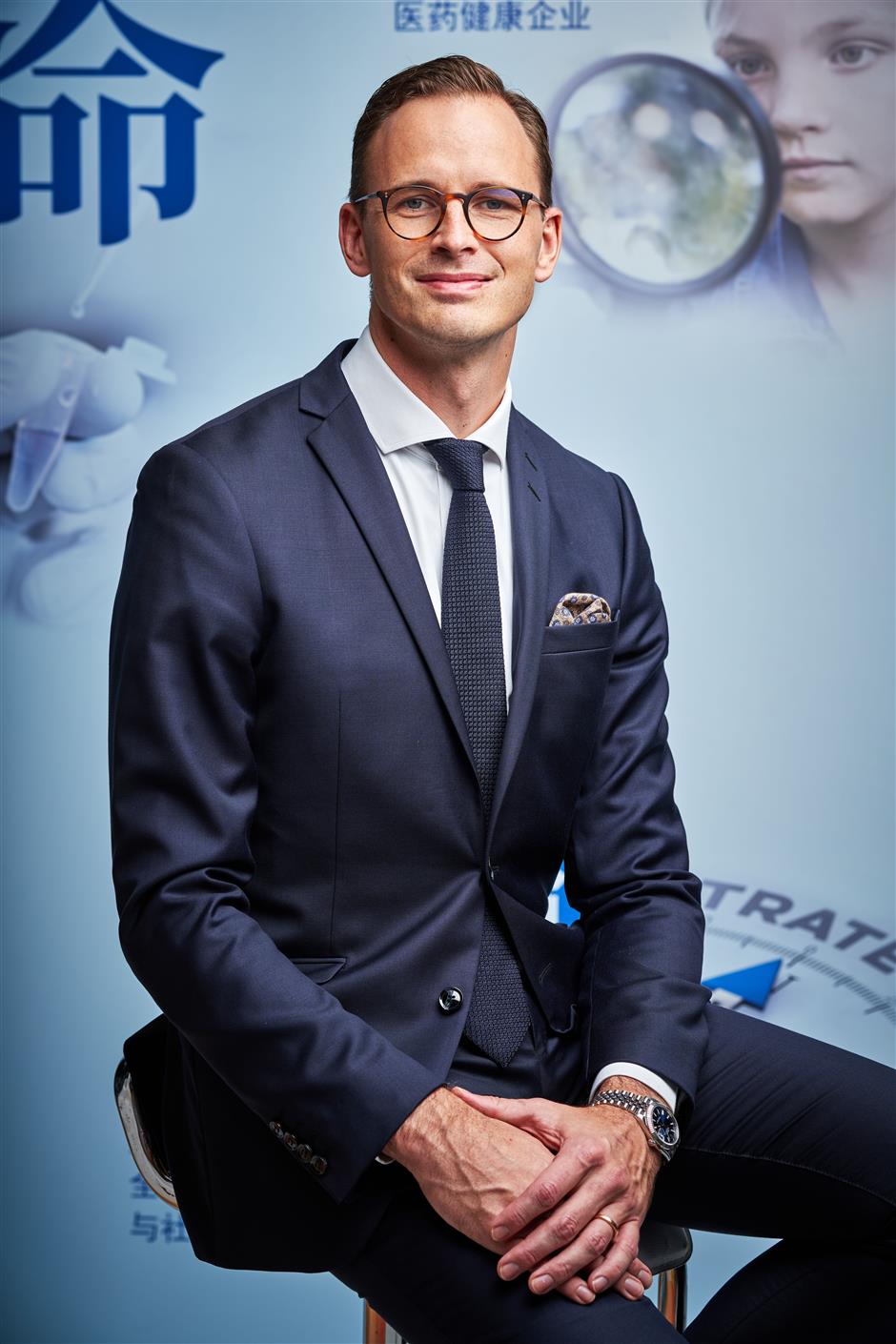 "We're very excited about working closely with the administration to ensure earlier access of our innovative products for more patients," Kahlstroem said in an interview with Shanghai Daily last month.

"I think it's a unique opportunity for us to really bring innovation early to Chinese patients in a way that was unprecedented in the past," he said.

There are over 400 million Chinese with dyslipidemia, yet approximately 80 percent of dyslipidemic patients at high cardiovascular risk still fail to achieve the optimal guideline level of low-density lipoprotein cholesterol (LDL-C).

"We've noticed that cardiovascular disease patients are shorter on therapy in China than other markets, and we believe the new treatment gets to play a very important role because it's only injected twice yearly," he noted.

It has the potential to contribute to the early management of cardiovascular risk factors and the early arrival of the inflection point for cardiovascular events in China for mortality rates to lower significantly.

Inclisiran was approved at the end of last year by the European Commission for the treatment of adults with primary hypercholesterolemia (heterozygous familial and non-familial) or mixed dyslipidemia, and is expected to get approval in the US soon.

It's really well positioned to help address some of the major challenges that China and other countries are grappling with when it comes to managing cardiovascular disease, according to Kahlstroem.

"Our next priority market would certainly be China and since the unmet need is so high and we can have an impact on population levels, we have very high anticipation of how this new treatment will be adopted in China," Kahlstroem added.

He said the company is also prioritizing partnerships with local healthcare ecosystems to understand the needs and to implement the usage of drugs.

Novartis has been working with the China Cardiovascular Association on the "Heart Failure Center" project since the end of 2017 to implement a tiered diagnosis and treatment and two-way referral model. The aim is to achieve standardized heart failure diagnosis and treatment as well as minimize the re-hospitalization rate and mortality of heart failure.

Up till now, the number of registered hospitals exceeded 1,700, of which more than 500 have completed certification as "Heart Failure Centers."

When it comes to new product development, Novartis has made the decision to make sure China would be included in future clinical trials to carry out parallel studies along with overseas markets.

Novartis decided to expand the label of its heart failure drug Entresto to treat hypertension patients in China and Japan.

As a breakthrough product in heart failure treatment for the past two decades, Entresto was given market approval in China in 2017, significantly helping heart failure patients by reducing mortality and the risk of hospitalization. It was included in the National Drug Reimbursement List in 2019 to help further reduce the disease burden.

China was among the first countries to give the drug approval in June this year for hypertension treatment.

Kahlstroem cited that as an example when talking about how it designed local research and development programs to better address unique unmet medical needs locally.

"Thanks to our strong medicine portfolio we can take a strategic decision to stay in the cardiovascular disease area for the long run," he noted.

Novartis has kept a strong momentum in China in recent years and maintained its foothold as one of the leading multinationals in the market. Overall operation sales in China surged 18 percent to US$839 million in the third quarter this year.

"It's important to take a holistic view on how we can collaborate with the system," he said.

On the patient side, it has co-developed with China's Internet giant Tencent to launch the first artificial intelligence-backed disease management platform for heart failure in China called "AI Nurse."

As of September this year, more than 270,000 cardiovascular patients are using "AI Nurse" for daily disease management, 56 percent of whom were heart failure patients.

Other innovative medicines currently being developed by Novartis also focus on the lipid-lowering treatment and it's eyeing for these new treatments to be available in the Chinese market as soon as possible.

In the rare kidney disease area, the Iptacopan is an investigational first-in-class, orally administered factor B inhibitor of the alternative complement pathway.

Through patient-centric solutions and strong research as its backbone, Novartis stays committed to bringing high-quality and innovative products and extensive experience in disease management to China and becoming a leader in the cardiovascular sector for the long run.