It was recently found that although Shanghai has been returning to normal production and life since June, many Christine stores have not yet reopened.

Its store inside the Dalian Road Metro Station, which used to be a popular choice for buying breakfast on people's way to work, is now closed with a small amount of packaged food left on the shelves.

"The store hasn't opened since this round of coronavirus outbreak," according to a local resident surnamed Luo, saying her company gave employees Christine vouchers as corporate benefits, which was the main reason she bought food there.

Several other Christine stores, including one on Aiguo Road in Yangpu District and its flagship store on Jinshajiang Road, have not yet resumed business.

"We have called Christine's customer service but can never seem to get through." 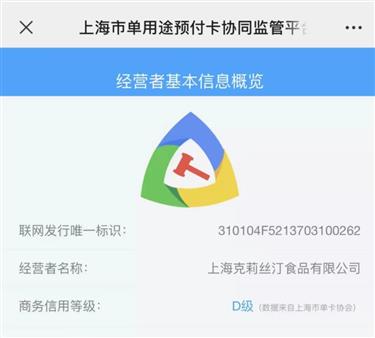 The association supervising single-purpose prepaid cards gave Shanghai Christine Foodstuff a credit rating of D, and included the company on a warning list for its "failure to accurately transmit card issuance information or report operational information."

The credit ratings from A (the best) to E are given by the industry association on the basis of past performance, financial reports and complaints.

Ratings of D and E indicate credit risks with problems such as failing to honor prepaid cards.

A senior manager was quoted by local media reports, saying executives of Christine are trying to find fund to resume businesses of the bakery chain, and it is yet to know how long it needs or how much it can manage to get.

Christine, with a nearly 30-year history, has been going downhill in recent years with a lack of innovation and failing to keep up with the trend of consumption upgrading, analysts say.

According to the annual report of Christine International Holdings listed in Hong Kong, its operating revenues in fiscal 2021 totaled 292 million yuan (US$43.25 million), a slump of 27.7 percent from a year earlier.

Its parent company posted a net loss of 170 million yuan, up 54.14 percent year on year and its ninth annual loss in a row since 2013.