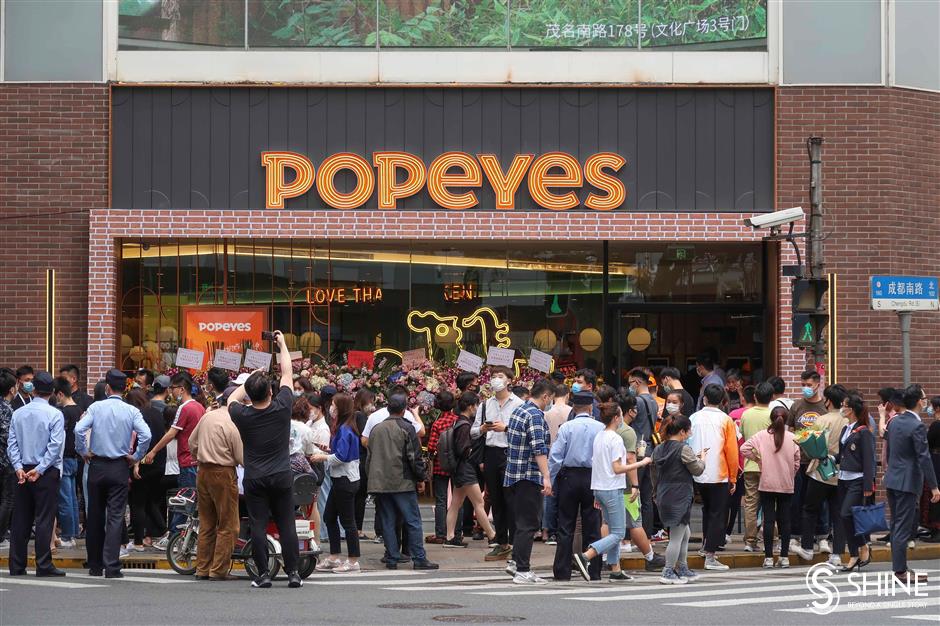 The two outlets are the Popeyes flagship store on Huaihai Road and another at the Shinmay Union Square in the Pudong New Area. The four other stores, however, have closed.

Earlier media reports claimed that the chain's two stores in Zhanghzou, Zhejiang Province, and one in Nanjing, Jiangsu Province, have also stopped operation.

Popeyes China is operated by PLK APAC Pte Ltd, a subsidiary of Restaurant Brands International Inc, and it's not yet clear whether the remaining two stores will stay operational.

The official service hotline of Popeyes could not be reached on Tuesday evening.

A notice outside the Popeyes store at the Xuhui ASE Mall says that the outlet has suspended operation starting from Tuesday.

The fried chicken chain opened its first store on the Chinese mainland in downtown Shanghai two years ago, drawing crowds and long queues.

But soon there were complaints that its fried chicken offerings were less tasty and that sometimes there were long waits to pick up meals even when the store was not crowded.

The company had set an ambitious target of opening 1,500 Popeyes restaurants on the Chinese mainland in the next 10 years.

The company said at its second quarter earnings conference call last week that ramping up development in China is one of the key drivers for Burger King International to get back to pre-pandemic levels of growth.

It added that it has also made capital contribution to fund the business and accelerate growth in the coming years.