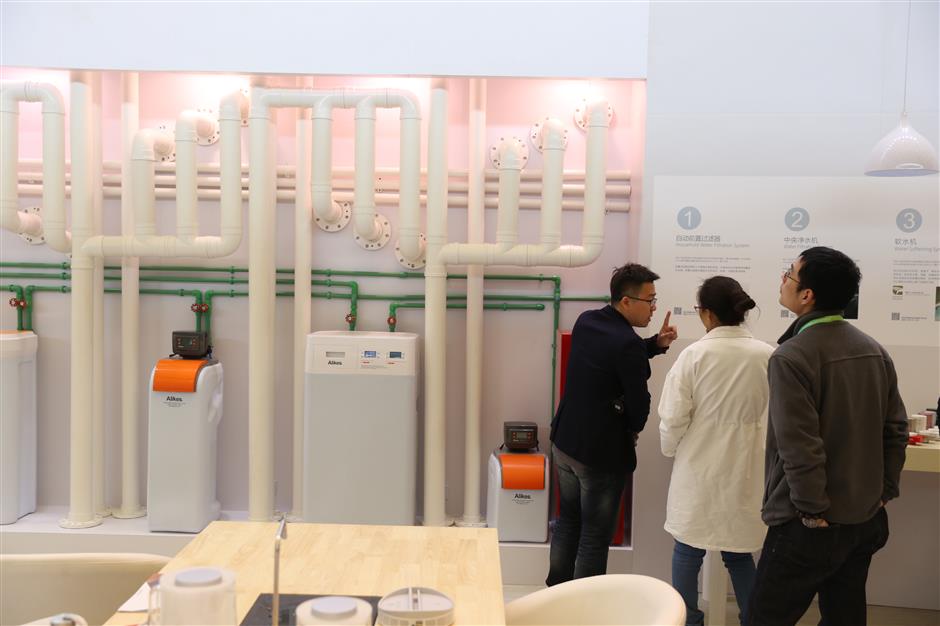 Chinese people's interest in household water purifiers has been growing in recent years. The water purifier market in China is estimated to be worth over 100 billion yuan (US$16 billion) in the next five years.

With Chinese residents’ rising awareness of clean water, global industrial giants are keen to make their mark in the consumer market.

Before that, at its Chinese research center rival General Electric developed a reverse osmosis film, or membrane, to filter water for drinking while Japan-based Mitsubishi projected its water purifier sales in China to quintuple by 2020 from the level in 2016. “The household drinking market here will significantly surpass the growth of the industrial sewage treatment sector,” it said.

Water treatment is increasingly becoming a matter for households with rising awareness of pollutants, bringing opportunities to industrial manufacturers with key technologies.

In the past, brand names were the main factor influencing consumer choice when it came to buying water purifiers.

Nowadays, however, component manufacturers — who “truly decide the quality of the purifiers” — are getting closer to end users to fight for a larger share of the market, said Wang Liping, a veteran in water purifier sales.

Along with launching a new brand name, Dow is attaching a QR code to every product. This can be scanned to determine whether the product is genuine.

The product also applies reverse osmosis technology, “which is the key to decide the quality of water purifiers, also one of the most advanced water purification technologies worldwide,” Wang said.

While previously such technology mainly applied in industrial sewage treatment, “the right time seems to have arrived for us to meet consumers,” he said.

On Zhihu, a Chinese crowd-source Q&A platform, information about reverse osmosis attracted nearly 54,000 page views with domestic users keen to find out which companies produced the best films and purifiers and which brands were using the technology.

An enormous market expected to be worth 1.9 trillion yuan by 2020, water treatment in China has great potential as only 5-10 percent of domestic residents have installed water purifiers, “while abroad the figure is around 90 percent,” Wang said.

The water purifier market in China will be worth over 100 billion yuan (US$16 billion) in the next five years, according to bg.qianzhan.com, a domestic consultancy. It said sales totaled 12.1 billion yuan in 2014, up 66.9 percent from the previous year. That compared to the 0.25 percent average annual sales growth of household appliances at the time, bg.qianzhan.com said.

The reason for the shift is partly because domestic producers lack such technologies.

China has around 400 membrane producers. “But they have only a limited market share, with the domestic market dominated by foreign giants,” reported Shenzhen Gaogong Industry Research Co, a domestic consultancy.

Dow, along with foreign companies that include GE, Japan’s Nitto and Toray, US firm Koch and South Korea’s CSM, “almost earn around 90 percent of the market share,” the consultancy said.

But now, the consumer market has become the “last cake of China’s water treatment industry,” which is growing much faster than the traditional industrial sector, Wang said.

Dow won't reveal sales figures for its water treatment products in China, but said that in the near future the consumer market, rather than the industrial sector, would be the largest bolster of its performance in China, Chan said.

GE, meanwhile, has collaborated with domestic brands such as Xiaomi to use its filtration films, aiming to expand its brand awareness among Chinese residents.

On one hand, China aims to expand the market size of domestic membrane to 230-300 billion yuan by 2020, with the market share of domestic producers increasing around 30 percent, “which would erode foreign brands’ profits.”

On the other hand, the effect of such brands’ promotion to domestic consumers remains to be seen, as in several posts at Zhihu, there were questions about whether water filtered through such films are healthy.

“Being high-quality means being costly,” was one comment. “Producers need to find ways to persuade consumers to buy, instead of merely saying our water is clean.”