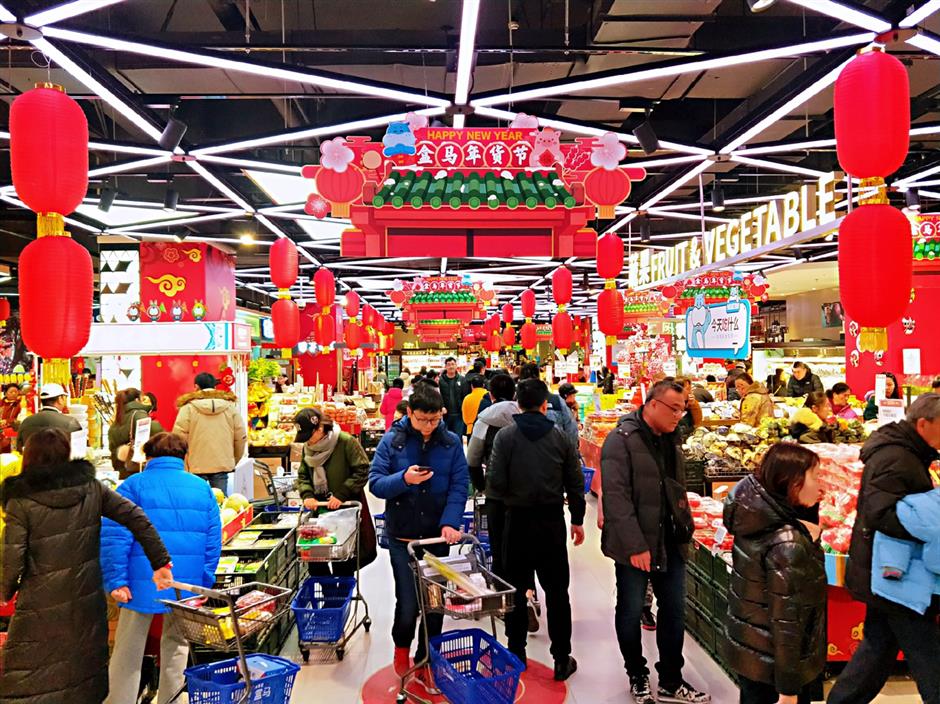 Consumers shop for year-end gifts and pre-packaged meals as well as fresh food at Alibaba's Freshippo.

And it's not just tech-savvy millennials embracing e-commerce for New Year shopping — the number of users over 50 grew 1.7 times from last year, Tmall noted.

Chinese search giant Baidu said its exclusive sponsorship of CCTV’s New Year Gala brought in 20.8 billion digital interactions with Baidu app users on New Year's Eve as TV viewers continue to embrace digital formats for entertainment. A total of 900 million yuan (US$133 million) worth of cash gifts were given out by Baidu during the gala, which attracted the most users in Shandong, Jiangsu and Guangdong provinces.

Sales of pre-cooked or pre-packaged meals ordered online and delivered directly to the home through Tmall climbed more than 16 times from a year ago, and the total transaction amount spent at fresh food market Freshippo also increased 1.8 times in the first three days of the holiday.

Alipay said the number of participants in its annual virtual fortune seeking campaign climbed 40 percent from a year ago to 450 million.

During the first six days of the holiday, 823 million people sent virtual red packages through Tencent's social networking platform WeChat, up 7 percent from a year ago.

Beijing residents sent out and received the most virtual red packets, followed by those in Guangzhou and Chongqing.

The number of tailor-made WeChat red packets were opened for 250 million times and more than 26,000 companies have sent custom-made red packets to employees.

Travelling is also a holiday routine for Chinese consumers, and Alipay data shows Shanghai residents spent the most on their overseas trips during the New Year holiday, followed by Beijing, Guangzhou and Shenzhen.

Consumers on Alibaba's online travel platform also made more trips during the holiday, with outbound trips climbing 28 percent from a year ago, and the total number of travelers for both domestic and overseas trips rising 19 percent.

Alipay also noted that middle-aged travelers, those born between 1960 and 1979, were the main driving force in outbound tourism and overseas consumption.

The 1960 to 1969 age group saw their total user base increase 2.3 times from a year ago, and total consumption of this age group surged 2.5 times, the highest growth rates among all age groups.