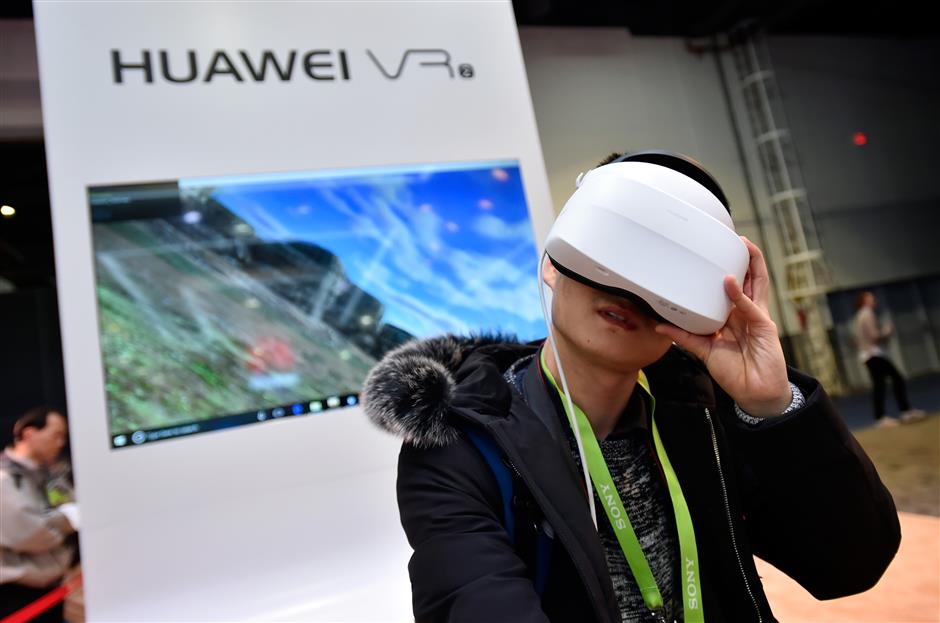 An attendee uses the Huawei VR at the Huawei booth during CES 2018 at the Las Vegas Convention Center on January 9, 2018 in Las Vegas, Nevada.

About 1,500 Chinese tech companies, including industry giants like Baidu and Alibaba as well as startups put their home-grown gadgets on display at the Consumer Electronics Show (CES), which kicked off Tuesday in Las Vegas.

Holding one-third of all booths, Chinese tech companies are holding a dozen press conferences and have thrilled audiences with a keynote speech by Huawei to promote its latest smart phone.

As the workshop of the world, China is not a newcomer to the consumer electronics industry's largest show, but the country's manufacturers are becoming more innovative.

"The driving themes of 2018, including voice computing, artificial intelligence and connectivity make our lives better and more efficient," Shapiro said.

Chinese companies are not only embracing the "new ecosystem," but also building it.

Lu Qi, Baidu's COO, called it "China's speed" in the company's CES debut press release. He pointed at the speed in which the driverless car could make a field test in China after a fleet of vehicles, including two sedans, a Lincoln SUV, and a motor sweeper, paraded at Baidu's headquarters through a live stream at the conference.

Suning Group, one of the largest home appliances retailers in China, opened a self-service store in Las Vegas. The Nanjing-based retailer has already opened five such stores in China while no such store has ever been put into operation in the United States.

This year's star is Byton, an electric car unveiled at CES known as China's Tesla. It is expected to be mass produced and sell at US$45,000, making it a real competitor to Tesla.

The new ecosystem has new players and many Chinese companies seized the opportunity to hit center stage. Iflytek Company is one of them.

The company that specializes in AI translation made its debut at CES and showed its real-time English-to-Chinese translation. It ran as good as a human translator.

"In past 18 years, about 160 million terminal devices uses iflytek's technology," said Liu Qingfeng, the company's president. "Over 100 companies globally want to be partners with us." China's startups have also found their niches. Horizon, a Beijing-based AI chip maker, is tapping the lucrative AI market with low-cost AI chips, tailored for specific purposes.

"The pure computing ability of our chips is no comparison to those made by NVIDIA or Intel, but the power consumption of our chips is rather low," said Zhou Feng, the company's chief designer. "That's our targeted market, and it's big, especially in the building of smart cities."

Chinese innovation practices also attracted attention at the CES. A forum to introduce how China's manufacturers and retailers innovate and set the trend will be held during the show.