Rivals position themselves to challenge WeChat 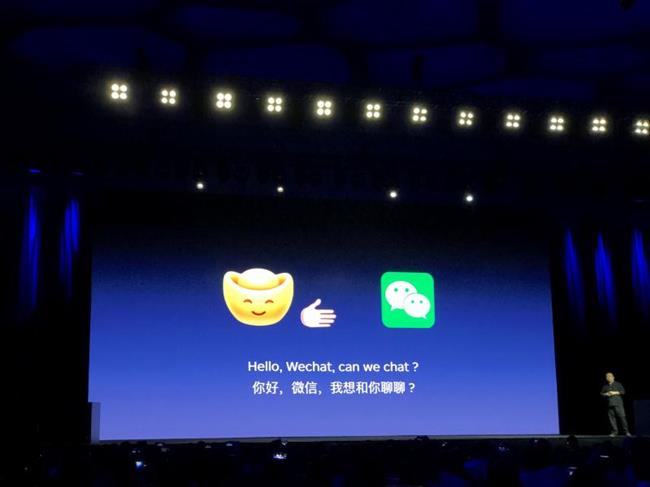 Luo Yonghao, who has developed a new messaging tool rivaling WeChat, received no reply, only the cold shoulder from the acknowledged top dog of China’s social media platforms.

A former English teacher and online celebrity, Luo is a major investor in Liaotianbao, which translates as Chatbox. His new tool was one of three WeChat “killers” unveiled last week.

But can the killers really deal a serious blow to the nation’s most popular social media site? That remains to be seen.

WeChat in the years since it was released in 2011 has become a must-have application in China, with about 1 billion active daily users. It features functions similar to both Facebook and Instagram.

The new players are seeking to exploit potential gaps in WeChat services. Shanghai Daily has learned that Liaotianbao is offering coupons and money incentives; Duoshan is promising video and Snapchat-like features; and Matong will deliver anonymous social services.

Still, even WeChat’s closest rival ByteDance, whose Douyin application has 250 million active users now, has acknowledged that it will be hard to unseat the industry leader from its dominant position in a short period.

“We are targeting different user groups,” Chen Lin, chief executive of ByteDance, said at the Beijing launch of the new product.

“WeChat has a complete eco-system and infrastructure, while Duoshan serves a more limited, targeted audience,” he said.

No one can dispute the value and size of social networking tools in China. Many people spend several hours a day on WeChat and Douyin applications, which creates huge traffic volumes and advertising income.

WeChat has banned links to the three new social platforms on its service. Previously, Douyin’s links were also blocked in accordance with policies to “protect user privacy and content compliance.”

In a WeChat comment, he doubts the new tools will be used by “family members and friends” and he is opposed to anonymous social tools with “negative energy.”

ByteDance, which owns Toutiao and Douyin (TikTok), released its new social platform tool Duoshan on January 15. It was regarded by industry insiders as upgraded competition with WeChat.

“This is a year of both recording and sharing,” said Douyin President Zhang Nan, referring to Duoshan’s combination of short-term videos and social features.

The videos disappear after 72 hours, like Snapchat. Duoshan’s casual and customized contact and video communications can represent personal feelings like “I love you” or “I miss you,” said Xu Luran, Duoshan’s product manager.

Xu was born in 1993 and most of her work colleagues are also from the post-1990 generation, according to ByteDance.

Duoshan is now available on Android and will be on Apple’s App store later.

The new release is the latest shot across the bow in the competition between dot-com giants Tencent and ByteDance.

ByteDance’s killer application Douyin has a daily active user base of 250 million, compared with 30 million a year ago, according to Zhang.

Tencent’s recent major update of WeChat, with improved video stream functions, was seen as a counter-offensive against Douyin.

Luo is founder and CEO of smartphone brand Smartisan, which he developed after becoming a popular English teacher online in China. Smartisan is a major investor in Kuairu, the developer of Liaotianbao.

During another event held in Beijing last week, Luo announced tie-ups with industry giants such as China Mobile, Ctrip and Alipay. They will offer coupons and money bonuses for people who invite others to install the application.

In the lead up to the Chinese New Year on February 5, gifts and money valued at more than 100 million yuan (US$14.7 million) will be sent to Liaotianbao’s users, said Luo.

Within 24 hours after its release on January 15, more than 1 million new users activated Liaotianbao on their smartphones, Kuairu said.

Liaotianbao is an updated version of Bullet Messenger, a once-popular social tool, whose major developers come from Smartisian.

Bullet Messenger, once touted as a “WeChat killer,” accrued more than 4 million active users in the nine days following its debut in August 2018. It has become the most downloaded social app in the Chinese iOS store since then.

Luo said he was a bit angry when his new app was blocked by WeChat.

“We wanted to say hello to WeChat, but obviously they weren’t interested,” he said.

Also on January 15, Matong was released by startup Ringo.AI in Shenzhen, which was also quickly blocked on WeChat.

Wang Xin, the developer of the anonymous social application, is known as “the king of video streaming.” He has maintained that reputation even after regulators cracked down on his Kuaibo application for disseminating pornographic content.

The risk of anonymous social media is obvious. It’s easy for nude pictures, business secrets and malicious rumors to appear on a site where no names are required.