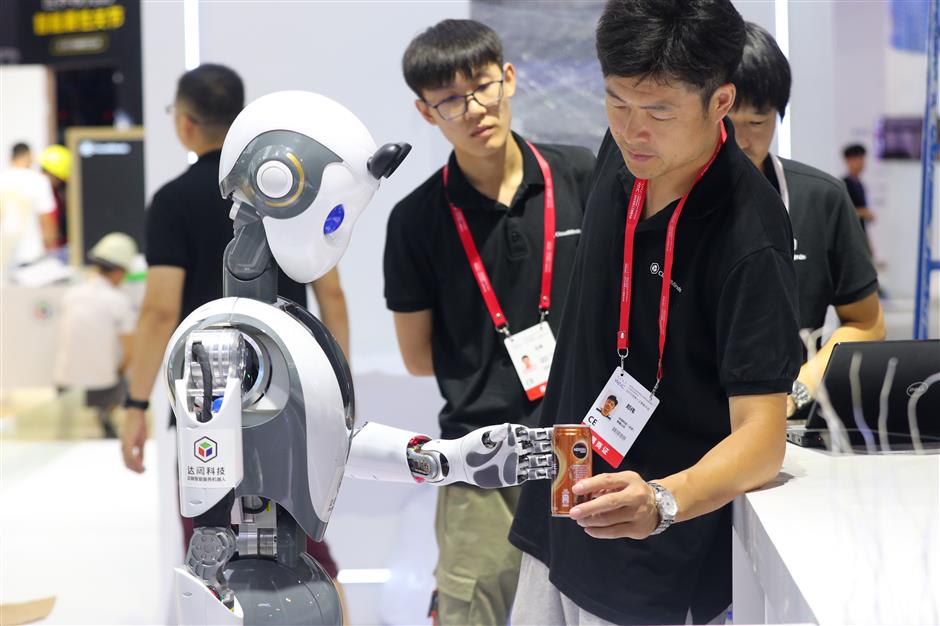 An exhibitor at the World Artificial Intelligence Conference is demonstrating how a robot can interact with a real human being.

Nobel laureates, researchers, IT scientists and leaders of dot-com giants are attending China’s top AI event which will open in Shanghai on Thursday.

More than 300 speakers, half of them from overseas, will talk about AI trends and technological development during the World Artificial Intelligence Conference 2019. More than 300 exhibitors will showcase the latest technologies covering artificial intelligence chips, 5G, smart driving, smart cities and the Internet of Things.

With the theme "Intelligent Connectivity, Infinite Possibilities,” the conference will be held in the Pudong New Area and Xuhui District from Thursday to Saturday.

Alibaba Group Co-founder and Executive Chair Jack Ma and Tesla Inc's CEO Elon Musk will have a conversation at the opening of the conference.

Other business executives include Tencent’s Chairman Pony Ma, Chen Wei from Didi Chuxing and Lee Kaifu, chairman and chief executive of Sinovation Ventures, who has previously worked for Microsoft, Apple and Google.

Exhibitors at last year's conference who are at the event this year include Microsoft, Amazon, BAT (referring to Baidu, Alibaba and Tencent) and Huawei. New exhibitors this year include Tesla, IBM, ABB, Fanuc, PingAn Group and State Grid.

An exhibition highlight will be a “Chip Wall” showcasing 10 AI chips from seven companies. They include Huawei’s Kirin 810, Qualcomm’s Snapdragon 855 and Unisoc's Tiger T710.

Fifteen firms will hold sub-forums and 33 AI-related investment projects will be announced during the event.

More than 200,000 visitors, including 70,000 professionals, will attend the event. They will have AI experience covering self-driving cars, smart hotels, retail stores and VR/AR technologies.

AI-featured doctors, factories and a future concert will also be held during WAIC 2019.

The conference reinforces Shanghai’s leading role in new technology amid plans to turn the city into an AI global hub of the future. New policies, investments and business opportunities will be announced at the event.

“Artificial intelligence has become a core driving force for the new round of industrial transformation and is exerting a profound impact on the world’s economy, social progress and human life,” said Wu Jincheng, chairman of the Shanghai Commission of Economy and Information Development.