The Global Search for Education: Producer and Creator of Apples and Oranges Discuss Teaching Acceptance in a Polarized World 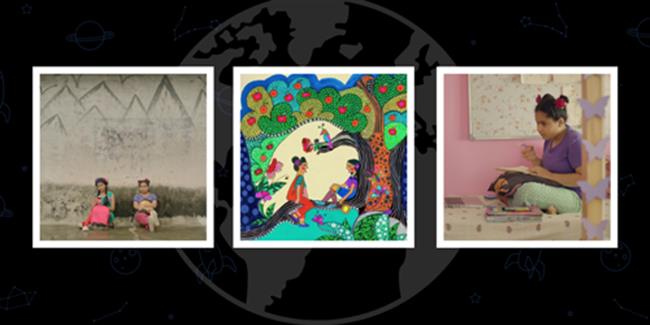 This month audiences can screen Apples and Oranges on the Planet Classroom Network YouTube Channel. The film won the National Award in India for the Best Educational Film this year.

In the fantastical country of Fruitistan, the people are divided – not so different from the world we live in. In this land, there are people who eat apples and others who eat oranges, and they don't get along. Tulip and Daisy become friends but their friendship soon turns sour when they discover that one of them is an 'Appler' and the other an 'Orangee'. Can their friendship survive?

Rukshana, what was the main inspiration for Apples and Oranges?

The growing communal intolerance and the increase in hate crimes in my country, India, were depressing me. And I was asking myself why can't we be more tolerant of others and respect each other's choices and opinions. I started venting my grief and anger on the social media platforms where I spent considerable time arguing with friends and strangers. And what made it worse was the amount of fake news that was getting shared widely on these platforms that was making people react. I realized I was becoming an intolerant person myself.

I started reading about how the social media platforms study user behavior and can manipulate the way we think by pushing the type of narrative they want that causes extreme polarization. I also realized how most of us didn't have any idea about the way these platforms function and use our data. And this is when I tried to change the ways I used social media myself . I started to do more research every time I came across any news that tickled my mind to form an immediate opinion. Instead of reacting, my approach towards any news became more of understanding the issue from multiple perspectives with an open mind.

In 2018, LXL Ideas got in touch with me to make a film on overcoming differences for children. The process of writing this film became a wonderful tool for me to seek the answers I was looking for. I decided to set up the story in a fantastical land called 'Fruitistan' because the problem we were addressing was of universal nature and I didn't want to limit its reach. And I chose to use 'food' as the major component of the narrative because every time someone got lynched in my country because of their 'choice of food,' the world stopped making sense to me.

Sultan, what do you personally like most about Apples and Oranges?

I love the simplicity with which a very complicated and relevant subject has been dealt with. We live in a world which is fragmented into too many different segments based on religion, color, ethnicity, language and many others. The reality however is that deep within we are all human and we all have the same aspirations, desires and needs. The film brings out this universal truth in a very endearing manner.

What would you say is the film's main lesson?

It is said that after technology, the biggest change maker in the world is migration; people are moving and settling in far away places like they never did in the history of mankind. This fact brings with it a challenge of understanding people from different backgrounds and learning to live with them. One of the biggest needs of education today is for children to learn to co-exist.

We have conflicts everywhere in the world. Is this story universal?

We made this film for children from all over the world and we would like this lesson to reach far and wide. People are being differentiated and ostracized for various reasons. Apples and Oranges as a film tries to bring out a very strong message, and that is if we look closer, all of us as humans are the same, and once we realise this we tend to look at the others with empathy. It is the lack of empathy and love that leads to conflict in the Middle East or anywhere else in the world. We need to teach empathy to children and our societies and this film does that in a very beautiful manner.

Rukshanna, your thoughts on this?

If we humans start identifying ourselves as 'living beings' who are here to share this beautiful planet Earth we will be able to co-exist peacefully, not only with other human beings but also with all the other species. But often it is our ego that makes us believe we are superior to others, and that is when we get on the mad power hungry mode and we want to dominate others instead of wanting to co-exist. I believe Mother Earth is the epitome of abundance and every human being deserves to live with dignity and enjoy his or her freedom. If each one of us follow the principles of non-violence and acceptance, we will be able to live and let others live. Prosperity will come to this planet only when we learn to share the resources, gracefully keeping aside our greed. History tells us war has never solved any problems but it has only brought grief and misery for generations.

Final question. Tell us one thing that surprised you most during the making of your film – a lesson to the filmmaker?

What surprised me most during the making of the film is a profound 'realisation'. We often look at others and judge them on various parameters but fail to apply the same principles that we preach about. So while working on this film, I learned to look at my own behaviour and became more aware of the way I was handling differences of opinions with my team during the making of this film.

Filmmaking is a really challenging art form since we often deal with a lot of creative minds. And the wisdom lies in respecting each other's opinions and learning to live with our differences and do what is best for the film. And this is exactly what the film was also trying to tell. So in the course of making the film, I shared my own observances and experiences with my team as well, and we decided to be very conscious of our behaviour and understand how we were dealing with differences.

﻿
Special Reports
﻿
61815
,
The Global Search for Education: Producer and Creator of Apples and Oranges Discuss Teaching Acceptance in a Polarized World
Kids' lab exposes children to chemistry's important role
News reading helps to motivate kids to be a good global citizen
Both excitement and challenges lying ahead
Special ed students communicate through art
It's vital to teach kids wellbeing early on
The young 'chicks' who have no time to kill
STEAM education to build a future for children
Why families keep choosing YCIS Shanghai
The Global Search for Education: National Youth Poets Respond to a World Facing Unprecedented Challenges
EXPLORE SHINE