The tie that binds: cultural heritage that defines who we are 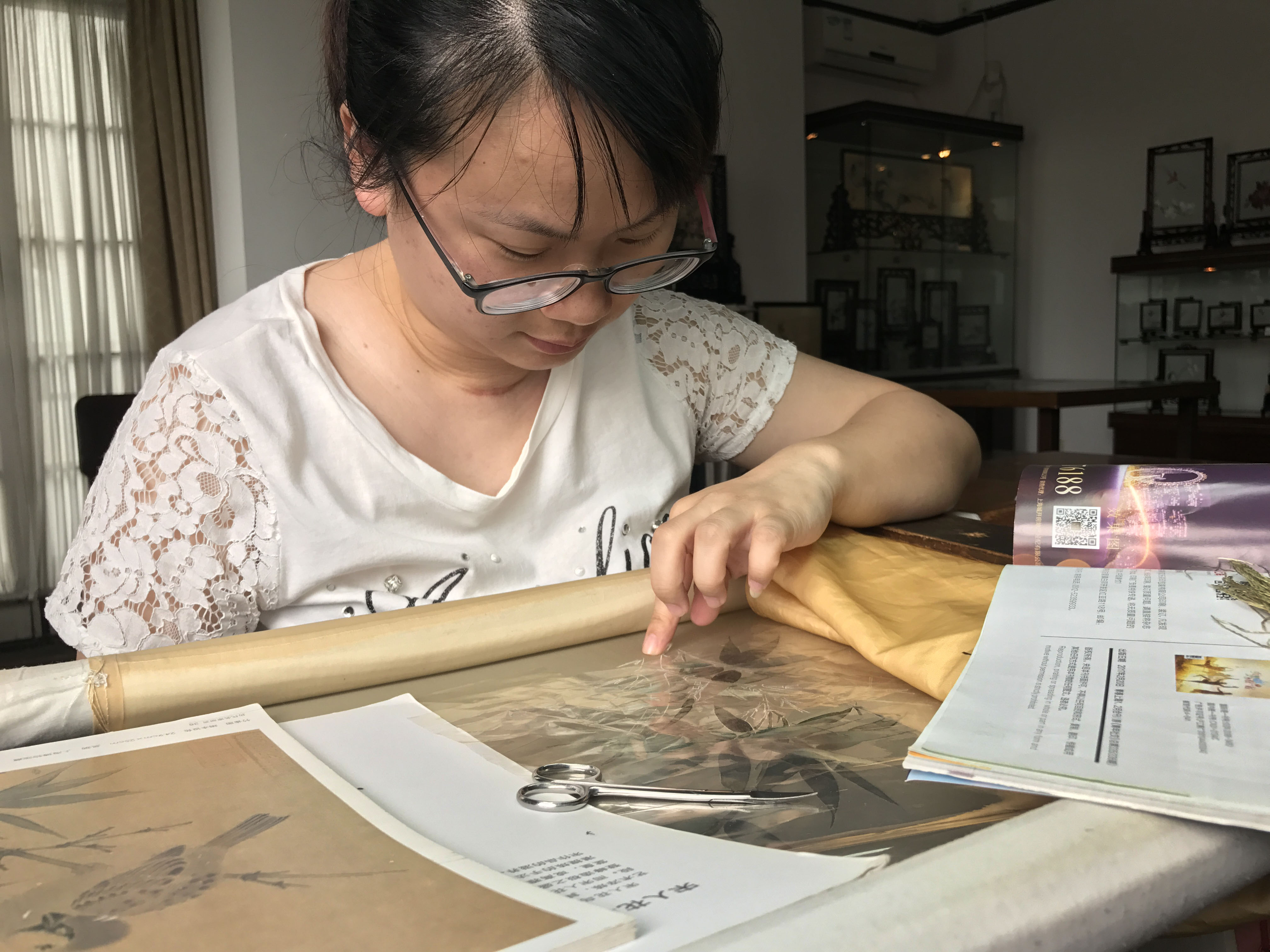 A craftswoman works on a piece of Gu embroidery. The art form originated in Songjiang District.

Shanghai may give the impression of endless glass, steel and concrete, but there is a softer side to the city that embraces the traditions that bind generations together.

On the Chinese Intangible Cultural Heritage Day on June 10, the city proudly hosted an array of splendid folk arts. The main venue was the Great World Entertainment Center, a former fun house of the 1920s and 1930s that reopened in March after a radical makeover.

But that’s not the only place where observances were staged. The Shanghai Museum of Arts and Crafts opened its work studios to visitors, with skilled craftsmen showing how they turn scraps of paper, heaps of rocks or piles of dough into gorgeous artworks.

“Shanghai has spared no effort in rediscovering and preserving its intangible culture over the past 12 years,” says Wang Wei, deputy director of the Shanghai Municipal Administration of Culture, Radio, Film and TV.

“Intangible cultural heritage” is an all-encompassing term coined by UNESCO. It refers to language, performing arts, rituals and festivals, and traditional craftsmanship that define particular communities or groups of people.

It is in contrast to tangible heritage, like ancient structures, archeological sites, coral reefs, rainforests and other physical entities that also form part of history and culture.

Last year, Shanghai adopted a law on protection of intangible cultural heritage, providing legal support for preservation efforts. A regular meeting of 15 municipal government departments and 87 experts from different fields is held to offer guidance on how to protect cultural heritage. 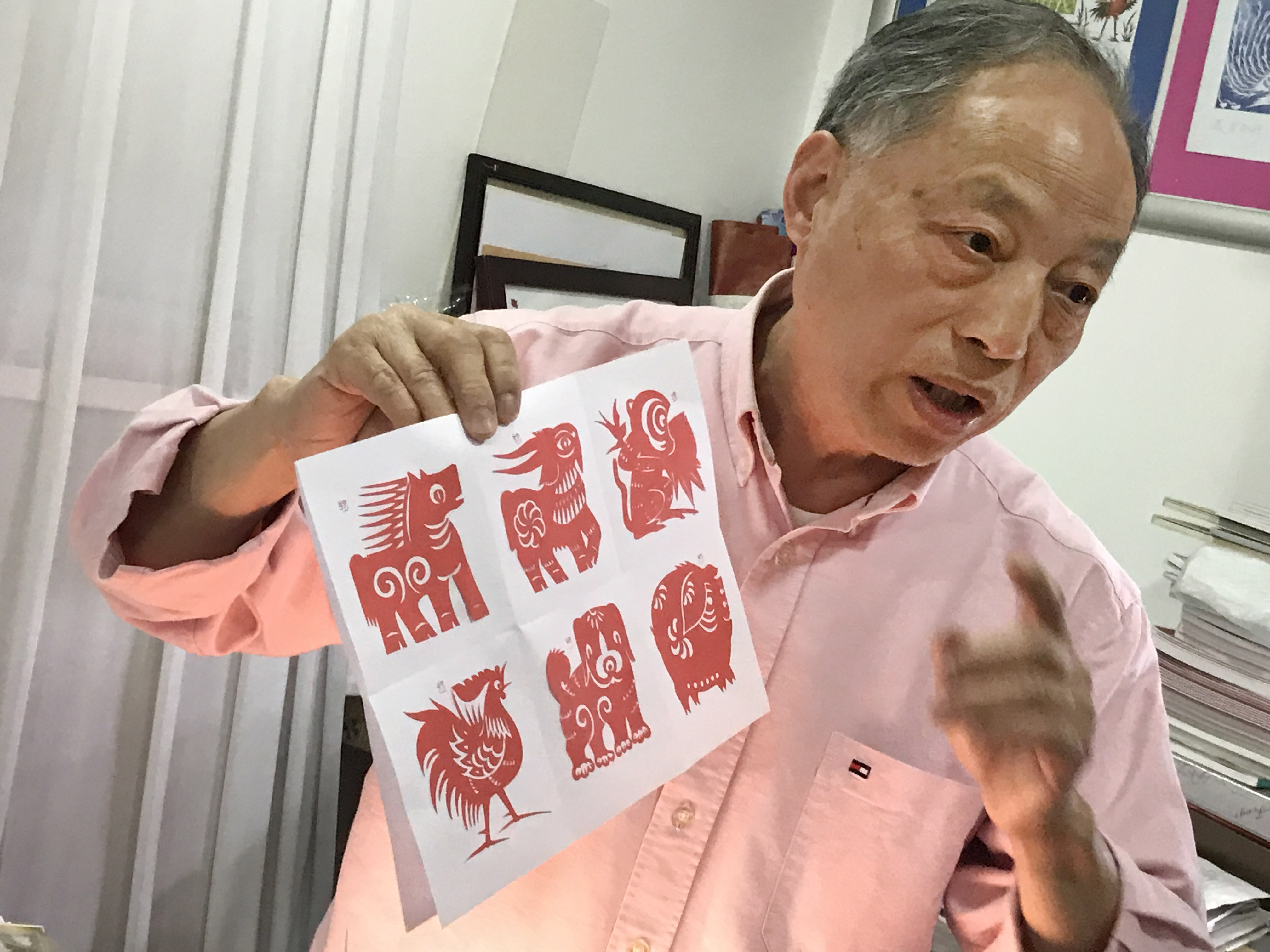 The Shanghai Intangible Cultural Heritage Center has been established, with branches in each of the local district to promote the campaign and provide financial support.

In the past five years, a special fund has dispersed more than 38 million yuan (US$5.6 million) to 245 projects and 188 people who are considered “heirs” of particular folk arts.

So far, Shanghai has given cultural heritage listing to 55 national, 220 municipal and more than 400 district-level art projects and more than 1,400 “heirs.”

“We are also tapping every possible means to record our cultural heritage,” Wang says.

In the modern age, a database of more than 62,000 digital items has logged hand-written documents, music scores, photos, radio cassettes, video clips and compact discs. They are available on www.ichshanghai.cn.

“An urgent task is the promotion of traditional culture among young people,” Wang says. “We want them to become interested enough to carry forward the traditions of their forebears.”

Since 2013, cultural heritage studies have been introduced in Shanghai schools, involving more than 400,000 students. Education materials include animated films and cartoon books. 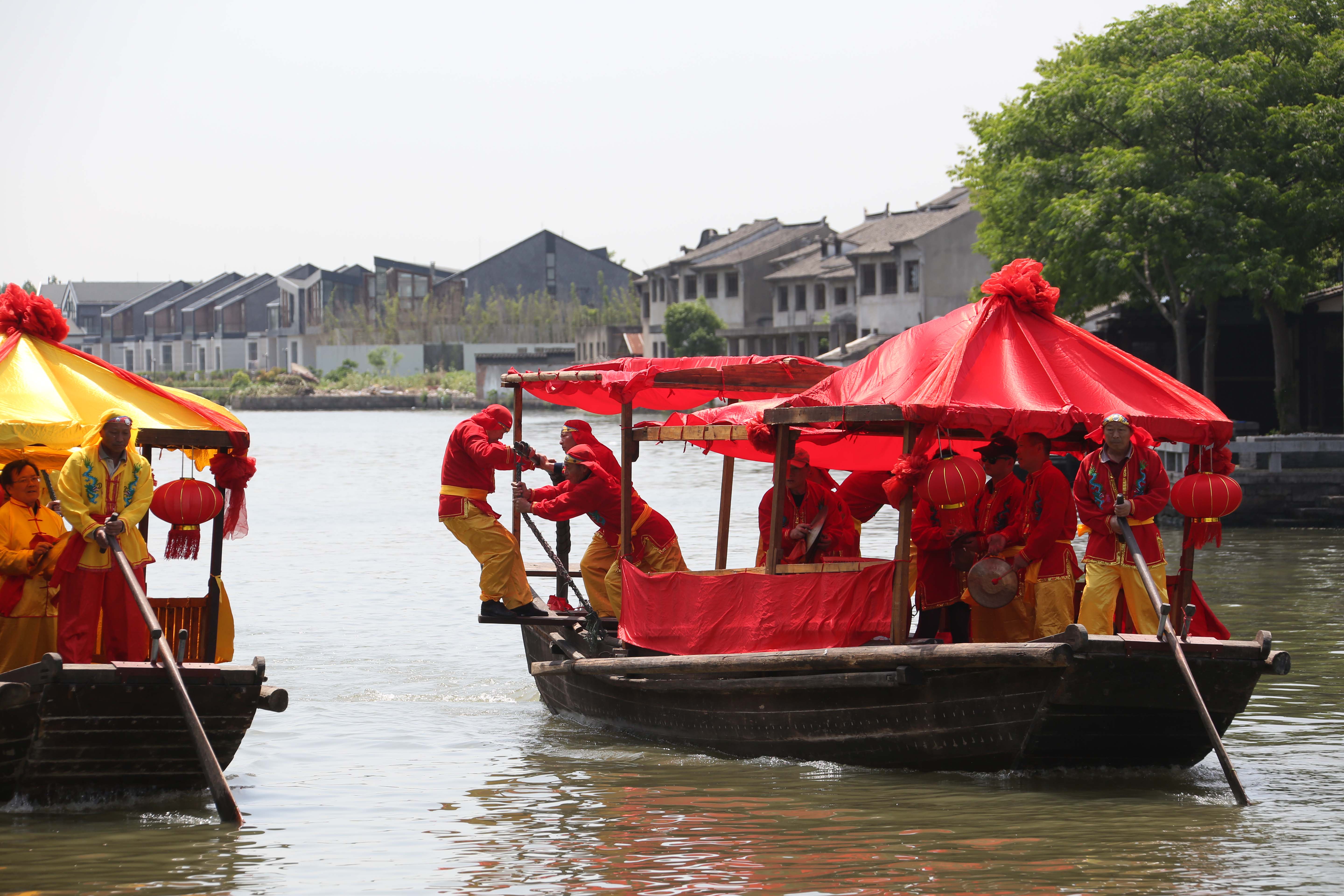 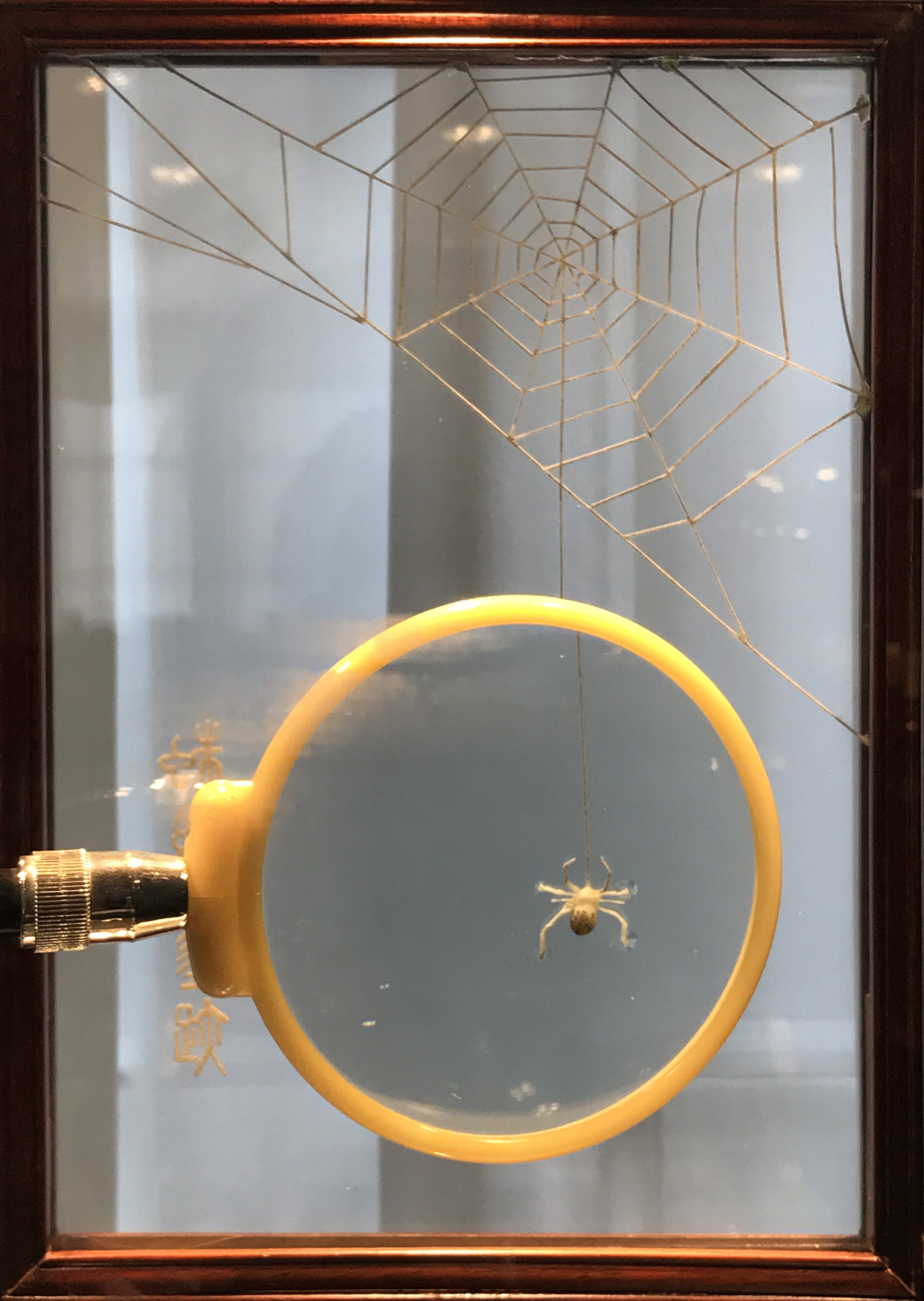 Zhang Yonglian, 80, an heir in the art of farm songs, teaches students in the Qingpu District some of the songs senior farmers sang while they toiled in the fields. The lyrics are in the Qingpu dialect.

“Many local children don’t know how to speak the dialect,” the old man says. “So when they started to learn the songs, they were very interested by the weird pronunciations of the words. They came to love them.”

But most students lose interest by the time they enter the middle school, where academic pressure is greater.

“At least they can hum some of the simple tunes of farmers,” Zhang says. “For me, that’s enough.”

The Shanghai government wants to be more proactive in stirring young passions.

“The next step is to develop the commercial value of these folk arts to make them more sustainable,” Wang says.

A series of cultural products have already been marketed, such as China’s top 10 teas, Shanghai traditional dumplings and Jinshan peasant paintings.

Sung in the local dialect to quick tempos, these songs have been raising the spirits of farmers tilling the soil for centuries.

“My father taught me how to sing them,” says Zhang Yonglian, 80, who is considered a master in the old art. “We had no music scores. It was all spontaneous and improvised.”

The songs revolved around three tones, which are normally sung by farmers taking a break, working in rice paddies or feeding poultry. The free-ranging lyrics can be about flowers, or the 12 animals of the Chinese zodiac, or favorite myths or even anecdotes about daily life.

“Whenever work in the fields was tiring, someone would break into song and everyone joined in,” Zhang says. “The songfest invigorated everyone.”

Urbanization has bulldozed over much of Shanghai’s farmland, and agriculture itself has become more mechanized. The old tradition of singing in the fields has largely been forgotten.

“It’s really a hard tradition to carry forward because no one is singing anymore,” says Yang Xiaofeng, 53, who studied under Zhang and has been singing the songs for about 12 years.

Yang says he wants to preserve the old folk songs. He has been writing down lyrics and notes, and filming videos of performances. So far, more than 80 songs have been preserved. With the support of the local government, Zhang and Yang have been teaching the songs to third-graders. 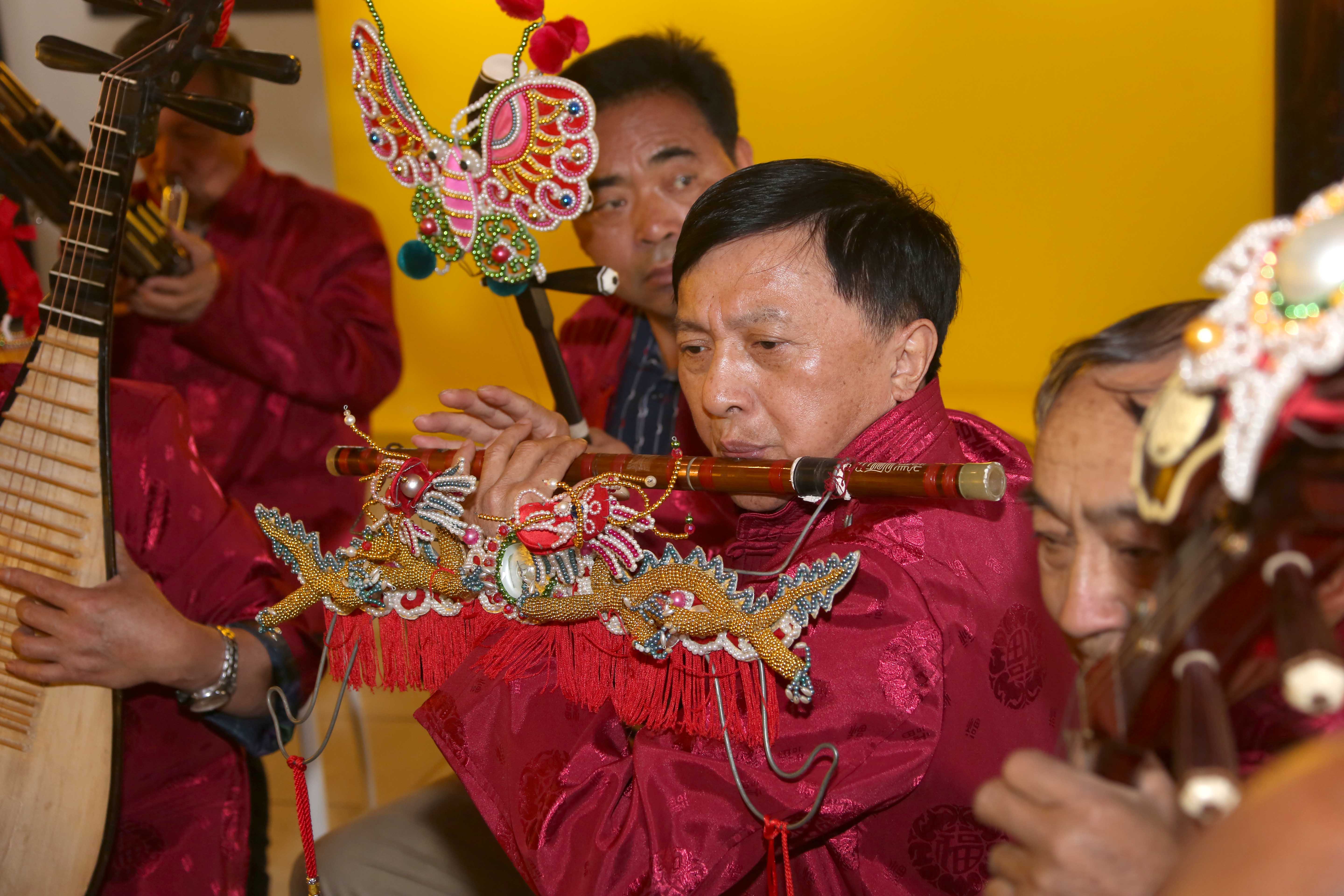 Traditional folk music has been catching on with the grassroots countryside in some Shanghai suburbs.

Musical ensemble of flutes, the two-stringed erhu, the plucked-string pipa (lute), dulcimers and other traditional instruments are becoming more popular. Players usually dress in bright red, a color that symbolizes happiness in China.

“We’re kind of the pop stars of our town,” says Xia Lianxing, 60, who lives in Zhujiajiao watertown and has been playing the flute for three decades. “Our performance schedule is always packed full.”

Xia’s ensemble has played at various countryside functions, including weddings, birthday celebrations, festivals and opening ceremonies. The ranks of players are drawn from farmers, retired teachers and other walks of life, ranging in age from 45 to 75.

The musical performances take many forms, from the cheerful tones of “Yun Qing” often played while seated at weddings to the march-like rhythm of “Xing Jie” when players are walking down a street.

“Young people have little time to practice,” Xia says. “But we will be happy if they want to join us.”