Amid the noise and hurly-burly of urban Shanghai, Buddhist chants in melodious rising and falling tones waft from the Jade Buddha Temple out onto surrounding streets.

“The music calms people and offers a soothing, peaceful world,” says Master Shengjing, who is in charge of the Shanghai temple’s music ensemble. “It promotes the Buddha Dharma and its culture in musical ways, awakening spiritual consciousness and purifying souls.”

The monks beat drums, clash cymbals, chant and pray in the traditional means of preparing the mind for meditation, especially as a part of formal practice for ritualistic purposes.

Established about 20 years ago by Abbot Juexing, the ensemble is comprised of more than 50 monks, nuns, disciples and volunteers.

In 2011, the art of Jade Buddha Temple chanting was listed among Shanghai’s intangible cultural heritage. Master Wenyuan was honored as an heir of the tradition, and the “Huayan Sutras Chant” was singled out as the signature piece of the heritage. 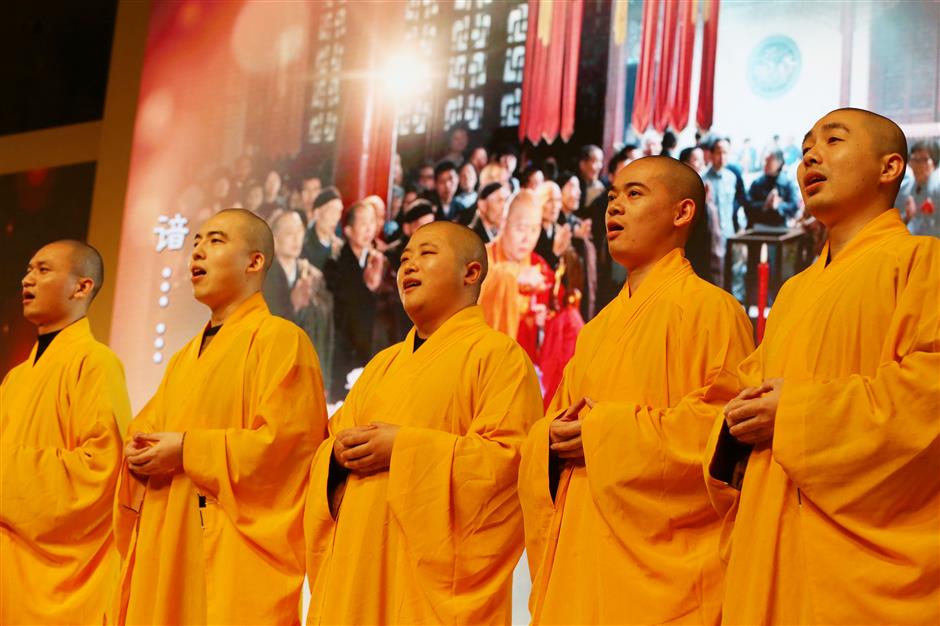 The Jade Buddha Temple ensemble performed chants at a 2015 concert marking the 20th anniversary of the death of Master Zhenchan.

During the Han Dynasty (202 BC-AD 220), this form of chanting was introduced to China along with Buddhism. It was originally sung in ancient Hindu tones and gradually mixed with Chinese traditional music.

Almost every Buddhist temple or school in China is associated with some form of traditional chanting. What distinguishes Shanghai’s Jade Buddha Temple is the artistry and uniqueness of the singing.

Since 1882 when the temple was built, its chanting tradition has been passed down by generations of abbots, often without uniformity.

“Buddhist chanting originally had no musical score, no change in cadence,” Master Shengjing explains. “What’s more, it did not require vocal and rhythmic techniques.”

In order to rescue and preserve the musical tradition in its purest form, monks at the Jade Buddha Temple sifted through old documents, recorded the sutras or lyrics, created musical scores for different pieces, built up a digital database of video clips and established an ensemble with a mixed chorus that enriched and livened the music.

Under the lead of a musical director, the monks chant, recite and pray piously during daily rituals, sutra lessons and at important ceremonial events.

It was not until the 1990s that Buddhism regained a foothold. Temples were renovated and opened to the public; schools were established to train young acolytes.

In 1999, Abbot Juexing realized that Buddhism’s future depended on cultural education. He set up the ensemble, offered free classes on Buddhism to the public and welcomed anyone to come in and learn the sutras. 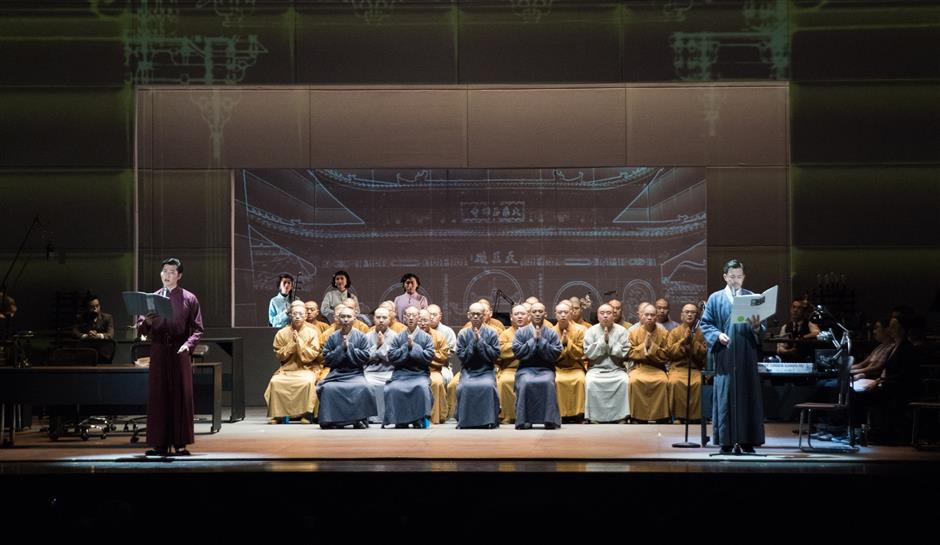 The Buddhist ensemble performs in the stage drama "Listening to Monk Hongyi."

In 2014, some of the ensemble members entered the Shanghai Conservatory of Music and became full-time students. Master Shengjing was among the first of that group.

“We were taught to compose, play instruments and sing in a professional way,” he says. “It was really hard for us at first, but we all caught on eventually. Everyone graduated.”

The ensemble includes both monks and secular disciples. Respected masters of Buddhism have been invited from across China to teach sutras in the temple.

Today, the musical ensemble includes a chorus, a dance group and a drama troupe. It has released several albums and even created a multimedia musical entitled “Heart of Buddhism Origin.”

Over the years, the ensemble has been invited to give performances across China and Asia. In 2015, it presented chanting performances at the Shanghai Concert Hall and Shanghai Oriental Art Center.

“Our temple is located at the busy downtown area, not in a deep forest or on a remote hilltop,” the master says. “So we are always thinking of ways to promote the Buddhist culture to urban dwellers in metropolitan Shanghai.

“Chanting is just one of the ways to make a better life for modern people under the guidance of Buddha.”