Chinese shadow puppetry steps out of shade and into spotlight 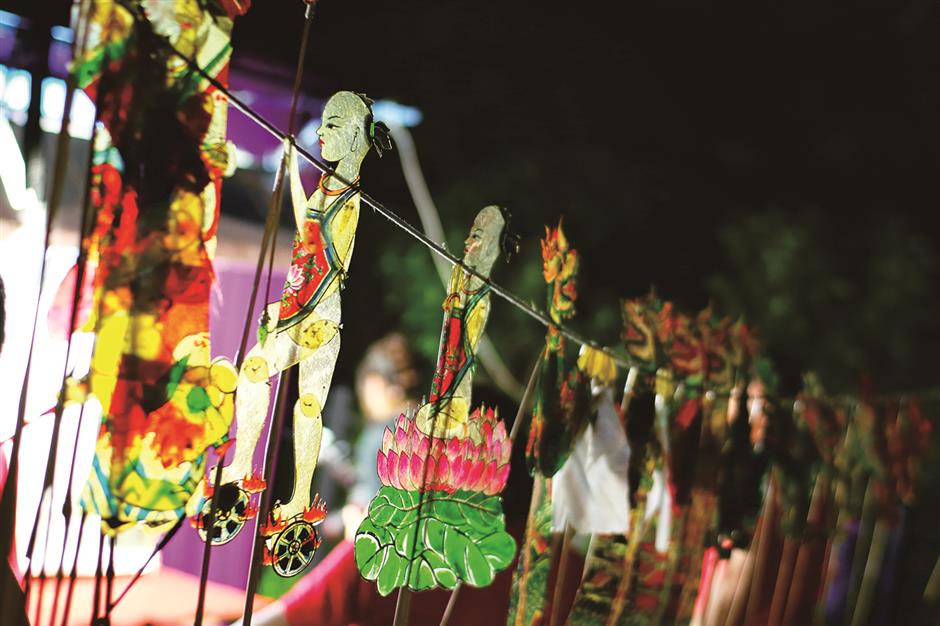 Shadow puppets are not only props but also a type of artwork. The figures are usually made of either leather or paper. The Chinese name pi ying xi is literally translated as “leather shadow play.”

More than 2,000 years ago, Lady Li, the favorite concubine of Emperor Wu of the Han Dynasty (202 BC-AD 220), died of illness. The emperor was so heartbroken by the loss that he became deeply depressed and thought of stepping down from his reign.

All his family members, relatives and aides were very worried. One of the emperor’s ministers one day saw kids playing with dolls under the sun in a courtyard. He was impressed by the lively shadows of the dolls moving around the walls and the ground. Suddenly, he got an idea on how to drag the emperor out of his grief.

That night, he staged a performance for the emperor. He cut a fabric figure resembling Lady Li and projected its shadow onto a thin curtain. The performance was so vivid that the emperor felt that he saw the spirit of his beloved in the puppet.

The emperor immediately took to it and gradually came out of his depression and his reign lasted for 54 years.

Many historians and artists believe that the shadow performance put on by the minister that night led to the creation of one of the earliest animated techniques in the world. It brought forth pi ying xi, or Chinese shadow puppetry, one of the most popular forms of theater in China, which remains a living folk tradition in the country today. 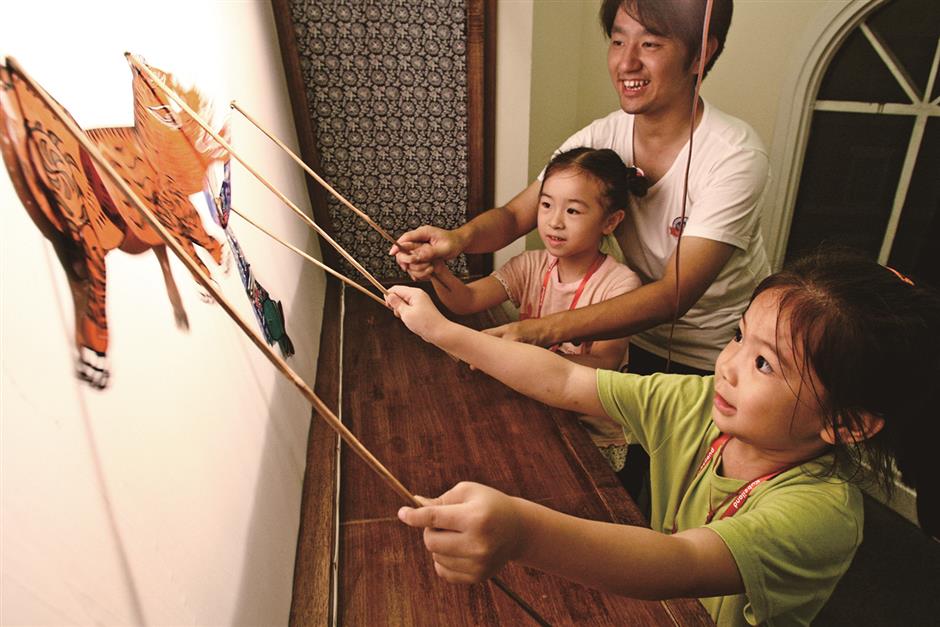 Chinese shadow puppetry is a simple theatrical form that combines storytelling and entertainment. Manipulated by puppeteers with rods, colorful silhouette figures, made either of leather or paper, are projected onto a thin, translucent cloth screen with the help of rear illumination.

Chinese shadow puppetry is a simple theatrical form that combines storytelling and entertainment.

Manipulated by puppeteers with rods, colorful silhouette figures, made either of leather or paper, are projected onto a thin, translucent cloth screen with the help of rear illumination.

A complicated show would be staged by a troupe of seven to nine artists while a simple one could be performed by only two people.

One puppeteer would manipulate the shadow puppets while narrating and singing. The other would play several traditional Chinese music instruments, such as erhu or a two-string fiddle, bamboo flute, drum, gongs, cymbals and suona or Chinese double-reed horn. Sometimes, one would help by moving the light source to create special theatrical effects. 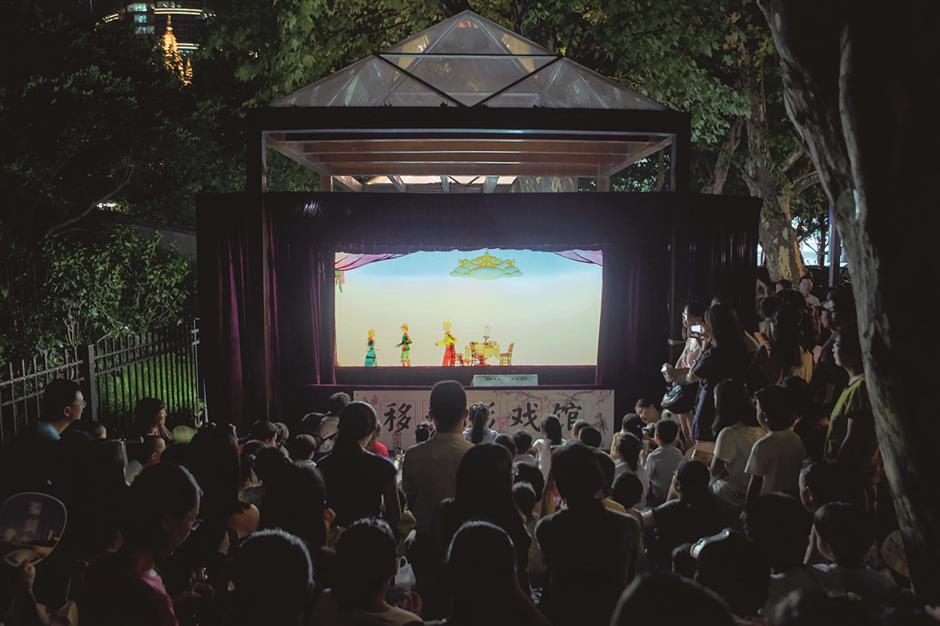 And despite its regal origin, shadow puppetry soon became a people’s art form because of its simple and portable props and usually nighttime performances.

During the Song Dynasty (960-1279) and the Ming Dynasty (1368-1644), shadow puppet play became very popular all around the country. And despite its regal origin, shadow puppetry soon became a people’s art form because of its simple and portable props and usually nighttime performances.

It was particularly suitable for farmers and working people who would like to enjoy a dramatic show after a hard day’s work.

It was also suitable for performing in military camps and remote villages.

Starting from the 13th century, Chinese shadow puppetry gradually spread to Persia, Arabia, Turkey, Britain, France, Germany, Italy, Russia as well as Siam (today’s Thailand), Burma (Myanmar), Malay Archipelago and Japan, either by Mongolian soldiers on expeditionary missions or by Western missionaries in China going back home or through the ancient Silk Road and trade.

It was reported that the Chinese shadow theater performances in Paris and Marseilles captivated audiences and made shadow puppet plays famous in many European countries.

Shadow puppets are not only props, but also a type of artwork.

They were first made of paper, but later of the hides of donkeys, oxen and other animals. Hence the puppetry’s Chinese name became pi ying xi, which is literally translated as “leather shadow play.”

Complex steps to make a figure

The process of making a shadow puppet figure is complicated and calls for well-trained skills and experience.

It could take as many as 24 steps and more than 3,000 cuts to produce a single figure.

First, the craftsmen or artists would try to find the right hides, which will be immersed and cleaned in water for at least three days. Then, they would use either knives or chemicals to process the hides to turn them into thin and translucent sheets.

After the processed hides are dried and ready, artisans would begin to draw and then carve the shadow figure out of the hide. Most of the time, they use the cameo carving method, but intaglio carving is also sometimes employed.

A man figure usually has a big, square head while a woman figure has a smaller head and thin face.

Men’s clothes are often decorated with images of dragon, tiger, water and cloud while women’s hairdos and dresses feature images of flowers, grass, clouds and of a phoenix.

The shadow figures’ facial features are also stereotyped. Heroes always have big eyes and straight-ridge noses, but villains are quite the opposite, with small eyes, protruding foreheads and sagging mouths.

The head, body and limbs of a shadow figure are carved separately and then joined with thread so that the puppeteer can manipulate the puppet to make all kinds of movements. A shadow figure can have as many as two dozen moveable joints.

The next step is coloring. The colors used to paint the shadow figure are chiefly red, yellow, blue, green and black and as bright and transparent as possible. There’s also a color code for the shadow figures: a red mask representing royalty and bravery, a black mask for uprightness and impartiality and a white mask for crookedness and treachery.

After painting, the shadow puppets will be put on heated plates or ironed to “sweat,” or dehydrate, so the color would sink into the hide and stay.

The themes of Chinese shadow puppetry show come from folk stories, fairy tales, legends and classical novels. But they are often greatly exaggerated and dramatized in the shadow puppet performances with loud music and high-pitched singing.

Despite the fact that Chinese shadow puppetry is still quite popular today among children, it is facing many challenges such as the changing tastes of the audience, fast-paced urban lifestyle and invasion of electronic entertainment.

However, governments, at all levels, are making great efforts to support and preserve this ancient performing art form.

In 2011, UNESCO also inscribed it on the Representative List of the Intangible Cultural Heritage of Humanity, saying that it “passes on information such as cultural history, social beliefs, oral traditions and local customs” and also “spreads knowledge, promotes cultural values and entertains the community, especially the youth.”