Maintaining tradition one stitch at a time

With deft yet rough, calloused hands, Wu Shuxin, Gao Xiufang and Zhu Qinghua — three Songjiang natives — can sit for a whole day stitching, without a touch of fatigue.

They are carrying on the time-honored tradition of Gu embroidery, an ancient art designated as China’s intangible cultural heritage.

“We’ve become accustomed to it,” Wu says with a smile. “Who knew we would be doing it our whole life.”

Gao and Zhu first learned to embroider in 1972 at the Songjiang Handicraft Factory, while Wu joined in 1979. At the time, ancient crafts were enjoying a revival.

Their teacher was master Dai Mingjiao (1922-2018), a first-generation heiress to Gu embroidery, who summarized all the different skills, including various stitches, sewing techniques and color selection.

“It’s a technique requiring lots of time and patience,” Gao says. “But when you are really into it, it’s fun.” 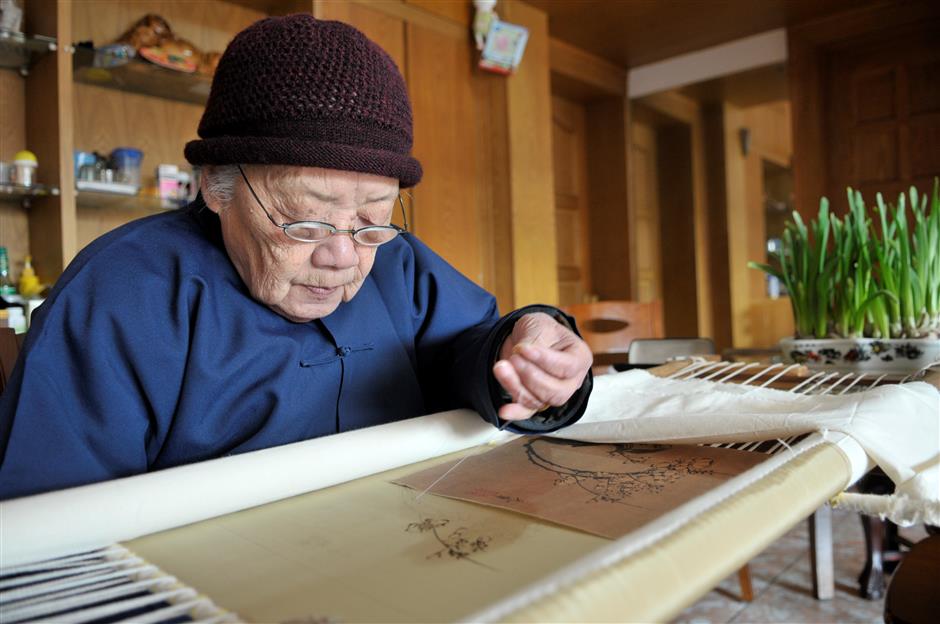 Gu embroidery, or guxiu (顾绣), is a style originating in suburban Shanghai’s Songjiang District during the Ming Dynasty (1368-1644). Often called “painting by threads and stitches,” it was devised by the Gu family, whose work mainly featured landscapes, animals and people in elaborate settings.

One silk thread used in Gu embroidery can be thinner than a human hair, while stitch work has to be close and meticulously aligned. Mastering the style requires at least a dozen different sewing skills.

Han Ximeng, a granddaughter-in-law of the Gu family, was the first to move embroidery out of the decorative realm and promote it as art. Her advocacy helped the style become more popular.

Most of Han’s work was inspired by famous paintings created between the 10th and 14th centuries. Her characters in silk captured vivid facial expressions, and her realistic style greatly influenced Su embroidery in neighboring Jiangsu Province.

During the Qing Dynasty (1644-1911), Gu Lanyu, the family’s great-grandmother, set up the first embroidery workshop and recruited apprentices.

“So it can only be art,” Zhu explains.

A silk yarn is typically split into 16 threads for the embroidery. However, patterns such as eyebrows, hair, soft fur and fog-shrouded mountains in the distance require the yarn to be split even finer into 32 threads. 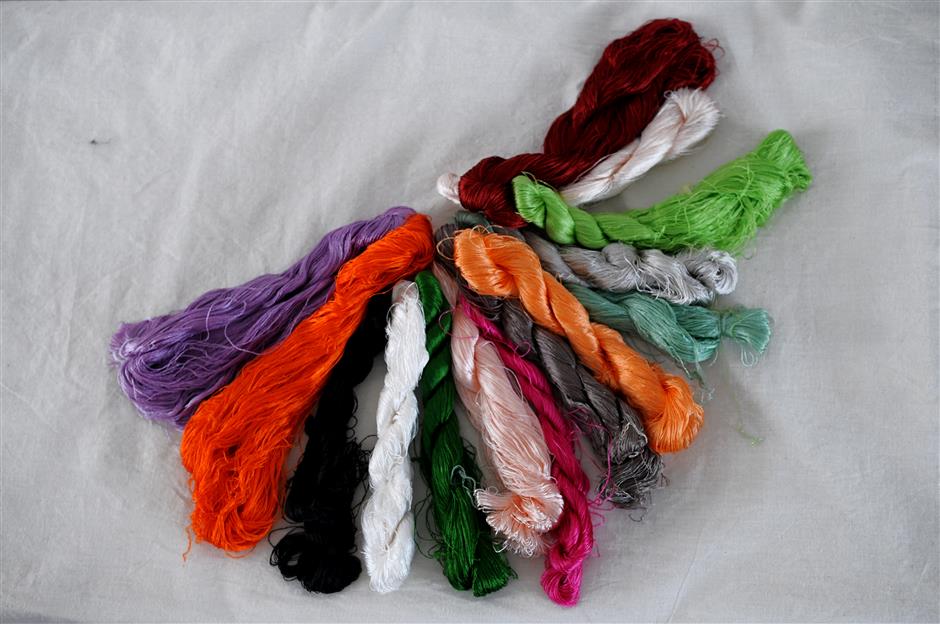 A bunch of silk yarns 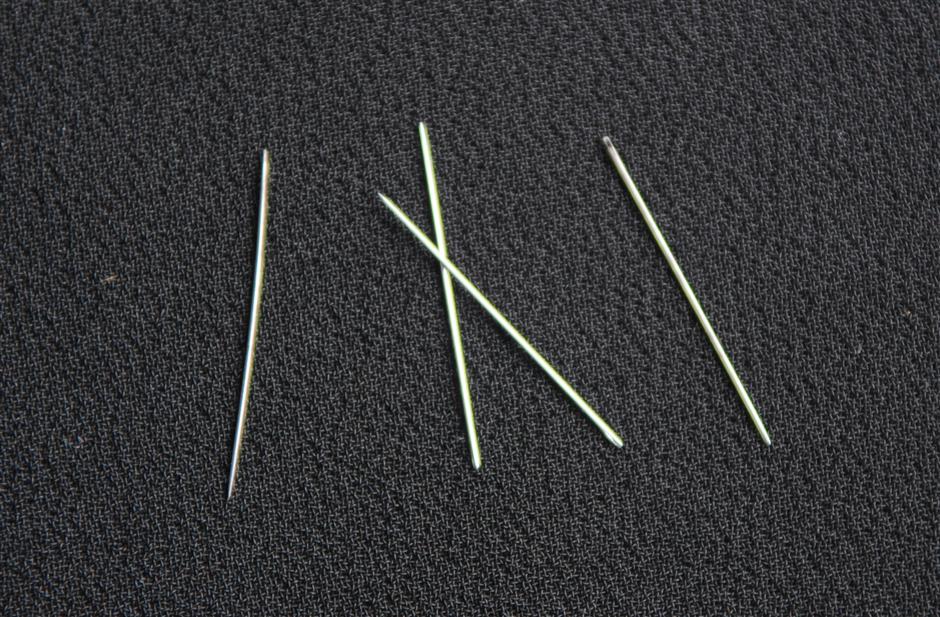 The three embroiderers once took part in a project to produce a silk replica of a Yuan Dynasty (1271-1368) painting by artist Zhao Mengfu.

More than 85 centimeters long, the piece adopted various sewing and stitching skills to restore the sparkling waters of the lake and the moist atmosphere around the distant looming valleys.

Thin, even and smooth are the three key factors in perfect Gu embroidery, bringing out the texture of leaves, stones, feathers, skin and others.

Silk splitting is hard, but color matching is no easy job either. In replicating paintings, an embroiderer has to pick precisely the correct color from hundreds of hues. It all comes down to intuition and keen observation.

“You need to capture the right color. It requires practice and talent,” Gao says.

There are over 1,500 colors and a good embroider must select the right one.

Blue mingled with yellow. Gray flecked with red. Green in an abundance of shades. The differences can be quite slight. Sometimes a man’s hair can have as many as 15 shades, from gray to black, while a fish scale can have up to five shades.

If an embroiderer cannot find the right color, she will entwine two colors together with 1/16 threads and blend them perfectly with natural shades.

When working on Zhao’s piece, the embroiderers had to dye the threads themselves to get the ideal bronze color to revive the old painting’s simple and unsophisticated touch.

“We have to strive to be loyal to the original painting,” Gao says. 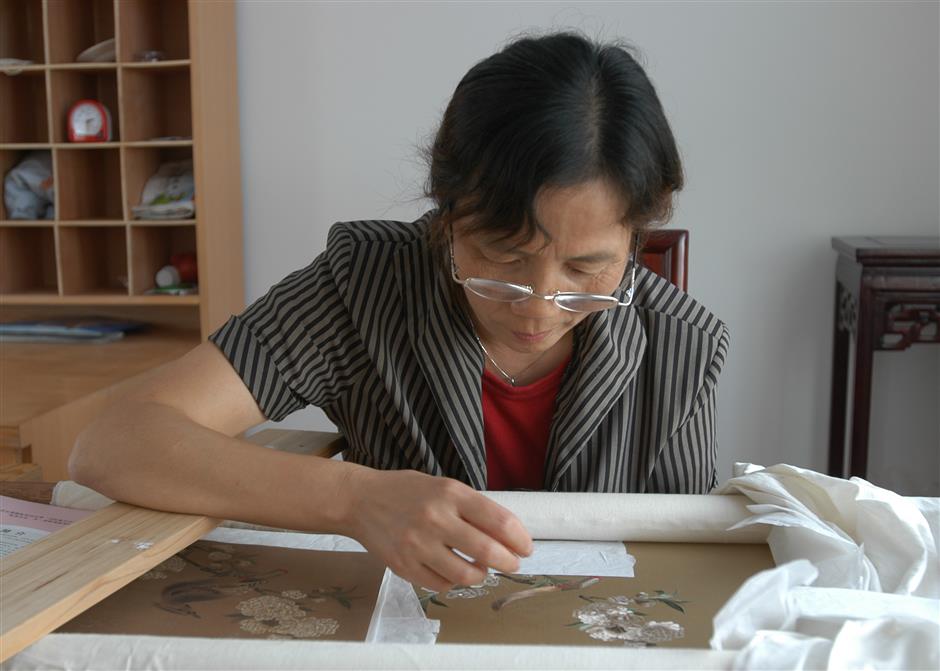 Gu embroidery reproduces Song and Yuan Dynasty paintings renowned for their meticulousness and delicacy: a bird’s flossy feathers, the petals of a flower or a beetle’s antenna.

They are often not in big bright colors. The focus is on details and elegance.

When it comes to embroidering a figure painting, people’s expressions and postures are the hardest part, while a landscape painting must precisely restore the ink’s changes — thick, light, dry and smooth.

In recent years, Gu embroidery has become a hot commodity in the auction market. In 2014, on China’s 9th Cultural Heritage Day, two Gu embroidery pieces — “Picture of Eight Children” and “Monk Budai,” both by master artisan Qian Yuefang — sold for 510,000 yuan (US$75,930) and 440,000 yuan, respectively.

“Embroidery is a niche market in the art world, appreciated and collected by only a minority of people,” says Wu Yangping, director of Songjiang’s Intangible Cultural Heritages Protection and Promotion Center. “Most of the works are collected by the museums and art institutions.”

Though Gu embroidery nowadays is considered the best of the art, it is probably still less-known than Su embroidery because it fell from favor during the reign of Jiaqing (1796-1821). After the founding of the People’s Republic of China in 1949, local government launched projects to rescue the dying tradition, but the embroidery fell from grace again in the 1960s and 1970s.

Despite setbacks, Gu embroidery has survived and even thrived. In 1987, Songjiang Museum mounted a display of contemporary embroidery, which drew great attention in the city for the first time.

Gu embroidery pieces have been exhibited in Japan, South Korea and across Europe. The three local embroiderers are doing their part to keep the art alive. Each can only embroider one piece every year.

“Sometimes I cannot finish a tree leaf in a day,” Zhu says. “Not productive, but this work flow suits us because only in a no-hurry mindset can we work best.”

In addition to carrying on stitching, they also teach young people and generously share their stitching secrets.

“We have been stitching all my life,” Wu says. “We have never given up and we will never give up.” 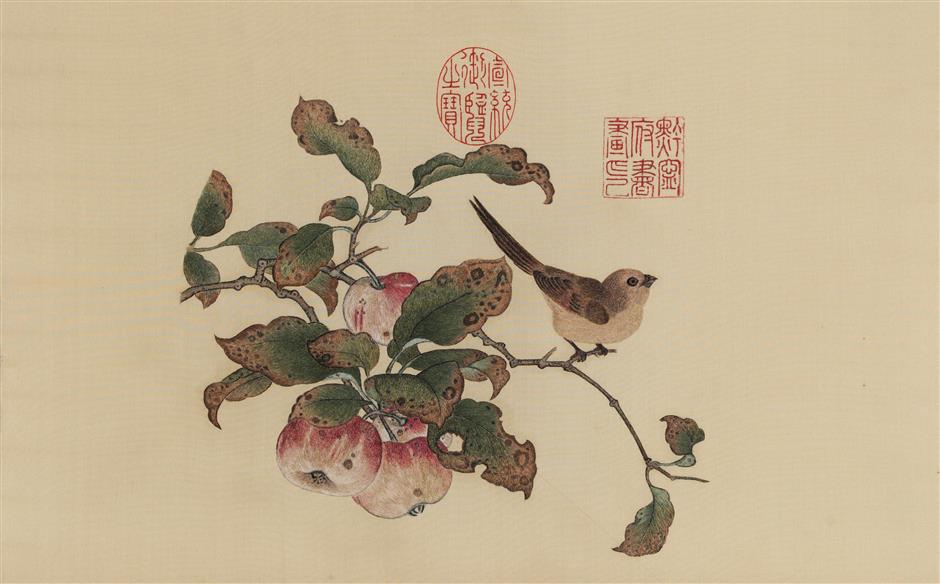