Wang Hao’s workday starts before 7am. He goes to the Wangbaohe Hotel, changes into his executive chef’s uniform and goes to the kitchen to await the arrival of live, kicking hairy crabs.

Hairy crab season, from autumn to early winter every year, is a much-anticipated occasion for Shanghai residents to feast on crab, accompanied by warmed yellow rice wine. Ah, such culinary pleasure!

Wangbaohe and hairy crabs go together in the public mind. The hotel restaurant has been serving up the specialty for more than a century.

Wang has been working at Wangbaohe for nearly 40 years, contributing much to the development and maintenance of the restaurant’s fame. He has turned crab into more than 80 courses of dishes that comprise different variations of “all-crab feasts.”

The crab come from Yangcheng Lake, a freshwater lake in neighboring Jiangsu Province, which is said to produce one of the best — if not the best — hairy crabs in China.

Wang instructs his sous-chefs to tie the crabs, put them in a large tank and wash them with a hose for hours.

“The cleanliness of the crab affects their taste,” Wang says. “When you open the crab shell, you should see very clean gills and a pure white heart.”

After the crabs are cleaned and cooked, they are sent to an air-conditioned room where about 10 kitchen assistants dig out all the meat, roe and cream with scissors and scraping knives. 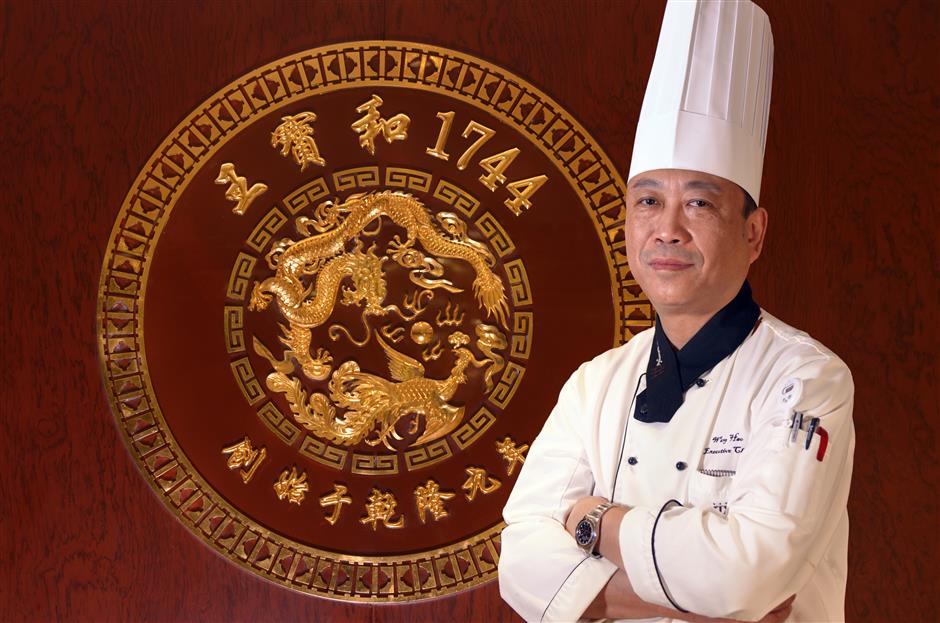 Wang Hao has been working at the Wangbaohe Hotel for nearly 40 years.

Wang remembers when he was a kitchen apprentice and had to do similar work.

“Back then, I had to deal with hundreds of crabs a day,” he recalls. “After work, my clothes stank of crab. When you eat crab, you find the smell appealing, but if you work with hundreds of cooked, cold crabs, the smell is too strong to be pleasant.”

Digging out crab meat was not, however, his first job when Wang came to Wangbaohe in 1981 after graduating from high school. He washed dishes, washed vegetables and cleaned the restaurant — almost anything but cooking.

But Wang, both gifted and hard-working, persevered. He learned skills from a master chef and worked his way up the ladder to become a chef himself.

“There is an old saying: ‘The master teaches the trade, but the apprentice’s skill is self-made,’” he says. “That pretty well describes the relationship between me and my master. The cutting skills and heat controls need long-term practice, but what’s the most important is to learn everything there is to know about crabs.”

Wang is a master of the knowledge he knows what is a good crab, the taste and texture differences of different parts of a crab and which food ingredients go best with which parts.

Crab roe with peony shrimp is one of his creations. Wang extracts oil from pure crab roe and stir-fries the shrimp in it until it turns golden. Then he arranges the shrimp in the shape of a peony flower and puts crab roe in the middle.

The sweetness of the shrimp isn’t overwhelmed by the rich flavor of crab roe. On the contrary, the two flavors complement each other well. 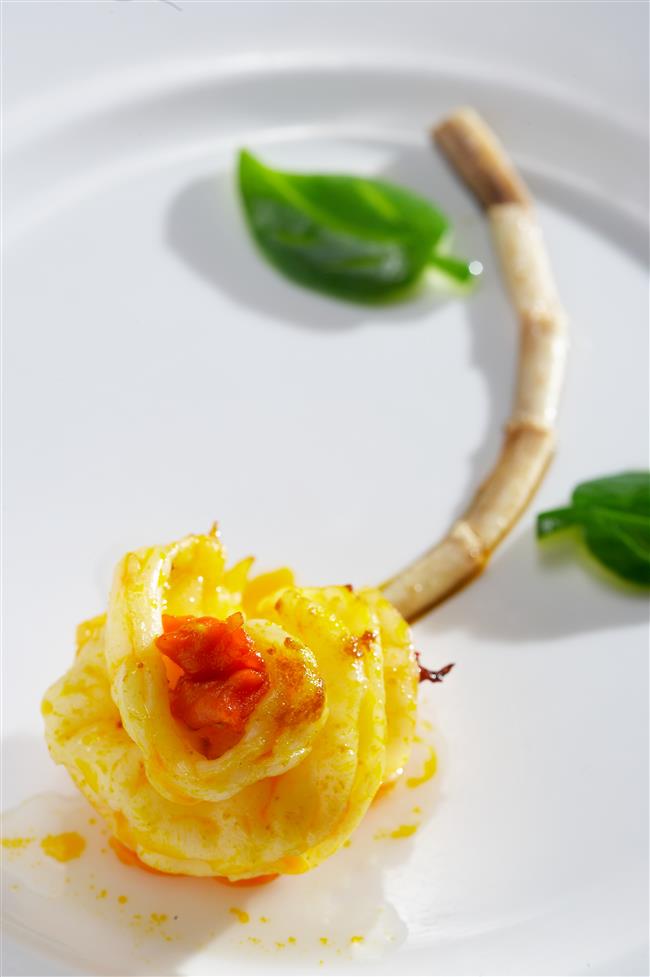 Crab roe with peony shrimp is one of Wang Hao’s creations.

“I found that the bean starch sheets used in Xinjiang and in northeast China had more strength and went better with crab cream,” he says. “Now the dish is smooth yet chewy, and customers can enjoy the flavor of crab cream to the maximum.”

Wang deflects questions about himself, preferring to talk about crabs and cooking. Eyes shining with enthusiasm, he is only too happy to explain now to select good crabs and to give tips on how to eat them.

“You can see the quality of a crab from its color and strength,” he says. “High-quality crab has a very dark-colored back and a very white belly. If you grab one, the legs will struggle fiercely. And when you eat a crab, you should eat the legs first, then the pincers and then the body. In this way, you taste different layers of flavor, from light to rich.”

He continues: “If you eat hairy crab in June and July, when we call them liuyuehuang (crab roe in June), remember to add some sugar to the dishes or to the dipping sauce because the roe in that season may be a little bitter. The sugar restores the taste to its autumn splendor.”

Talking to customers sometimes gives Wang culinary inspiration. The dish sautéed crab leg meat with asparagus is now found in nearly every restaurant serving hairy crab. According to Wang, the recipe originated from the suggestion of a customer in the early 1990s.

“He was a frequent patron, and one day he said to me: ‘Why don’t you pair asparagus with crab meat? I bet they fit well together,’” Wang recalls. “And so they did. After some experimentation, I created the dish.”

Wang’s creative spirit has been guiding his work for decades. For his contributions to fine Shanghai cuisine, he was named a winner of the Shanghai Standouts award, which promotes workplace excellence in the city. He has also been honored as an official “inheritor of crab culture” in Shanghai.

“Crab means much more than dishes on a table or seasonal delicacies,” he says. “It is a part of the culture in the Yangtze River Delta region. In fact, in the ancient Chinese novel ‘A Dream of Red Mansions,’ you will find paragraph after paragraph about how families bonded over a crab feast and wrote poems about crabs.” 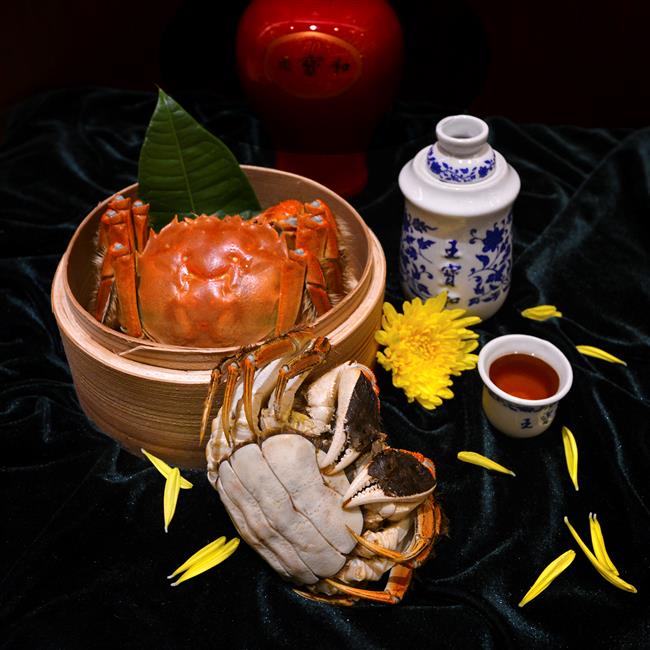 Hairy crabs delight the palates of Shanghai residents from autumn to early winter every year.