Taking a chainsaw to New York art and architecture

The whole city would have been his playground, if Gordon Matta-Clark still lived today.

As a trained architect, the New York artist treated buildings as an artistic medium and is best known for carving massive holes into derelict walls, representing a unique case in 20th-century art history.

The exhibition “Passing Through Architecture: The 10 Years of Gordon Matta-Clark,” which runs through February 16, at the Power Station of Art, is the first large-scale exhibition of Matta-Clark’s work in China. It traces the interdisciplinary artist’s remarkable thinking and avant-garde works from 1968 to 78, with more than 400 drawings, photo-works, films and archival documents.

In 1968, Matta-Clark graduated from Cornell University’s Department of Architecture and returned to his New York City birthplace, which was undergoing a post-war “urban renewal plan” and an economic transformation. Many old buildings faced demolition, slums were razed, ethnic minorities expelled, and a large number of people were left homeless, while the white middle class moved away from the inner city.

The urban decay prompted Matta-Clark to devote himself to a series of practices that criticized modernist urban planning and created temporary communities and autonomous spaces.

His renowned “cuttings” began in 1971 when he physically sliced open and dissected buildings, de-familiarizing them into giant inhabitable sculptures.

By late 1973 he cut through a whole building for the first time to produce the “A W-Hole House.” The following year, Matta-Clark completed his most famous work “Splitting” by cutting in half an abandoned New Jersey home and leaning one half of it back a little. 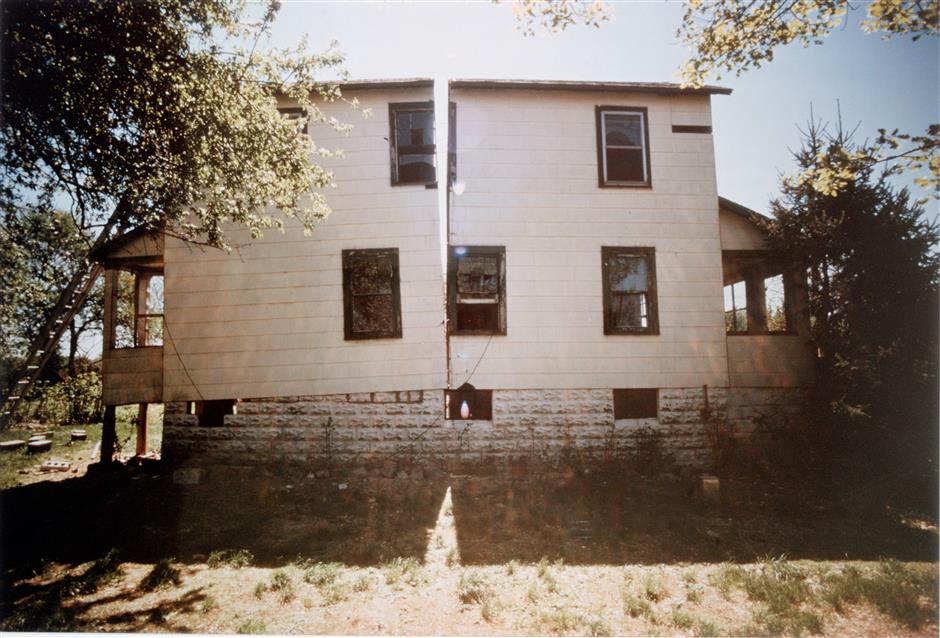 Courtesy of The Estate of Gordon Matta-Clark and David Zwirner

In 1975, he illegally trespassed into an old warehouse at Pier 52, on the Hudson River in New York, where he made a series of cuts, including a huge half-moon-shaped hole in the end wall. Called “Day’s End,” the site-specific work was regarded as one of his most ambitious and controversial works in the Big Apple.

The same year, Matta-Clark was invited by the Paris Biennale to work on a temporary project to cut two neighboring 17th century buildings that were facing demolition to make way for the Pompidou Centre. He connected and cut through the two buildings by means of a “Conical Intersect,” a cone-shaped cut up an angle that allowed passers-by to glimpse up and through the normally hidden complex structure behind the facade — a good example of the artist’s literal “de-construction” of existing structures to reveal hidden or unexpected urban narratives.

Matta-Clark died of cancer in 1978, at the age of 35. His final building cut “Circus-The Caribbean Orange,” completed in Chicago shortly before his death, was perhaps the most dramatic of all. 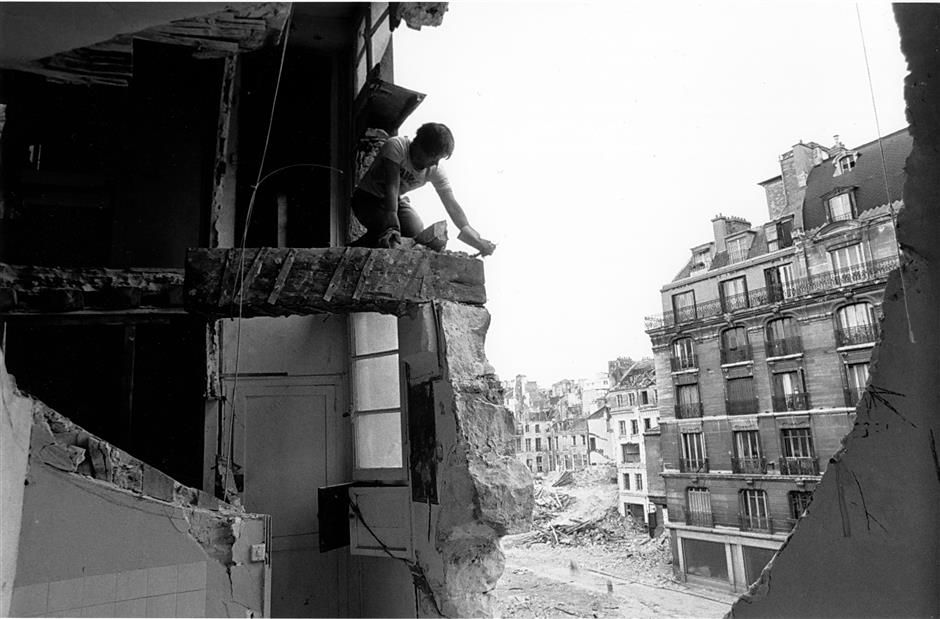 Gordon Matta-Clark cut the “Conical Intersect” in Paris in 1975.

“Matta-Clark described cutting buildings as a kind of theatrical performance that attempted to reveal the fragility and instability of the buildings we inhabit, as well as the complexities and hidden life they embody. He tried to show buildings are all already filled with holes and secret lives long before he intervened,” said Mark Wigley, curator of the exhibition.

Notably, in the same spirit of Gordon Matta-Clark’s cuts, all works in this exhibition are visible from any point and there is no prescribed path. Visitors can explore parallel chronological displays that focus on the artist’s building cuts, as well as his other works in cooking, performance, poetry, publication and collaboration with others — each of which could be a compelling exhibition in its own right.