Ships inside bottles: How do they do that?

Dozens of ancient Chinese boats are “berthed” at the Putuo branch of the Liu Haisu Art Museum as part of an exhibition displaying model ships made by Wang Shuanghuai and his protege Chen Changhua.

The eco-friendly models are made of wood from old furniture, used cloth, discarded bamboo mats, leftover ox bones and even the hard kernels of jujube. The smallest ship is about the size of a grain of rice.

“I once couldn’t find the tiny model ship,” said Wang, 62. “Then I realized it was hidden in my nail.”

Wang has enjoyed handicrafts since his childhood. He made wooden cats and dogs as toys for himself. But boats were always his special interest. At a creek near his house, Wang made a little wooden boat while his playmates made paper boats and raced them on the water.

Wang joined the navy after high school and became captain of a cargo ship after retiring from military service. Facing endless days on the seas, fellow mariners sometimes took to drink to relieve loneliness. Their discarded bottles inspired Wang to build ships in them.

“Since then, I have had a habit of collecting alcohol bottles, which are transparent and not too thick,” said Wang.

Sailing around the world, Wang brought back all sorts of bottles that once contained brandy, whisky, vodka, beer, Chinese distilled liquor and Shaoxing rice wine.

According to Wang, the combination of bottles and ships implies an auspicious meaning: safe and smooth sailing. In Chinese, the word for bottle is homonymic with that of “safety.”

Exquisite model ships enclosed in glass bottles, made by Wang Shuanghuai, are a highlight of the exhibition.

One of the highlights of the museum exhibition is a series of 24 model ships, each inside a bottle. The works took Wang 10 years to complete.

The design of the boats is based on the scroll painting “Along the River During the Qingming Festival” by Zhang Zeduan, a famous painter of the Northern Song Dynasty (AD 960-1127). Fishing boats, grain boats, cargo boats and sightseeing boats. Wang recreates the prosperity and lifestyle of that time.

The model ships are so exquisite that all windows and cabin doors can be opened. The tiny windows are delicately carved; the frame pieces are as thin as hair.

Many visitors are naturally curious how Wang gets ships through small bottlenecks. He explained that components are made first and then carefully inserted using a very long tweezer. Even more surprising, the components are all joined by mortise and tenon.

“It is the most difficult part in the whole process,” said Wang. “If there is a mistake, all the effort is in vain.” 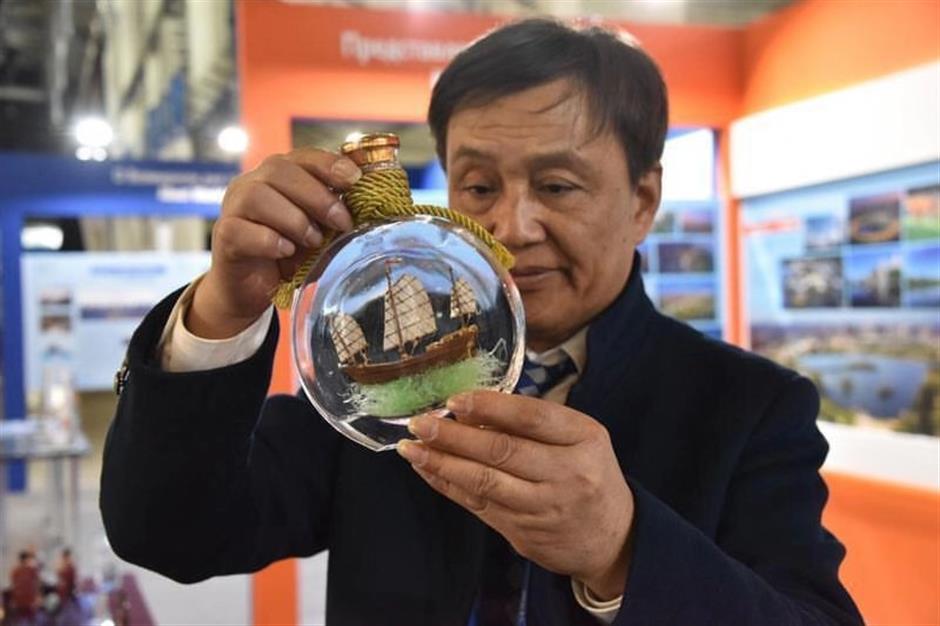 Wang Shuanghuai, once a captain, continues to show his love for the sea through his maritime art.

Apprentice Chen came across Wang’s works seven years ago. An antique lover, he was thrilled by the maritime art. So Chen learned from Wang how to make model ships.

“I always make a detailed drawing before making a model ship,” said Chen. “The drawing features the structure of a boat and the sizes of different components. It is almost like the design of a real ship.” 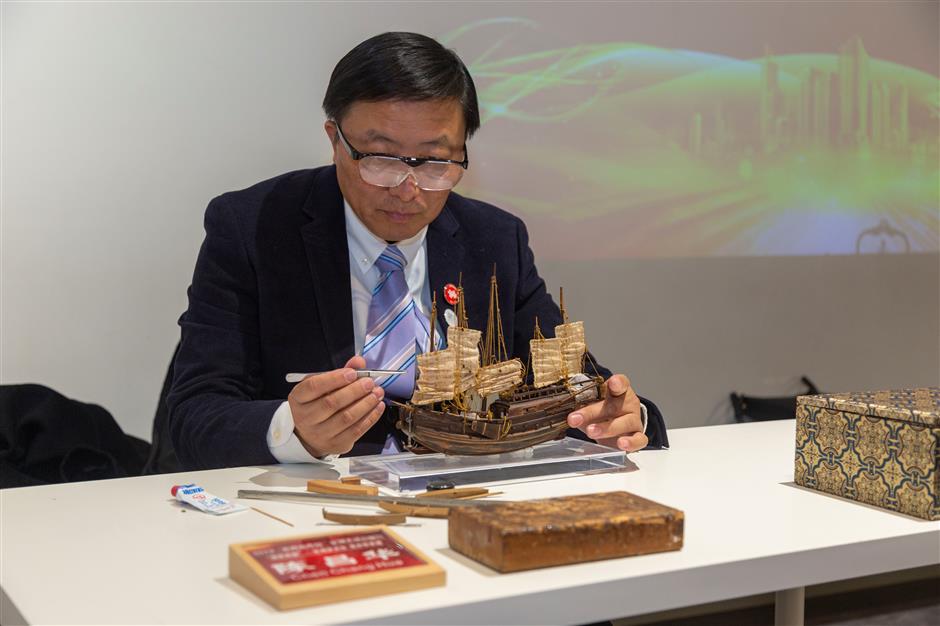 Chen Changhua works on the model of a sand junk.

In the exhibition, Chen presents the models of Four Great Junks of ancient China: the Fujian junk, the Guangdong junk, the Lumei junk and the sand junk.

The Fujian junk is famous for its water-tight bulkhead, which allows the vessel to remain afloat even if one or two cabins are accidentally damaged in the course of navigation.

The Guangdong junk is made of ironwood, which is durable and insect-resistant. The Lumei junk, also called bird junk for the shape of its bow, is a fishing vessel. The sand junk, which was common in Shanghai, is perfect for sailing across shallow shoals.

“With the Huangpu River, Shanghai is closely associated with water,” said Chen. “The boats sailing on the river bear witness to the development of the city.”

Last year, Wang and Chen were invited to World Cities Day, an event that took place in Yekaterinburg in Russia. Their works were displayed, much to the admiration of foreign visitors. 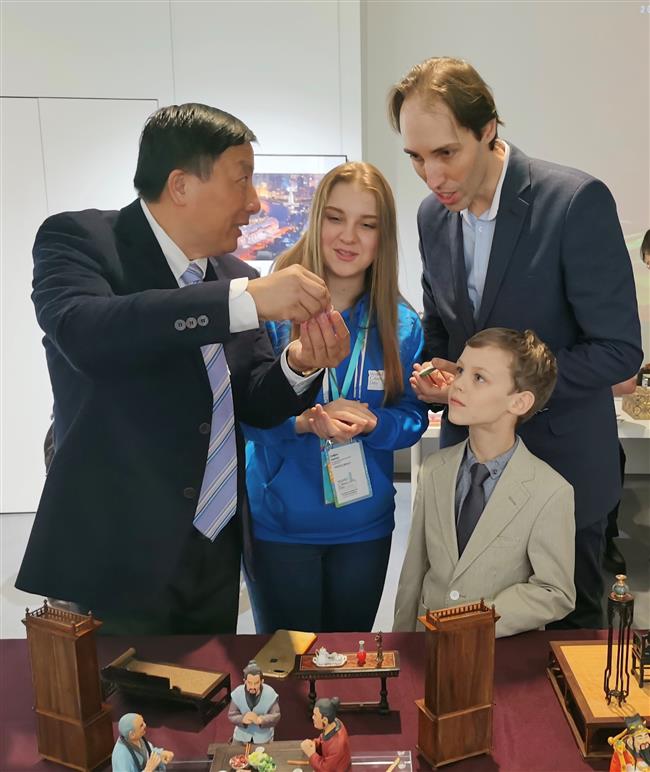 Chen Changhua explains how he makes model ships to visitors at a World Cities Day event in Russia.