'A Thread of Light' inspired by love of sea and sailing

The exhibition, “A Thread of Light,” is under way at Liuli China Museum Shanghai, featuring the works of three generations of British kiln-cast glass artists.

The exhibit is showcasing 36 pieces of glassworks created by Keith Cummings, the founding father of the British Contemporary Glass Movement, a sea-inspired series by Colin Reid and seven items by the latter’s former apprentices and collaborators.

In the 1970s, Reid began studying glass under Cummings, drawing inspiration from the realms of nature and ethnology. His designs exude a profound understanding of the world. Today Reid’s glassworks can be found in 53 museums around the world, including the Victoria and Albert Museum in London and Corning Museum of Glass in New York.

The 67-year-old’s Asian-inspired piece “Bamboo Scroll,” a major commission, is permanently on display in the entrance hall of the Shanghai Library.

For this exhibition, the Cheshire-born Reid presents the audience with a collection inspired by his love of the sea and sailing.

Saturated in color, his fluid “Wave” fluctuates across form and changes in light to result in a carefree and untethered vastness spanning heaven and earth.

The highlight of the exhibition goes to a collaborative piece titled “Loretta’s Orchid” by Reid and Loretta H. Yang, founder of contemporary Chinese liuli (crystal glass).

Yang’s glass orchid is delicate in form and tenacious in spirit while Reid’s contribution comes in the form of optical glass and meticulous cuts for maximum refraction. In fact, the work is a fusion of British optical precision with the poetic nature of Chinese flowers. 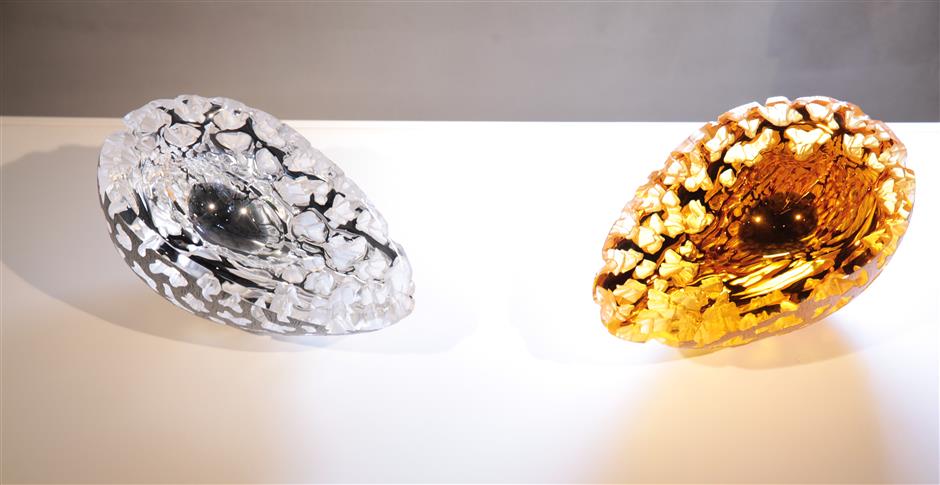