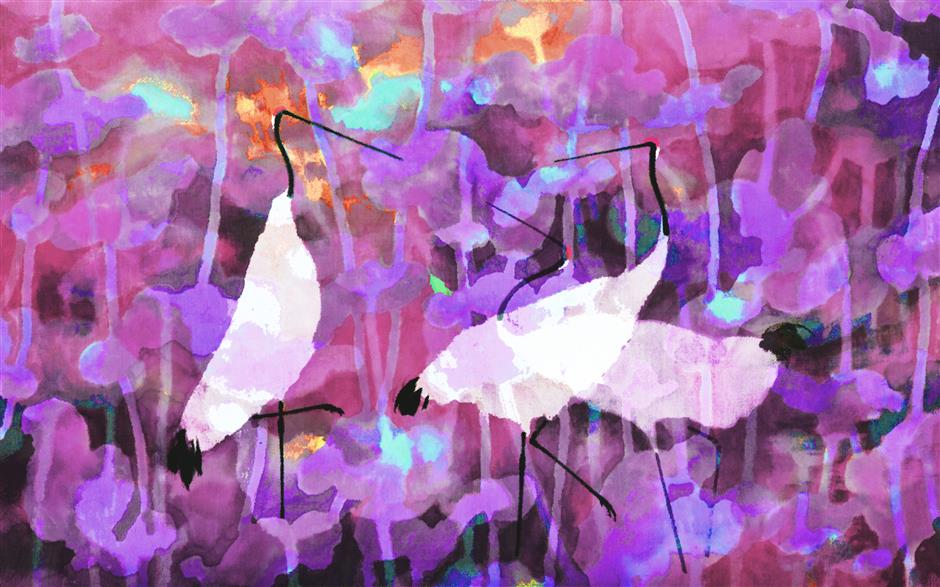 In an ancient town in Jiaxing, a Zhejiang Province city known as the “home of silk,” there is a ginkgo tree that’s some 1,500 years old. In an old building nearby is a gallery with art dating back much further.

The gallery showcases what is called “Bo painting,” which is more than 3,600 years old. “Bo” is a collective term referring to various undyed silks, such as juan (tabby silk), ling (damask silk), sha (plain gauze) and zhou (crepe).

Mu Yilin, 76, who grew up in Jiaxing and has devoted 40 years of his life to Bo painting, said the art form is “the origin of Chinese painting but has long been neglected.”

“Bo painting is art on silk,” says Mu. “Silk painting can be found all over the world, but only Chinese silk art can be called Bo art because it is embedded in Chinese culture, esthetics and a set of strict painting standards.”

The earliest traces of Bo painting were found in a Shang Dynasty (16th-11th centuries BC) tomb on the outskirts of Luoyang in Henan Province, Mu explains. The first two intact Bo paintings — “Figure with Dragon and Phoenix” and “Figure Riding A Dragon” — were unearthed from a grave of the Warring States Period (475-221 BC) in Hunan Province and now are held by the Hunan Museum.

The art form reached its heyday in the Western Han Dynasty (206 BC-AD 25). A T-shaped Bo painting of that era was dug up at the famous archeological site Mawangdui in Hunan.

The popularization of paper beginning in the Yuan Dynasty (1271-1368) threatened the survival of Bo art. Continuous strife from the late Qing Dynasty (1644-1911) to the founding of the People’s Republic in 1949 also hindered its development. Painters in the turbulent times rarely focused on such a delicate art.

“Unlike painting on paper, which is fast and doesn’t necessarily require strict training, painting on Bo is time-consuming and sophisticated,” says Mu. “In the art, Bo is believed to be spiritual and the painter merely plays a supporting role. The texture of the material mustn’t be covered by thick paints. I always approach it with a certain reverence.” 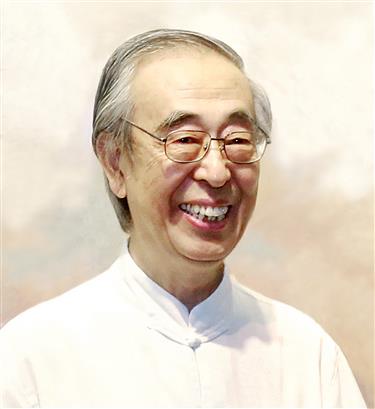 When he was 35 years old, this humble man shared first place in the Shanghai Art Exhibition with the famous Chinese landscape painter Lu Yanshao (1909-93). The more famous he became in art circles, the more Mu began retreating from the public spotlight.

He learned the technique of Bo painting from his mentor Zheng Mukang (1901-82), while studying at the Shanghai Academy of Fine Arts. Zheng invited Mu to his home to study Bo painting every Sunday afternoon for five years, just before the “cultural revolution” (1966-76) that stopped artistic endeavors.

Mu turned his focus to ink-wash paintings on paper during that period and gradually forgot about Bo painting.

In 1983, Mu created an artwork that changed the course of his life. The work, entitled “Love in the Rain,” freezes the warm moment when a retired man volunteers to direct traffic during a rainy Mid-Autumn Festival. His gray-haired wife and a grandson bring him a mooncake and a pair of rain boots.

The work is painted on tabby silk, a kind of silk taffeta with an irregular wavy finish, that Mu bought in a fabric store. But Mu found the color was too bright for a picture depicting a gloomy, rainy day, so he covered the painting with another layer of silk. To his surprise, it created the hazy effect he was after.

“Suddenly it clicked. This was what Zheng taught me drawing on the back of Bo,” says Mu. “I felt sorry that I hadn’t applied the techniques that Zheng passed on to me earlier. His death in 1982 hit me hard.”

Mu then decided to dive back into the Bo painting and didn’t “return to the surface” until 2012, when he held a Bo painting exhibition in Beijing.

In order to make more time for painting and his family, he worked as a chief designer in an enamel factory located just next to his house. He spent all his free time on Bo painting. 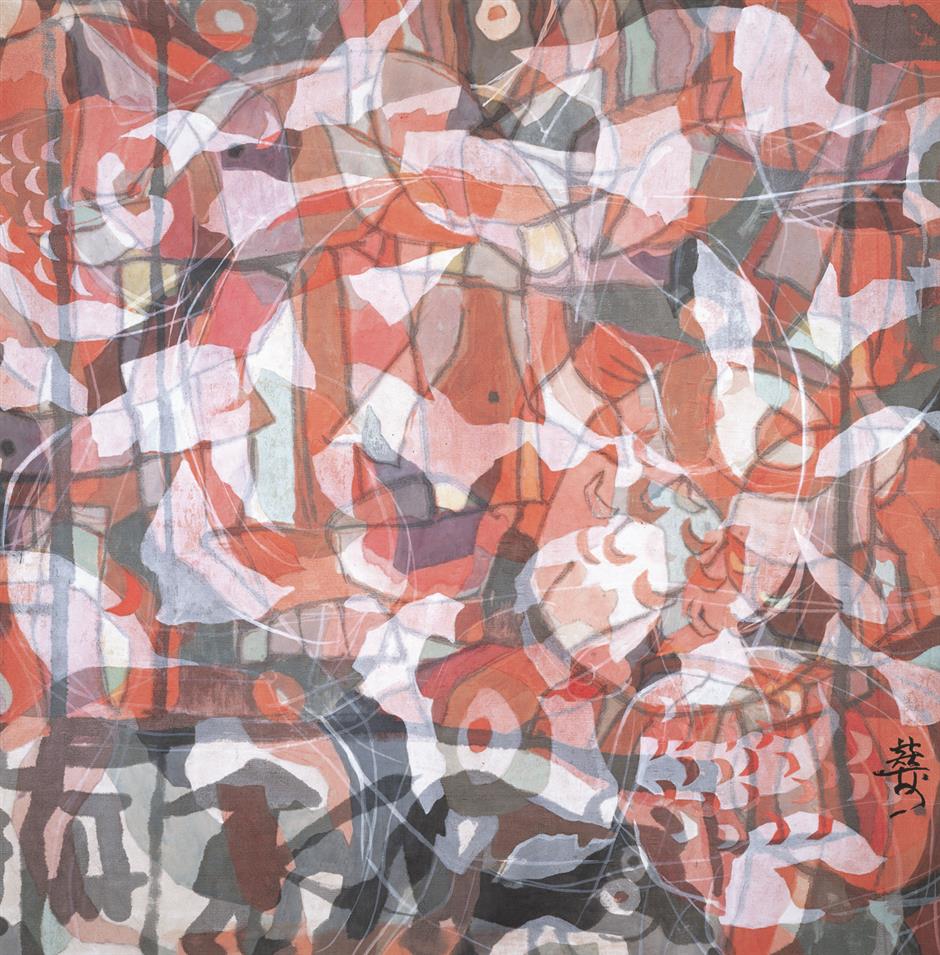 "The Impression of Lantern Festival No. 9, Welcoming Spring”

His love for silk originated in childhood.

He recalls boyhood days in Jiaxing, gazing upon cattle grazing near mulberry trees, while eating mulberries and singing songs. Picking up mulberry leaves, he raised silkworms as pets. At Spring Festival, his mother would wear silk shoes she self-embroidered and dress Mu in newly embroidered silk trousers.

“Mulberries, silkworms, silk and art were important parts of our lives,” says Mu.

To support her husband’s passion, Mu’s wife learned how to mount pictures from a master restorer at Shanghai Museum. She mounted all of Mu’s works. Their two daughters both majored in fine arts at college and now have inherited their parents’ skills.

“Because of me, my family lived an ascetic life, while other contemporary painters got rich,” he said. “I am very grateful for the support of my wife and daughters. Being an artist, one must buckle down to the art, which takes time. It is just like cooking meat that needs to be simmered slowly.”

After years of experience, Mu has defined three prime essentials of working with Bo materials — overlapping, which creates the illusion of depth; reflection, which shows different tones from different angles; and high saturation.

“Compared with paper, which creates a ‘go back’ effect as it absorbs pigments, Bo creates a ‘go forward’ effect because of its characteristics,” says Mu. “Inheriting the traditional techniques of Bo painting, I have also innovated the art form.”

Different from ancient Bo paintings, which are realistic and mainly feature myths, religion and figures, Mu’s modern works tend to be impressionist and bold.

“I endow my Bo paintings with contemporary esthetics and spirit,” says Mu.

Green mountains and blue waters in “The World Is A Poem No. 39, Poetry World Memory of Jiangnan” by Mu Yilin turn gold or silver depending on the angle of viewing.

The effect of color change is a highlight of Mu’s works. One of his Bo paintings, entitled “The World Is A Poem No. 39, Poetry World Memory of Jiangnan,” features green mountains and blue waters, which turn gold and silver, respectively, when viewed from a different angle.

Apart from mineral pigments, which are commonly used in Chinese paintings, Mu also uses foreign pigments like gold dust paint from Germany and Japan. Mu said that he has searched the world for appropriate pigments. He spent more than 30,000 yuan (US$4,230) on pigments during one trip to Japan.

Mu and his daughters have designed an array of creative accessory products based on Bo art, such as umbrellas, scarves and cheong­sam dresses. Cooperating with a graphene company, they have created a graphene-based heated, decorative wall.

“I intend to continue to spread the word about Bo painting,” says Mu. “Some people have praised me as a master, which I refuse to accept. I am just an explorer and a person who paves the way. Fame and fortune mean nothing to me.”