Fusion of photography, calligraphy in focus

“The Abode of Illusions: The Garden of Zhang Daqian,” an ongoing exhibition at Yuz Museum, features a group of photographs by Hu Chongxian (1912-1989) with inscriptions by the painter Zhang Daqian (1899-1983). This is the first time in the past 40 years the artworks have been showcased in China’s mainland.

Zhang, master of traditional Chinese painting, settled in Taiwan in his twilight years, where he designed and built his last garden in the picturesque Waishuangxi in Shilin District, Taipei. He named it Moye Jingshe, meaning the Abode of Illusions — an inspiration from Buddhism.

With scenic landscaping elaborately designed by the artist, the garden’s every tree, bush and flower is the epitome of Zhang’s enthusiasm for nature and the pursuit of aesthetic perfection.

He planted rare species of his favorite lotus and plum blossoms in every corner of the garden. Almost every year until 1983, he invited his friend and photographer Hu to take photographs.

Regarded as one of the most talented modern Chinese painters, Zhang was among the earliest artists to recognize photography as an expressive medium and the great influence of camera on modern art and communication. Photographer Hu was a pioneer at the time, who explored the possibility to combine modern photography with traditional ink painting.

The photos on display in the exhibition, seen at first glance, are just like Chinese paintings. To capture the natural “gesture” of the plum blossoms and lotus, he eliminated all distracting elements by inserting blank backdrops behind each of his subjects.

Hu also deliberately left a blank space on each picture for Zhang to inscribe a little poem with his running cursive calligraphy directly on the photo. To make the photography more picturesque, the two artists signed and stamped each one with the seals typically used in Chinese ink painting to remember the cherished friendship.

Most of the flowers in Hu’s lens were shot upward to illustrate the beauty of their varied postures: gnarled, slanting, and sparse. Zhang inscribed, “To paint the form of a plum blossom is to paint its portrait; to convey its personality is to convey its spirit,” to praise Hu’s images for not only depicting the shape of plum blossoms, but more importantly, for capturing its inner spirit.

“He should be considered a great master in our time,” Zhang wrote.

The flower photos Hu shot in the garden marked his first venture into color photography. With Zhang’s inscriptions on every single photo, the two artists were of one mind, connected through a shared aesthetic conception of Chinese literati painting that emphasized poetry, calligraphy and painting in a new medium. 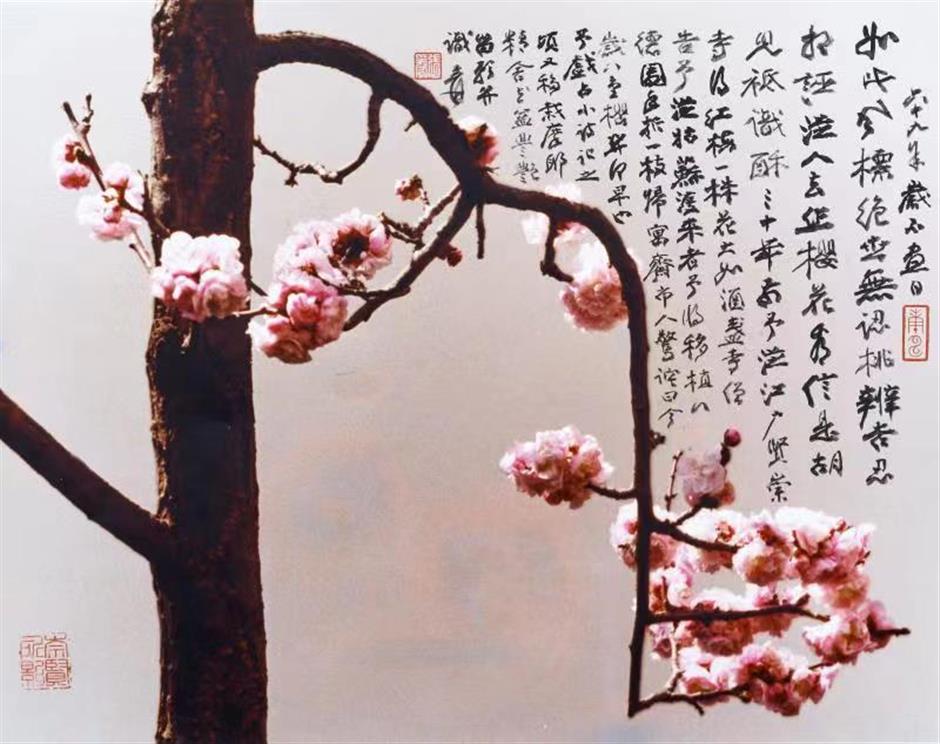