Hupao Park is located on the slope of Daci Hill in the southwest part of Hangzhou. The present-day park was built around Hupao Temple which dates back to the Tang Dynasty (AD 618-907).

The temple has attracted waves of devotees through history by virtue of its picturesque scenery and profound Buddhist culture, including two legendary monks, Ji Gong and Li Shutong. They left their marks in the temple, enriching its fame and relics.

Now, Hangzhou has added a library to this natural and historic landscape.

The library is housed in a building inside the park compound which features upturned eaves, carved wooden windows and painted beams that harmoniously match its surroundings.

More than 7,000 books are stored on the shelves. The venue shares a common borrowing system with Hangzhou Library, so readers can borrow and return books between branches across the city.

In a bid to promote public reading, the library has also cooperated with online education company, NetEase Snail Reading, to build a platform offering a large amount of digital books that are available to readers inside the library. 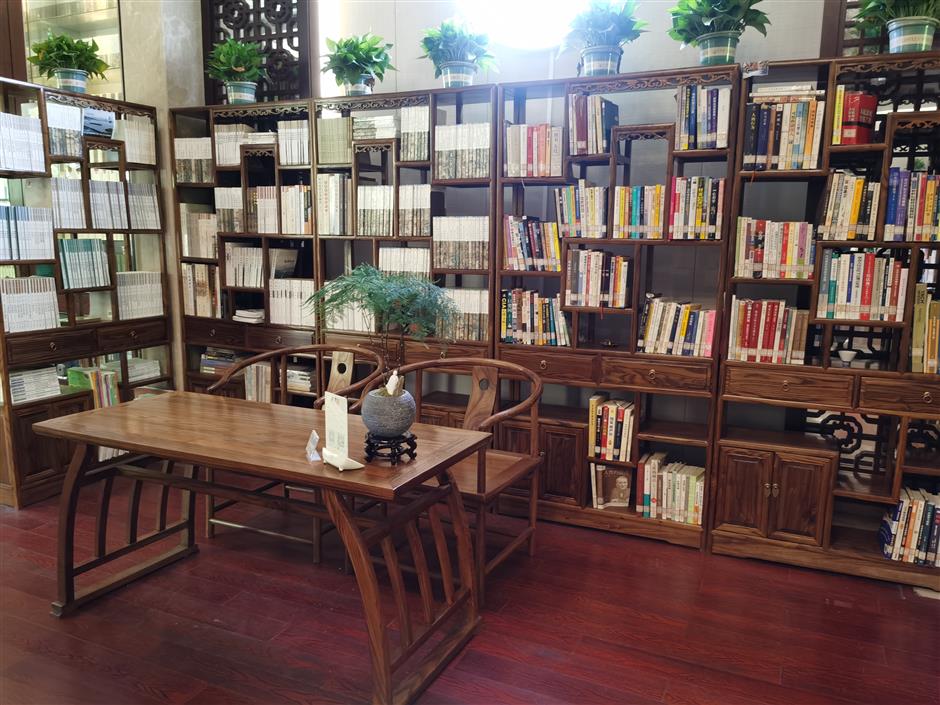 A corner of the newly built Mengquan Shuyuan Library, which has collected more than 7,000 books, in the Hupao Park

Outside the library, visitors can access the one-hour free-reading service every day on the platform.

The library also has a public space for hosting salons. The Song Dynasty Cultural Season is currently underway, with seminars and exhibitions introducing the aesthetics and art of the dynasty.

The library has also carved out an area for readers to taste a cup of tea brewed with the spring. Hupao Spring, literally meaning "tiger spring" in Chinese, is shrouded in legend. During Emperor Xianzong (AD 806-820) of the Tang Dynasty, Hangzhou was affected by a drought.

At the time, an eminent monk traveled to Hangzhou and dreamed about an immortal who told the monk that he would send two tigers to help dig a spring at Daci Hill.

The next day the monk saw two tigers scoop out a hole at the place he dreamed about, and spring water gushed out. Inspired by the dream, the monk established the Hupao Temple on the site.

Today, the Hupao Spring still gurgles. The park allows people to freely take some of the water with them. It is noted for its sweet taste and abundant minerals and goes well with famous Longjing tea.