The 12th Music in the Summer Air (MISA) festival will lower its curtain on Saturday. A total of 22 shows have been staged, under the theme of rebirth, growth and recovery in the post-pandemic era.

As one of Tan's organic trilogies, most of the focus during the performance was the percussive sound effects and traditional Chinese instruments, such as yao (ceramic horn), bianzhong (a set of bronze bells) and dizi (bamboo flute), each of which represents one element of matter that exists on earth.

The performance aims to form a dialogue between China and the West that goes beyond time and space to recall the classics of master Gustav Mahler dating back 110 years. 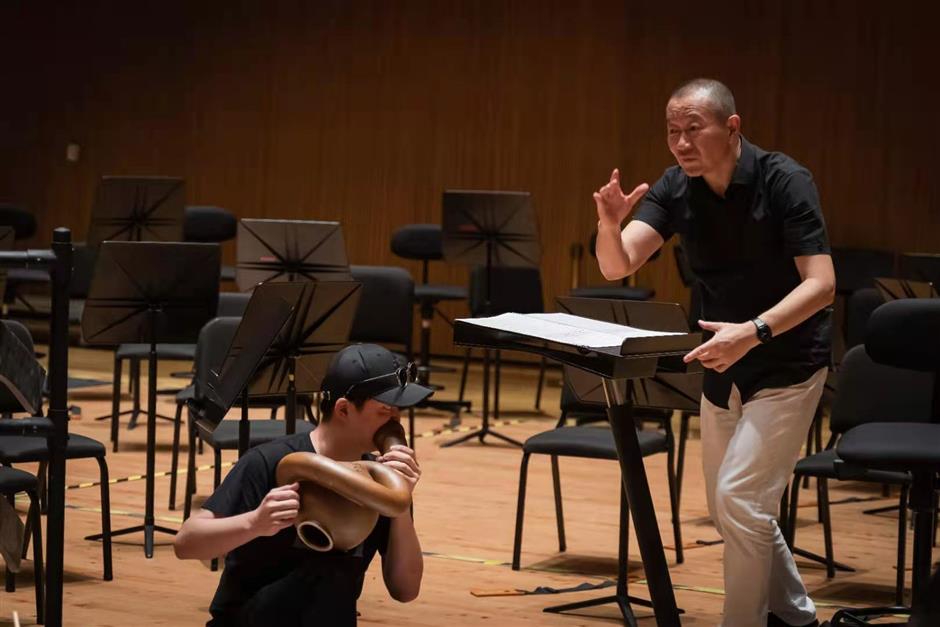 Tan Dun (right) at the rehearsal of  "Earth Concerto"

The closing concert on Saturday night will feature the Cello Concerto No. 1 by Philip Glass and the Piano Concerto No. 2 in B-flat major by Johannes Brahms.

Glass wrote the cello concerto in 2001, which premiered at the 2001 Beijing Music Festival with Lloyd Webber and Yu Long conducting the China Philharmonic. This time, Yu will appear with Chen Yibai, one of the most promising cellists of his generation.

MISA At TRI Future Stars Show, which debuts on Saturday at Blackstone Music Plus across from the Shanghai Symphony Hall, is a stage for up-and-coming musical talent and expected to introduce more young artists to the city's dynamic music scene.

A total of 22 shows have been staged, under the theme of rebirth, growth and recovery in the post-pandemic era.