When artist Chen Junde (1931-2019) implemented his last canvas "Forget-me-not," he surprised viewers with his use of brilliant hues from blossoming petals and warm sunshine, especially given his extremely poor health condition.

"The Art and Literature of Chen Junde: A Painter of Modernity," an exhibition running at Liu Haisu Art Museum through October 7, renders a retrospective view toward this "master of colors."

In 2017, Chen's first solo exhibition was held at the National Art Museum of China in Beijing despite the fact that he was already recognized as one of the best impressionist painters in China. Chen, who was 80 at that time, knew it would be his first, and also the last solo exhibition. However, he didn't give up painting during his remaining days. 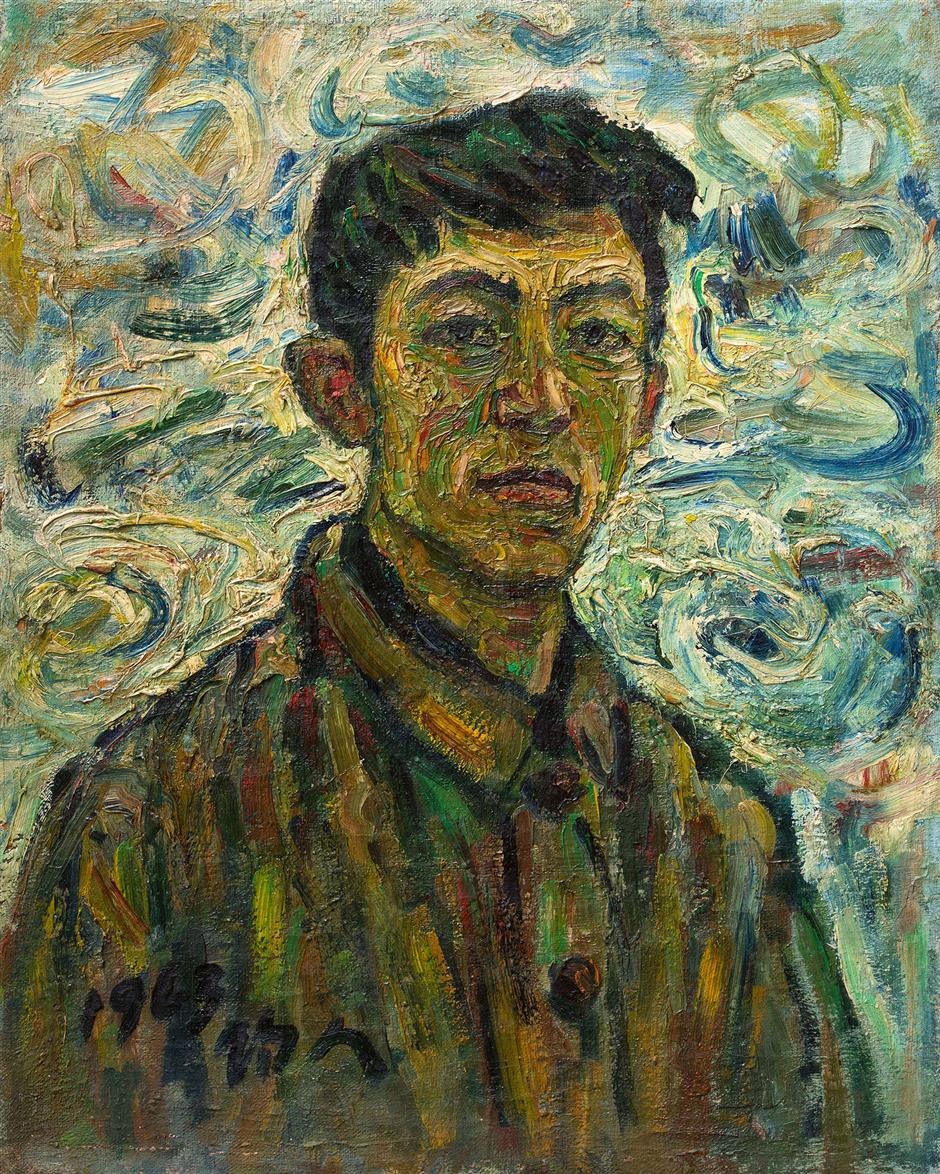 A self-portrait of Chen Junde in 1963

Visitors to the exhibition will find his words written on the back canvas of "Forget-me-not" created in 2018: "What supported a body suffered from serious illness to paint? I asked myself, just the passion for art. Yes, I 'have burnt' my life with art until it is extinguished."

As one of the most important oil painters and educators in China, Chen preferred to keep a low profile and was considered a "reclusive artist."

The exhibition features a cluster of his impressionist paintings from different periods, together with related materials and pictures, giving a panoramic view of the veteran artist.

It is rare that four exhibition halls at Liu Haisu Art Museum are all dedicated to one artist, reflecting Chen's unshakable academic status in the art community.

Born in Shanghai in 1937, Chen graduated from the Shanghai Theater Academy in 1960 and was tutored by Yan Wenliang (1893-1988) and Min Xiwen, 103, both heavyweight names in China's modern art history.

The exhibition not only includes several of his teachers' canvases, but also letters they wrote to him.

It is interesting to find artworks created by both Yan and Chen with the same subject, like "The Bund," but with different styles.

The exhibition introduces the connection between Chen and these masters.

In the 1960s, Chen paid visits to Lin, who resided alone on Nanchang Road. Chen brought oil paintings with him, and Lin told him to paint flexibly and freely. He even broke a plaster figure in front of him to remind the young man that "art should leave imagination for the viewers." Lin once gave Chen a painting, which he unfortunately lost after moving several times.

But viewers can still see Lin's strong influence on Chen's canvas titled "The River in My Hometown" created in 1980, referring to the favorite earth tone Lin would adopt, which might be a special respect for his teacher.

Another highlight is two canvases placed side by side created by Liu and Chen under the same title – "Fuxing Park."

Actually both paintings were created at the same time and venue – at Fuxing Park in 1977. 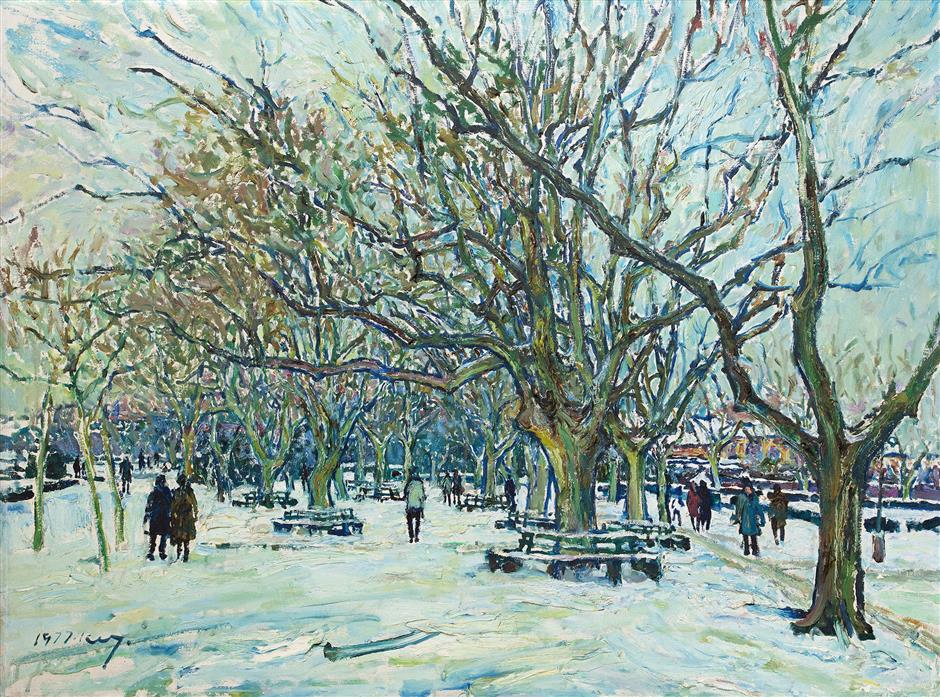 "Fuxing Park after a fresh snow" by Chen Junde, oil on canvas, 1977

Chen once recalled "It was not the painting technique that I learned from these masters, but rather their enthusiasm for art and their moral standing."

Unlike the elders of the art community, Chen came of age when socialist realism was the dominant painting style. While his peers were busy mastering the Russian style, Chen followed his heart, poring over books on impressionism.

He read French literature and coveted impressionist paintings during the dark days of the "cultural revolution" (1966-76).

He believed the saying by Ilya Repin (1844-1930) that no master ever came out of an art academy, so he was totally fed up when his teachers assigned him so many line drawings and portraits. He wondered why they were sticking to the Russian style, since Slavic culture differs so much from Chinese culture.

The romantic world of impressionism captured his imagination with a world filled with light, shadow and softness.

At Vincent van Gogh's house, he had a revelation: "I thought I was familiar with his studio, that sunny, neat room in his paintings. The actual room, however, was dark and dank. It was when I saw the room that I realized van Gogh was painting the sunshine in his heart."

Rich colors and wild lines bring out the weighty qualities under his brush. Whether the flowers, the former French Concession area, or the scene of the southern part of China, the Montmartre and nudes all share a strong and unique art style that only belongs to Chen. 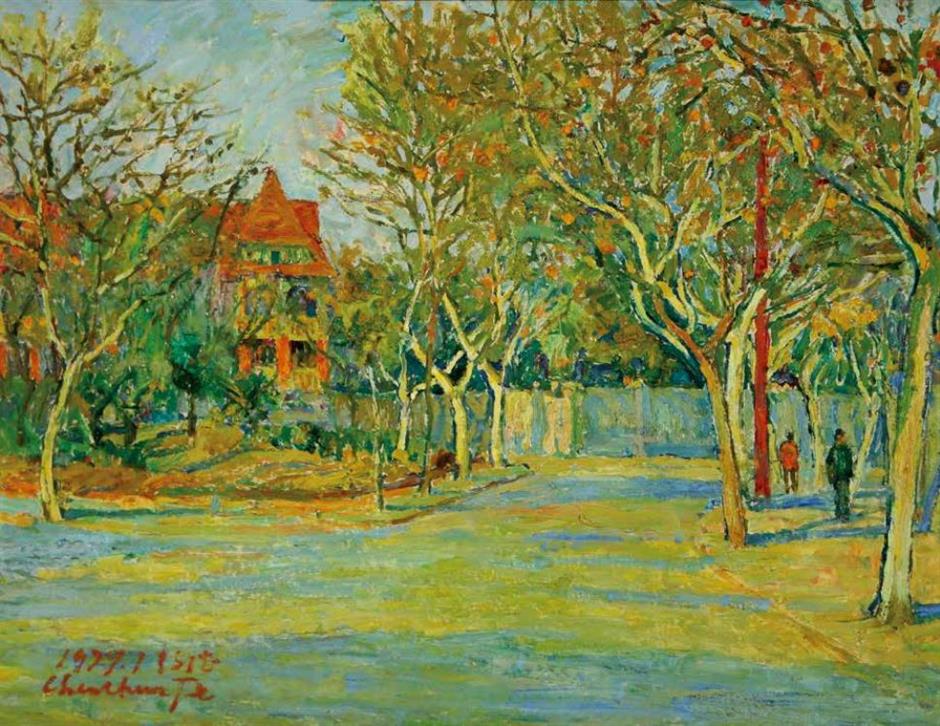 "The street where there used to be a bronze statue of Pushkin" by Chen Junde, oil on canvas, 1977