Traditional instruments and technology co-star in an unusual exhibition

Projected on a wall with a bamboo forest backdrop are the images of knights performing martial arts to the accompaniment of the pipa, a Chinese traditional stringed instrument.

The background music – "Ambush from Ten Sides" and "The King Doffs His Armor" – are two of the best-known pipa masterpieces, inspired by an ancient battle.

This audio-visual treat is part of a rare exhibition featuring traditional Chinese musical instruments and a new creative attempt to embrace technology by the 91-year-old Shanghai Concert Hall. The exhibition opens to public on Friday.

"Many younger people, including those born after the year 2000, really are into traditional culture now, so you find a lot of that theme in exhibitions, but you rarely see one that uses traditional music and instruments as protagonists," said Zhang Zhe, curator of the exhibition.

"We don't want it to be just another exhibition feeding the public knowledge about the instruments," he said. "We want it to be a fun, interactive experience where people can socialize, re-create and share online."

The exhibition is divided into five parts, each featuring a different persona for traditional Chinese music and instruments – literati, knights, beauty, soldiers and philosophers.

Literati focuses on the guqin, a seven-string, plucked instrument traditionally favored by intellectuals for its great sound subtlety and refinement. The interactive section displays replicas of four best-known ancient guqin, each under a multimedia interactive screen.

Each of the four legendary instruments is accompanied by tales in ancient texts, revealing how the instruments were made, who owned them and how they played roles in significant historical events.

For example, the instrument named Jiao Wei, or "burned tail," is said to be made from a piece of burned wood, which gives it a unique sound. 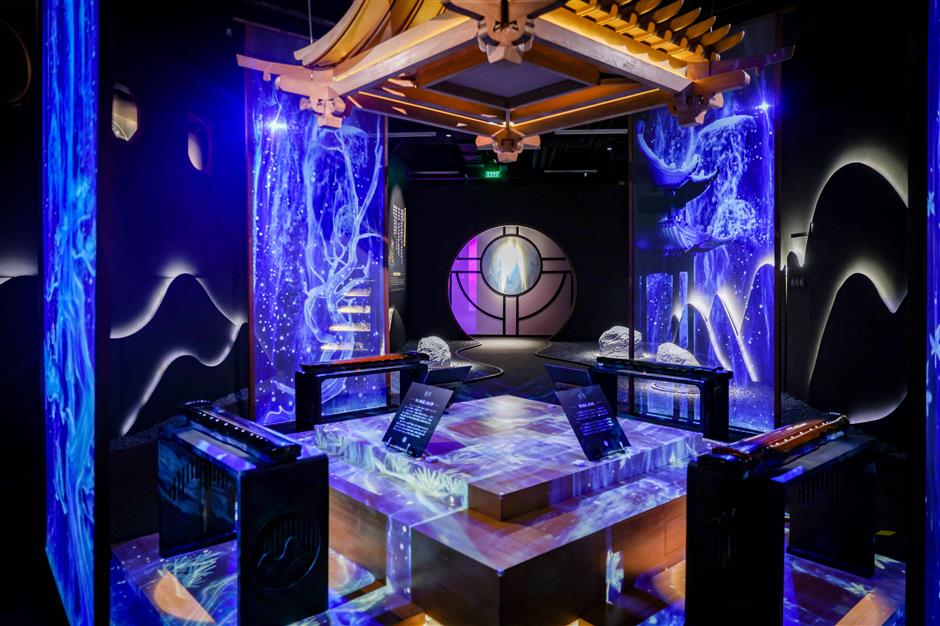 The section on knights features the fluid flute and the pipa. The contrast of the sounds transports visitors into the romantic world of martial arts. The projected wall of a bamboo forest is reminiscent of the film "Crouching Tiger and Hidden Dragon."

The section on beauty switches to a newer version of traditional music common in many of the video games so beloved by the younger generation. Matching the more modern sound is an animated girl who shows up on exhibition poster and gifts. 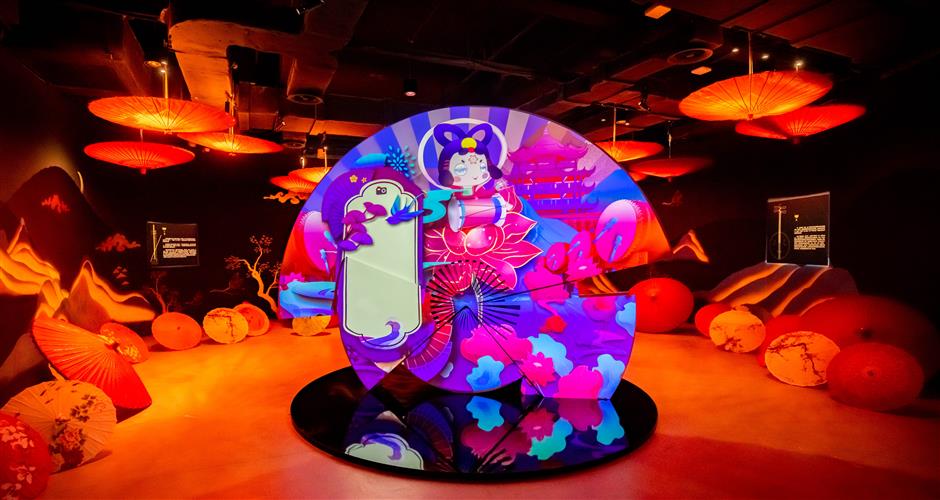 The section on beauty features an animated girl, catering to the younger generation.

The section on soldiers features drums, an instrument often used in ancient battles to motivate soldiers. The philosopher section guides visitors through a narrow corridor filled with basic history and background of traditional Chinese instruments projected on the floor.

Drums, often used in ancient battles to motivate soldiers, are the theme instrument displayed in the soldier section.

In ancient times, music education was de rigueur for an intellectual, so it comes as no surprise that famed philosophers like Confucius left quotes about music. Some of the best of those quotes are projected on a wall as part of the interactive experience in this section.

The immersive exhibition is part of the historic concert hall's program for the new season, which also includes a multimedia concert performed by the Shanghai Chinese Orchestra and a 3D projection mapping show on its iconic wall.