Drawing on his own experiences, He produced the iconic "Big Cake," "Faces" and "Family" series over the past few years, recording the specific moments that were of great importance to the development of a person growing up in the 1980s.

Childhood, birthday parties, good days for hanging out, intimacy, family reunions… As the backdrop in the painting changes, the characters portrayed stay the same. Everyone has a Buddha face – fleshy cheeks, downcast eyes and full lips that turn up at the corners in a hint of a smile. They look as if they have just stepped down from the walls of the ancient Chinese temples and grottoes, only to be donned on the apparels and accessories considered to be fashionable in the modern era. 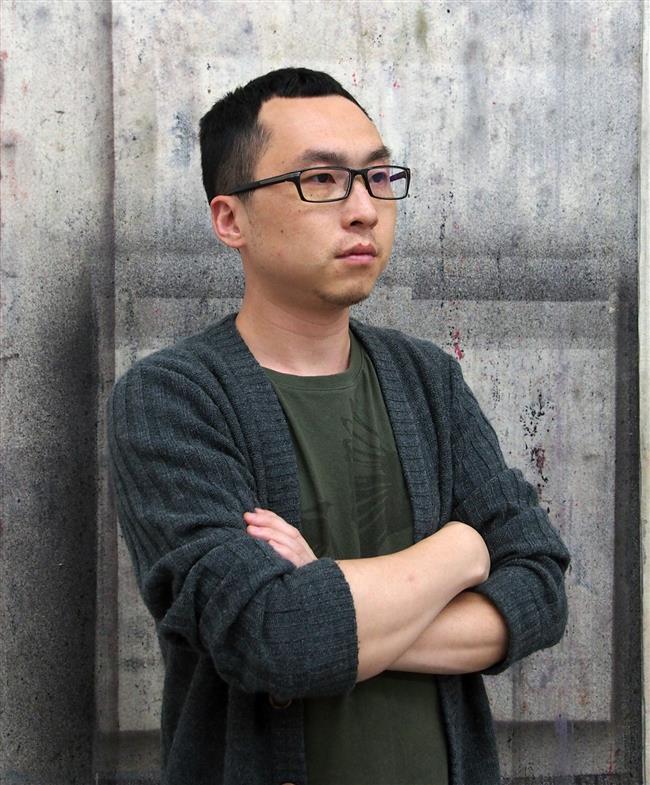 He Jian is a lecturer at the Sichuan Fine Arts Institute's Chinese Painting Department.

"I'd say the face carries the genes of the Chinese people," said He while in Shanghai last week for the show's opening. "No matter how we dress ourselves or behave, we look alike. It can be me, you and us. We are Chinese and we'll always be."

This is also the doctrine in his art practice when confronting the innovation issues of images, techniques, materials and forms under the continuing threat of the ever-changing digital world where technological innovation is supreme.

As an artist who works mainly with ink on paper, He has been perfecting his use of Chinese brush for years by copying the works of masters. He firmly believes the study of traditional Chinese painting is a process in which the painter self-corrects in a state of certainty, in order to inherit traditional skills to the greatest extent possible.

Inspired by the thick lines of the Yongle Palace murals, as well as the mottled texture of the Dunhuang frescoes, He created his earliest "Wedding" series in the 2000s in gongbi-style (meticulous) with traditional goutian (boundary-fill) technique – a careful realist technique in Chinese painting, with a renewed sense of hope, optimism and purpose.

The surreal juxtaposition of the secular settings and Buddha-face characters in his paintings is almost disturbingly comic but harmonious at the same time. They make people ponder and wonder about the nature of selfhood and identity, leading them to think and imagine while feeling a bit nostalgic.

In search of the technique to achieve the "aged effect" in his paintings, he later created the "Pastries" series, using only dark tones to absorb light. When colors dim, lines, layers and shades take center stage.

For He, the experience he accumulated in the process of searching eventually helped him internalize conventional techniques and establish his own artistic language.

"At a time when we no longer have to make costly efforts to find the things we want, the pleasure of looking at a painting comes not so much from the what but the how," said He, 43, who is now a lecturer at the Sichuan Fine Arts Institute's Chinese Painting Department.

I agree, and I am also a bit nostalgic about the past. Though living in the present means keeping up with the times, it is not a bad idea to get disconnected in He's paintings for a moment and be a victim of the time.