It's not easy for a ceramist to launch a solo exhibition, as it may take years to gather quality works from the kiln.

So it is quite surprising to find local artist Chen Liang's "CHINA MEETS CHINA," a ceramics exhibition daunting in size.

The exhibition currently under way at Aurora Museum through December 12 features 100 works selected from 11 ceramic series by Chen over the past two decades.

The English title of the exhibition, "CHINA MEETS CHINA," has double meaning – the name of the country and the clay used in ceramic art share the same English word.

Born in Shanghai in 1976 to an artists family, Chen has studied Chinese ink-water paintings and ceramic making since he was a child. In 2001, he graduated from the Shanghai Academy of Fine Arts of Shanghai University.

Drawing nourishment and inspiration from his father, Chen Jialing, a pioneering figure in the Shanghai ceramic art scene, and other veteran artists who often visited his home, Chen approaches ceramic art, an art form that has been passed down for thousands of years, with a contemporary touch.

"I tried to fuse innovations in both materials and techniques, imbuing new vitality with contemporary aesthetic taste," Chen said.

Unlike other ceramists, he extends his love for ceramics into furniture, tableware and teaware.

When stepping into the exhibition hall, visitors are greeted by a line of vats adorned with big geometric blocks featuring different textures and patterns.

Vats, often with an open top bigger than the flat bottom, were one of the most commonly seen vessels in ancient China. They were usually made of pottery, porcelain, enamel or glass.

However, porcelain vats are the most difficult to make, as the larger the size, the more difficult they are to fire.

It's difficult to imagine how Chen has produced such a large number of porcelain vats.

"Sometimes when the shape is complete, the colors just won't," Chen said with a smile. "It really demands your patience and persistence, as you would never expect the exact colors coming out from the kiln."

Another impressive work at the exhibition is "October," featuring the ceramic pomegranates hanging from the ceiling.

In fact, pomegranate originated in the Balkans and Iran. It was said to be introduced to China by envoy Zhang Qian, who led a delegation there in the reign of Emperor Wu of the Han Dynasty (202 BC-AD 220). Since then, pomegranate has been recognized as a symbol of auspiciousness in China.

"I wanted to grow a ceramic pomegranate tree that would bear all the best wishes," Chen said. 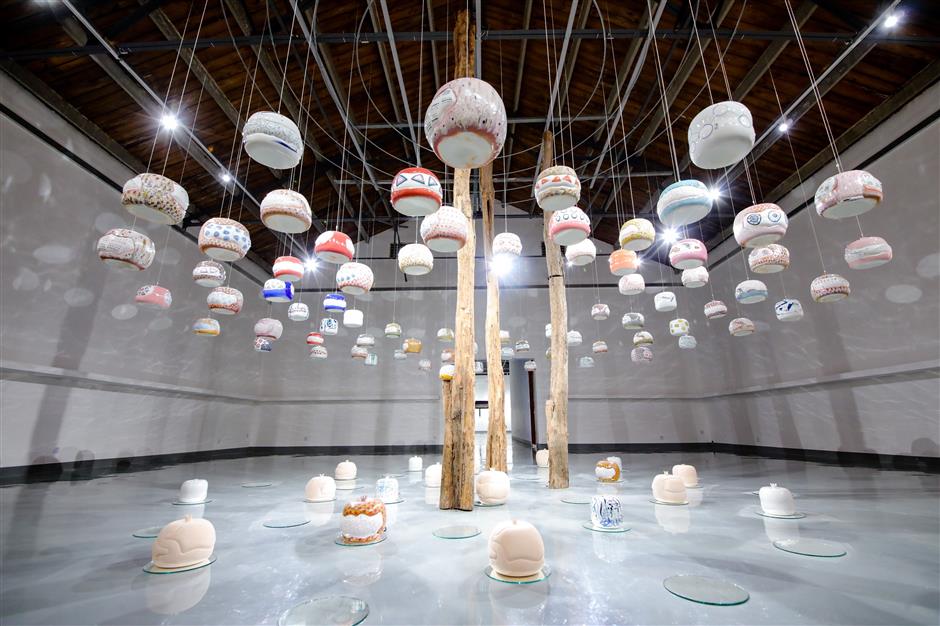