Exploring the royal gardens and palaces through lenses

The Shanghai Museum of Camera and Photography is hosting a photography exhibition about China's imperial gardens and palaces.

The Forbidden City, Summer Palace, Beihai Park, Old Summer Palace, Temple of Heaven, and Imperial Mountain Summer Resort are among the over 100 artworks that depict the architectural magnificence of the country's ancient landmarks.

The exhibition is a portfolio of the project "World Heritage Imagology – Royal Gardens and Palaces," which was started by photographer Mei Sheng and his 20 student researchers. The project is dedicated to world heritage protection, image database construction, and academic exploration of photography art forms. They have been working on it for over two years.

The photos on display not only show the grandeur of royal palaces in a panoramic view, but they also emphasize the architecture's finer elements, such as a bridge sculpture, a window frame, and a door carving.

Fan Bingyuan's photograph "Nanhu Island in Summer Palace" depicts the long, magnificent stone bridge that leads to the island, where many Qing Dynasty (1644-1911) emperors prayed for rain to ensure a good harvest.

The elaborate dougong construction on the roof (a system of brackets inserted between the top of a column and a crossbeam) is depicted in Miao Jindi's art "Cining Palace."

Shanghai is the exhibition's second stop after it premiered at the China Millennium Monument in Beijing last year. It'll go on a national tour after that. 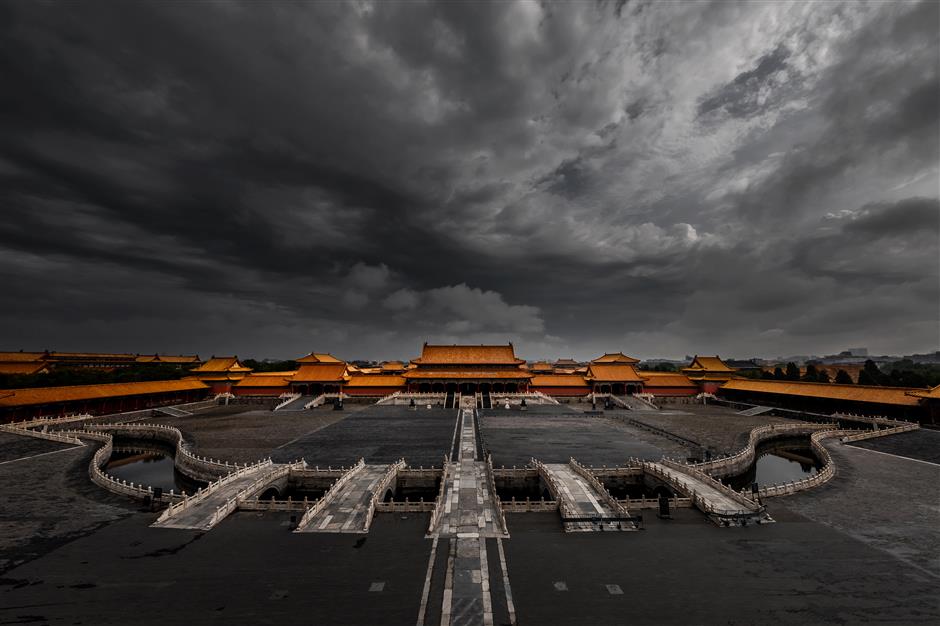 "Gate of Supreme Harmony, the Palace Museum" by Lu Ying