Chinese artist Wu Lewei has won a worldwide competition to design the official poster for the Montreux Jazz Festival China, which will be held in October.

The winning entry, selected by a professional jury and 8,500 public votes, features a bridge formed of a curved stave and musical notes. It symbolizes the connection of music lovers from East to West. 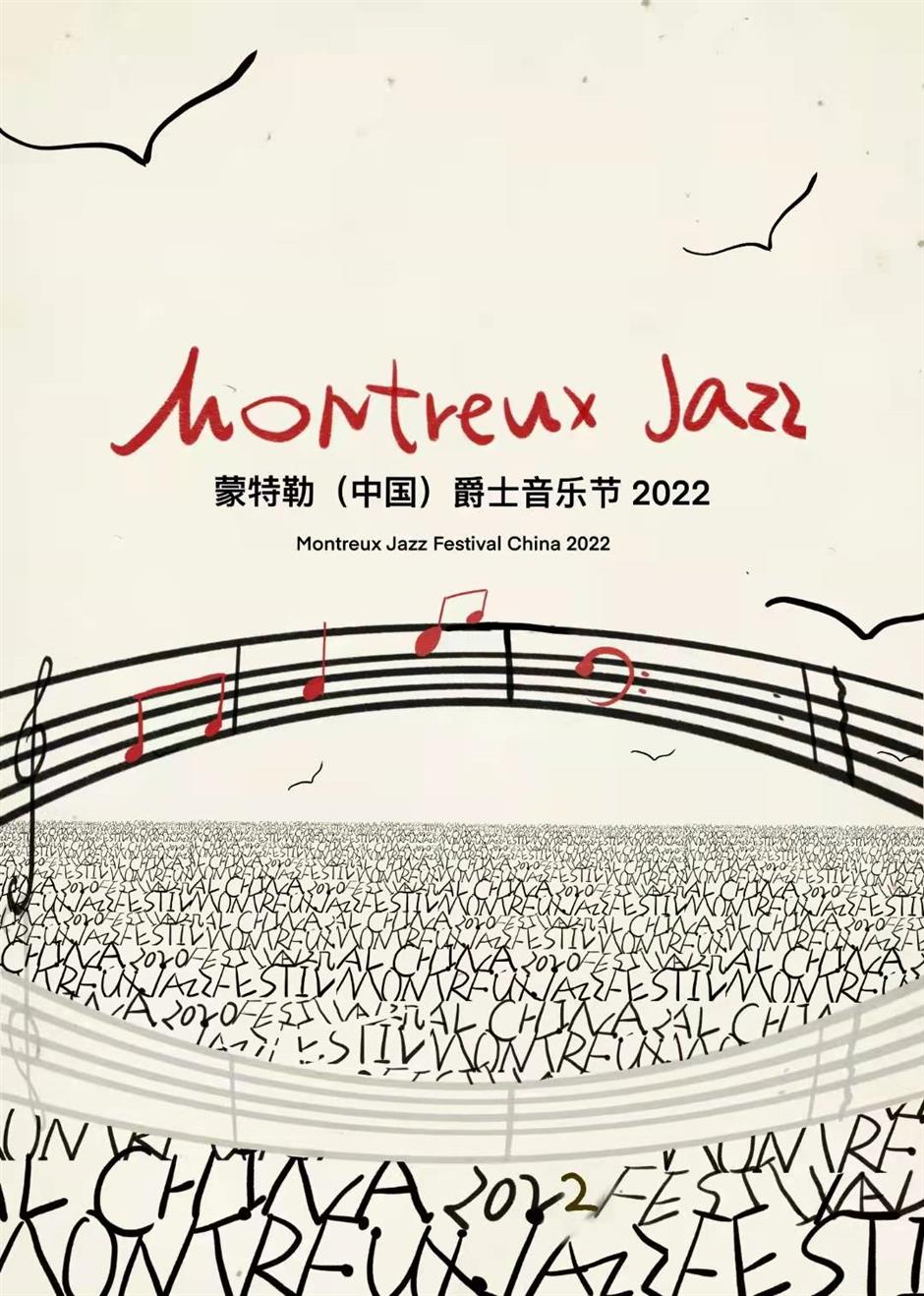 The official poster for this year's Montreux Jazz Festival China

The Chinese event is an offshoot of the renowned Montreux Jazz Festival held every summer on the shores of Lake Geneva in Switzerland. The first Chinese edition was held last year in Hangzhou, capital of Zhejiang Province and a city also famed for its lake.

Specially designed posters have been part of the heritage and tradition of the festival. Since 1967, the festival has entrusted the creation of its official poster to Swiss and international artists.

Over the years, many international artists have given form to their very personal visions for the festival's poster design. Keith Haring produced a trio of posters in 1983, then teamed up with Andy Warhol for another in 1986. David Bowie produced a poster in 1995, and more recently Yoann Lemoine – also known as Woodkid – and Malika Favre have done the same. 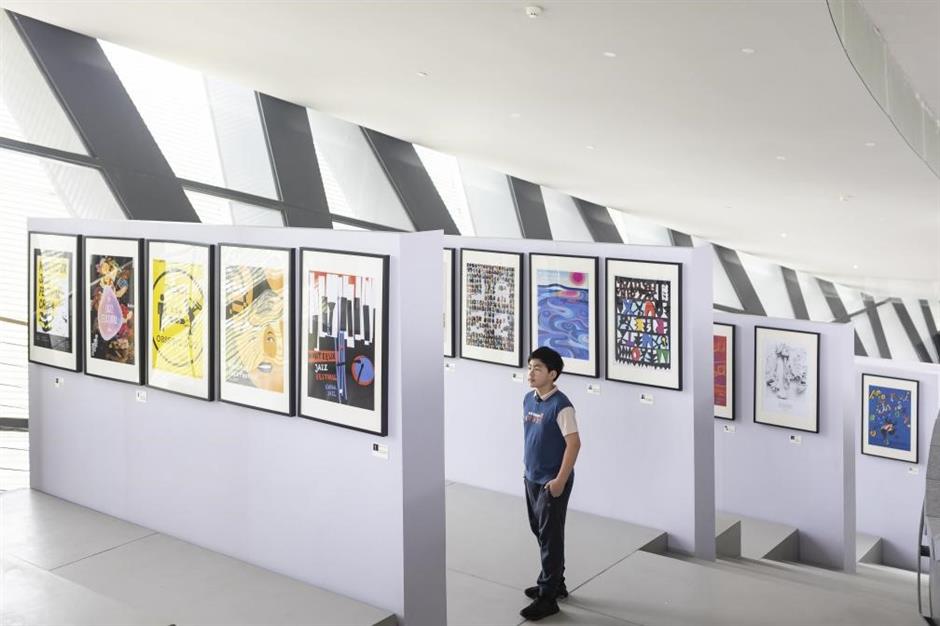 The top 30 posters of this year's design competition are currently displayed at the Grand Canal Music Park in Hangzhou, capital of Zhejiang Province.

The poster design competition organized for this year's China festival had "bridge" as its theme. The organizers received 162 entries from 16 countries, including China, Switzerland, Italy, Poland, France and Nigeria.

A seven-member jury pared the competitors down to 20 and put their designs up to a public vote.

"Notes and beats are bridges that link musicians and audiences, and people from varied backgrounds," said Qi. "We brought the Montreux Jazz Festival to China, which is like building a bridge from Lake Geneva to Hangzhou's West Lake."

Winner designer Wu is a graphic designer who specializes in visual communication designs.

According to Wu, the poster uses the color texture of a musical score to create a warm yellow tone. In the middle, the musical notation on the stave "bridge" changes from treble to bass clef – symbolizing the full gamut of musical expression.

Below the bridge, English letters repeating "Montreux Jazz Festival China 2022" form a pool of people, reflecting the lively atmosphere and happy feeling of the event. Red and black fill the poster, reflecting pureness and enthusiasm, and suggesting a mix of serious Eastern music and passionate Western jazz. 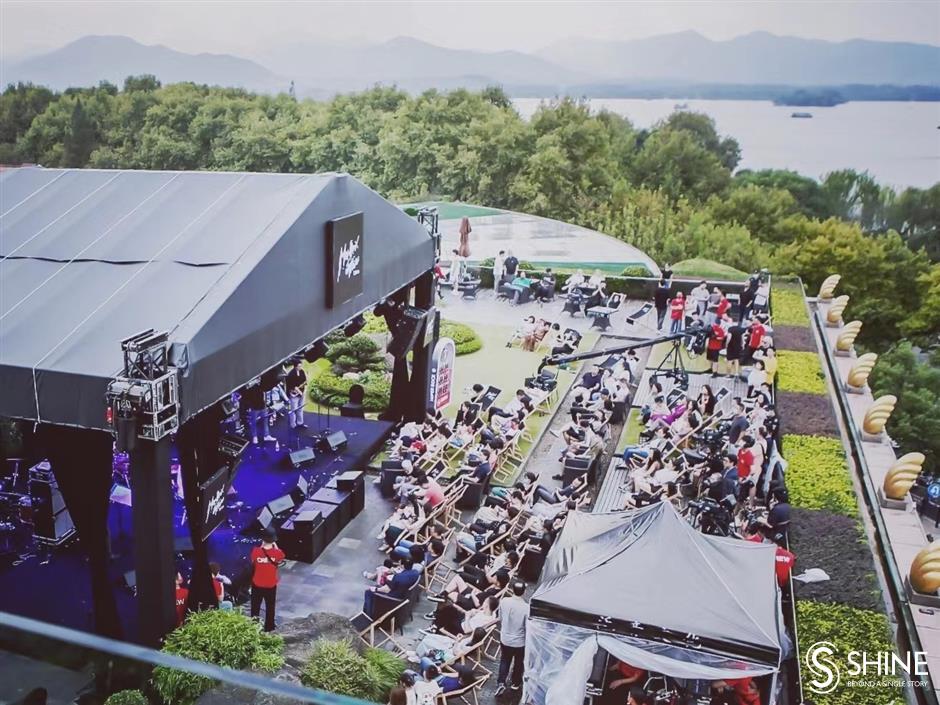 "The poster conveys a feeling of warmth and peace in uncertain times, using music as a cultural bridge to bring people together in a celebration of life and love," said Qi.

According to jury member Viviane Rychner, who is also the secretary-general of the Montreux Jazz Artists Foundation, the jury had no precise "expectation" of the competition outcome because beauty and tastes in art are completely subjective.

"The winner poster has something universal by putting musical references in a physical medium," Rychner told Shanghai Daily. "Some elements can speak to Western people; some to Eastern people. The bridge can be interpreted as a link between people and music, and between Chinese people and Westerners." 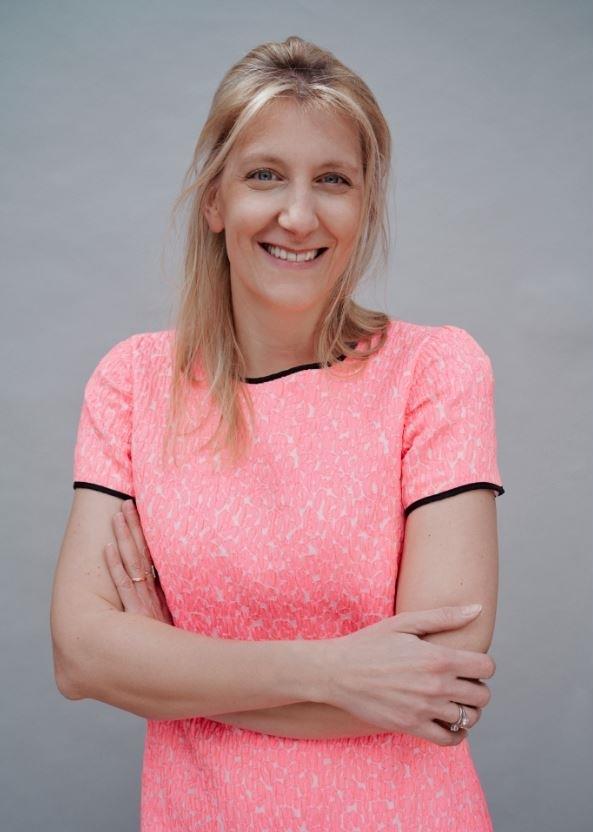 Rychner said posters help promote the jazz festival and its culture. For her, a good poster exhibits originality and creativity, but also artistic skill and technique.

"Originality and creativity are required to nurture the differentiation, and the quality of the poster depends on the technical realization of the design work," she said.

The 2022 Montreux Jazz Festival China in October may introduce a new format – a multi-city roadshow, according to organizers.

The top 30 posters of this year's design competition are currently on exhibit at Hangzhou's Grand Canal Music Park. 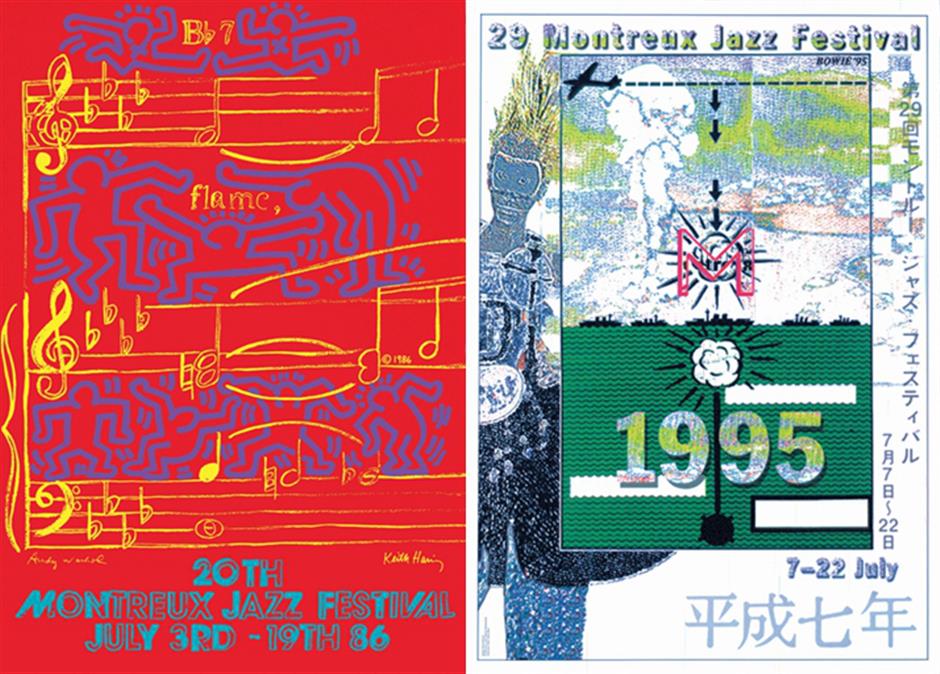 The 1986 poster (left) by Keith Haring and Andy Warhol, and the 1995 poster by David Bowie

Since jazz is considered an inclusive, open music genre, jazz festivals are not musically exclusive. At the Montreux Jazz Festival China last year, about half of the performers were jazz musicians, while the rest were rock, folk, classical and a cappella artists.

The playbill for this year's event hasn't been announced yet.

At last year's Montreux Jazz Festival China, about half of the performers were jazz musicians.

Although many foreigners may not associate China closely with jazz, the genre has a long history in the country.

Jazz clubs were popular entertainment venues in Shanghai back in the 1930s and 40s. Today, jazz remains a niche market in China, a symbol of leisure and stylish living for the modern generation.

Most jazz performers and fans are in large cities like Shanghai, Beijing and Guangzhou.

"Jazz is tasteful compared to pop," she said. "It creates a leisure, relaxed atmosphere. If Montreux Jazz Festival China is planning a roadshow in Shanghai this year, I'm surely interested."

Some posters from previous editions of the Montreux Jazz Festival 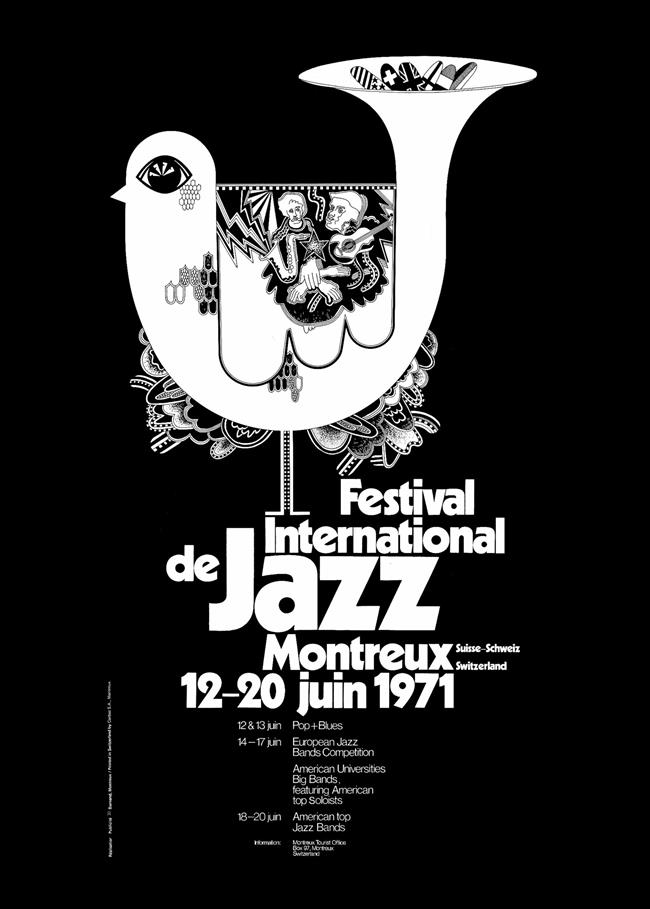 The 1971 poster from Bruno Gaeng seems a bit simple and naïve, but when you look at it, you see the bird is also a saxophone and discover that in the wings of the bird, Frank Zappa and Freddy Below are represented. 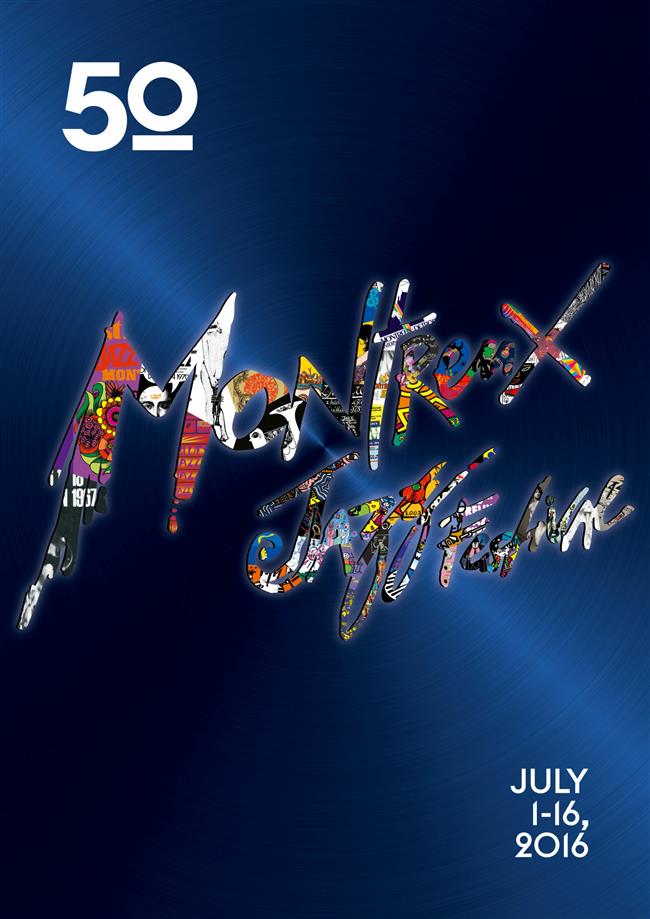 This poster is a beautiful tribute to the design and artistic heritage of the Montreux Jazz Festival and to all artists who were part of it. I love the fact that the logo is the main subject of the poster but also the fact this is the only one poster on which the logo appears. Lastly, I like the vinyl texture backdrop.

I really like how the artist played with the concept of tradition integrating music elements and instrument patterns in the ceramic craft. This is an original way to say something about tradition and heritage, something also very important in the Montreux Jazz Festival DNA. With the "play," "pause" and "forward," a lot of interpretations are possible: a reference to our contemporary world, to a music medium, to the fact that time flies or to how music creates links between the past, the present and the future.