Noyan from Turkey and stories from his 35 years in China

About 35 years ago, a young Turkish man came to Beijing to learn Chinese and then went to Wuhan University for his Masters, finally becoming the first Turk to receive a masters degree on China’s mainland.

Then in 1996, he came to Shanghai and has been here ever since.

His name is Noyan Rona, one of the most famous Turks in Shanghai, who is even easily recognized by local taxi drivers.

“Maybe I acted in too many TV series,” easygoing Noyan laughed. The 61-year-old man showed a heartfelt smile just like a kid on Christmas Eve.

Besides his job, Noyan has tried many interesting things during his years in China. He has played numerous roles in popular TV series and films, taken part in the first Chinese competition for foreigners run by CCTV and won third prize, and volunteered in his community for many years.

When Mr. Noyan is strict and serious, he looks just like a banker or an official, but when he smiles he suddenly becomes a lovely and amiable grandpa who is easy to approach.

Before we left after the interview, the Turkish grandpa gave us a touching gift — some books written by Ferit Orhan Pamuk, a well known Turkish writer, which shows Noyan is still deeply in love with his country. 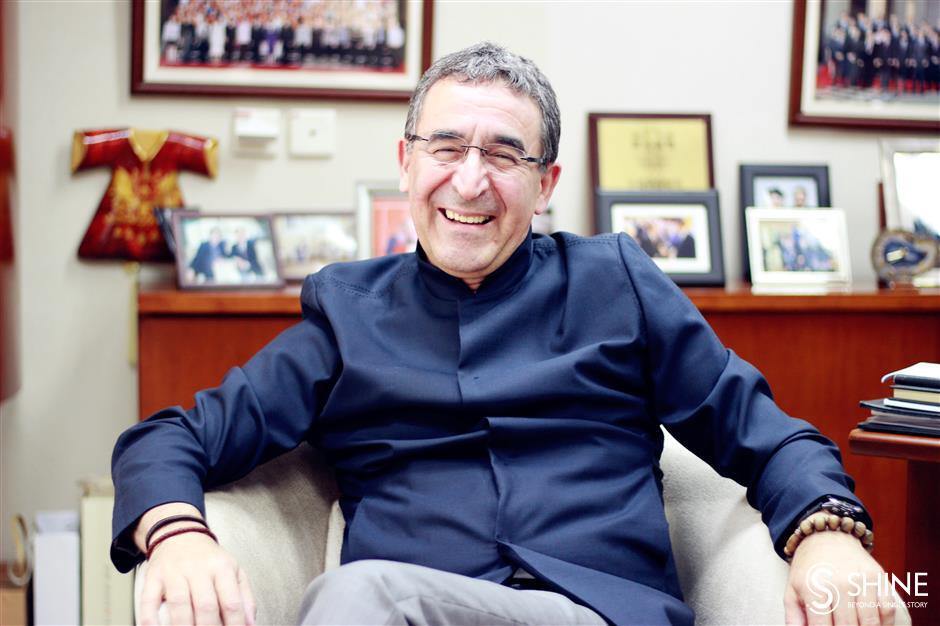 Noyan sits smiling in his office, which is decorated with lots of Chinese characters.

Holin: You have been here for more than 20 years! Do you still remember the reason you came here? And then why you decided to live here for a long time?

Noyan: It was 1996, when the Turkish government sent me here to establish the Shanghai Consulate of Turkey, so I came to Shanghai for work.

After three years working there, I started to work in one of the biggest Turkish banks in Shanghai over these 16, 17 years — that is why I am living in Shanghai.

Apart from my job, it is a good opportunity for me to improve myself, and improve my language, and my understanding of China. And the other reason is I can get closer to Chinese people as a banker. To be a banker, you will have a lot of opportunities to be part of Shanghai's local community. This is the most important reason.

I like Shanghai. And also that time, the 1990s, Shanghai was not a very popular destination for foreigners.

Holin: Which place was the most popular destination for foreigners in the 1990s?

Noyan: Beijing and Guangzhou were more popular than Shanghai. If you came from Beijing to Shanghai that time, you felt that Shanghai was not good as Beijing for sure. Beijing was a powerful city at that time, and because of “gai ge kai fang (reform and opening up),” everything happened first in Beijing, that was why there were more foreigners there.

And Guangzhou had more foreigners there because of the Hong Kong connection.

Holin: So what made you begin to think Shanghai is was good destination for you, maybe better than Beijing?

Noyan: After six months I felt that Shanghai was good. I saw the potential, and the open-minded, quick-thinking people here. Another reason was that when I was in Shanghai the first time, I already had 13 years' experience in China.

I had a master degree from Wuhan University, so I didn't have language problems, so for me, six-months was enough.

Foreign student Noyan stands in Tian'anmen Square in 1983. Noyan went to Beijing Language and Culture University that year to further study Chinese after he graduated.

Noyan: Yes, I speak Chinese more than English. Chinese is more natural for me.

Holin: Sorry I'm making you use your third language to do this interview! Can you share the moment you first came to Shanghai, if you still remember?

Noyan: The first time I came to Shanghai was 1991. That was a short working journey to Shanghai. I stayed here for one week, and I went back to Beijing. That time I was working at the Embassy.

Holin: Can you talk about the biggest difference between that time and now?

Noyan: When I first arrived in Shanghai, you could’t hear Mandarin. People were always talking in Shanghainese. And now when you go to the street, you can’t hear Shanghainese. This is very obvious. This is because more and more people from all over the world are coming to Shanghai. I can speak Shanghainese, too!

Holin: You must have plenty of interesting stories related with Shanghai! Can you share some?

Noyan: I have many stories.

You may know that there are about 60,000 taxis in Shanghai, and I use taxis very often. Once I got a taxi, and I asked him to go back home, and then I told him which road he had to take.

But when I told him the address, he replied, "Mr Noyan, I know your address."

He recognized me, and he told me he met me three years before. I had taken his taxi, and we were talking, and he knew where I came from, and what I do, where I live. After that, he also watched me on TV, and that was why he remembered me.

I felt very surprised, you know, there is a very small possibility you can get the same taxi here no matter how long you have stayed here.

I have many taxi stories.

Holin: What kind of TV series made you so famous here?

Holin: You are so busy in China! How do you spend your weekends here nowadays?

Noyan: Many weekends I work, our “ju wei hui (community)” and “jie dao (subdistrict)” have some activities, sometimes doing some volunteering work at senior houses or the blood center.

Apart from that, I will do some household job or repair work, like fixing my car, washing my car. I also go shopping or viewing the exhibitions sometimes.

If the weather is good, I will drive to somewhere near here (Lujiazui area) to spend the weekend.

Holin: Which place in Shanghai do you like best and why?

Noyan: I like Lujiazui area, it is good for walking, shopping, eating and entertaining. It is very good with many choices. It is very modern, everything is very new, it is very attractive for foreigners and for me.

Also, I like some parts on the Puxi side, the old city, very unique, like Huashan Road, Hengshan Road, Yongkang Road, or Fuxing Road. And I also like the new parts of the city, like Hongqiao, Gubei, or some parts of Xianxia Road.

Holin: You have mentioned many roads, but which road do you like best?

Noyan: For driving, the Bund on the Puxi side is very good. And the Middle Ring Line, the highway, is also good for driving.

I like Wulumuqi Road for walking. And some parts of Sichuan Road and Fuzhou Road, the main street of Huaihai Road, and Nanjing Road are good for walking and looking. And I like the west side of Nanjing Road, the east side is very crowded.

Maoming Road is also very good, if you see the very narrow roads, like Nanchang Road.

Holin: You are really familiar with Shanghai. So, what do you love about this city?

Noyan: You have many choices for whatever you want. It provides everything that you need, shopping, eating, walking, everything. And recently, it's sped up a lot. It is always developing, so every day something new comes up. It is very lively, you will feel you are getting younger and younger.

Holin: So, there must be something you hate here, too? And do you have any suggestions to change it or make it better?

Noyan: Shanghai’s hardware is very nice and advanced, if you compare it with other cities in the world, especially the big cities. But some places are dirty; some people don't have the attention to make the city clean. Even in cars, or on the traffic, they just throw out the garbage, paper or cigarette butts and everything, this is bad.

The other thing is social order. If more than one person needs something at the same time, you have to get in the line, right? But they don't do it. This is not good.

And if you ask me one word that Shanghai lacks or needs to improve, I would say “respect” — respect each other; respect everyone, and you will get respect back. It happens everywhere. In the theater, people always sit in other people's seats, they don't sit at their own number.

Shanghai is every day receiving many people from outside, right? They find a job and they stay here. But how do you improve their culture? You have to create, keep, and improve Shanghai culture, and don't allow other people to destroy it.

Holin: Compared to your country, are there any shortages in Shanghai? Any solutions for Shanghai to borrow from?

Noyan: Yes, you can't say they're shortages, you could say differences. In Shanghai, as a consumer, you can find very high-end and very low-end things, but you can't find something in the middle easily. Shanghai needs to improve this kind of thing, like a restaurant, not luxury, not so expensive, nice and clean for food or service, for example.

Holin: Do you have some impressed memories during your life?

Noyan: Of course, I have many impressed memories.

Altogether 18 foreigners were left for the final. They shot the final on TV, and at that time, there were no other TV stations, only CCTV. It took me nearly 15 hours at the TV station to take the exam. It is very impressive, so tiring, but so unique for me. 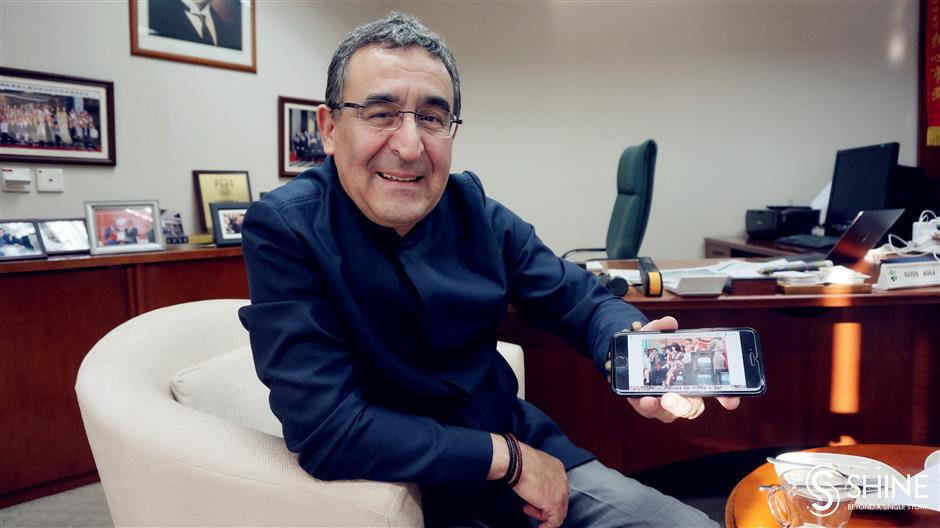 Noyan shows the picture he took when he was taking part in the first Chinese competition for foreigners run by CCTV in 1992.

What does Noyan want to say to himself in the future? Have a look! Noyan is sending a message to himself 10 years from now!