A keyboard, a bass, a drum kit and a guitar with a trunk shuttled back and forth past some iconic Shanghai spots — it's a fancy but natural music video for a German song with Chinese lyrics which was created by several German old boys — JK & the Troubleshooters.

JK, the vocalist in the band, was my interviewee Jochen Klein.

About 14 years ago, just after a business trip, middle-aged Jochen immediately decided to quit his job in Germany and pack up before fleeing to Shanghai, an energetic and dynamic city he fell in love with at first sight.

Besides the band and their Chinese songs, the free man also did another amazing thing here: he wrote a Shanghai guide book in German.

“Hundreds of hours' work for very little money," he told me. "But the city deserved to be known better by the Germans.”

But now, the 57-year-old German with a head of golden hair confessed he never imagined he would be a father when he arrived here. The city gave him the most amazing treasure in his life — a family with a Chinese wife and their ten-month-old baby girl.

Enjoy the German song with Chinese lyrics "I just want to be with you (只想在你身边)" by JK & the Troubleshooters. Jochen's wife also helped out by adapting the lyrics.

Shot by Wang Haoling and Zheng Qiong. Edited by Zhong Youyang and Zhou Shengjie. Special thanks to Andy Boreham. 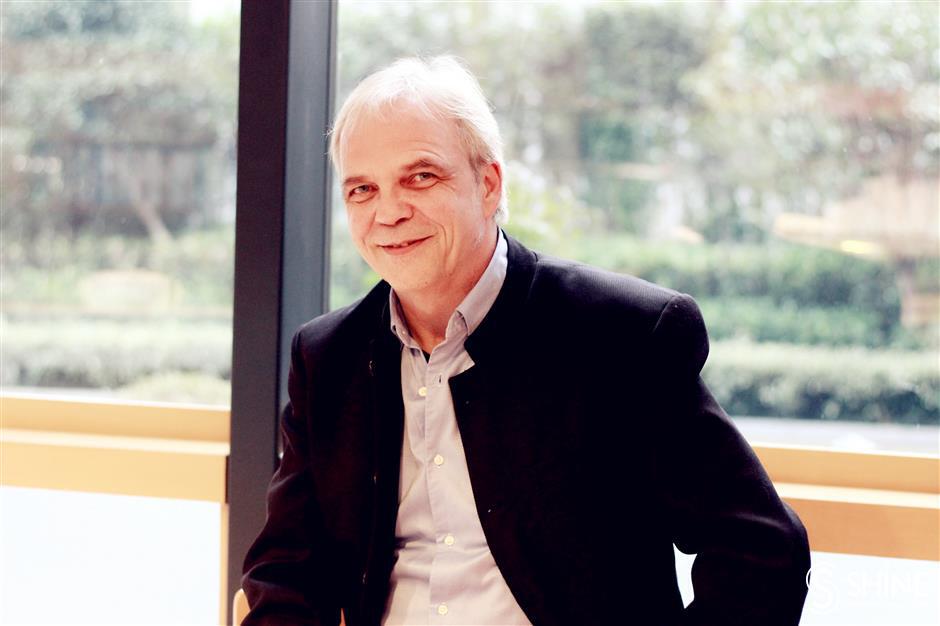 Holin: Hi Jochen, you said you have a Chinese name “You Heng (优衡).” Can you tell me how you got that special name?

Jochen: When I was here for the first time, I stayed in Shanghai for 14 days. I was here with some students from the German Association of Engineers. That time I was working as an editor for a German Weekly and they asked me to report from the World Engineering Congress. So I traveled along with students. One of them was Chinese, Shanghainese, who studied in Germany, and because of him, I met several people here, so I had some connections.

That was 2004, 14 years ago. That was my first travel to Asia. And I was quiet impressed about the city, about the people, about everything. You know, in Germany already at that time, nothing moved any longer, everything was just stable. So when I came here, oh my god, there was movement in life, it is interesting.

After the 14 days, I went back to Germany. And I thought I needed a one-year holiday, and I wanted to go to China. So in October 2005, I just took two pieces of luggage, and I moved to China.

Half a year later, I had two jobs: one was with Bayer Technology Services, and I did the communications for them, and the other one was for German school.

After one and a half years, I quit the job with Bayer, and became the head of communication for the German school.

And from that time, this 14-day stay and those people I met, some of them really became friends. So we stuck together and then they told me “you need a Chinese name.” You know usually, as a foreigner, the Chinese name you get here is just meaningless. But they wanted me to have a name with meaning, and then we were sitting in the living room with four people, and they discussed, and were searching books and stuff like that, drinking some wine. After a few hours, they came up with the name “You Heng, which sounds a little bit similar to the pronunciation to my German name.”

Holin: Do you remember the moment you first came to Shanghai in 2004?

For the first three days, I was walking around like a drunken monkey, all my senses totally overloaded. I smelt things I never smelt before, and I saw things I never saw before. And I heard a lot of noises I never heard before. It was amazing.

Holin: What made you decide to stay here for such a long time?

Jochen: It is exciting to be here and it is an amazing city to live. A lot of things are going on here. I think one reason why I stayed here was... of course it is different culture, so you can learn a lot. But the main point is, I get to learn about myself. I learn something about myself all the time.

Jochen: It is easy. If you just realize that here the culture is different to mine, so people are different, too. Why are they different? What I realized is, if I had been socialized in China, I would be a different person. At least part of us is how we are socialized. I think that is amazing, so I learnt a little bit about myself, also.

Holin: Do you have any impressive Shanghai story?

Jochen: I'm always curious. For me, there was no culture shock. What impressed me was that just almost everything is different... For example, I realized eating is not just about food here, it really sticks people together which is the culture here. That is different from Germany.

And the most impressive story is my wife. I met her in Bayer. She is of course an additional reason for me to stay here. She studied biology, but she was always interested in German culture, nobody knows why. Before I met her, I couldn't imagine being a father. My life was filled with work. As a father, you usually go out in the morning and come back home in the evening. But you want to see your baby growing up. Now I am working part time, partly from home, being able to spend more quality time with my daughter. It is beautiful to see her, my daughter, every day.

Holin: Yes, it's definitely a different experience with children. How do you spend your weekends in Shanghai?

Jochen: It depends on how the working week goes. If you work 16 hours, you just want to sleep. But in general, if the weather is fine, I like to go outside for a walk, to watch people dancing and playing, to see the city breathing. Of course, meeting friends.

And you see, I also spent time doing a travel guidebook — a German one — for Shanghai. 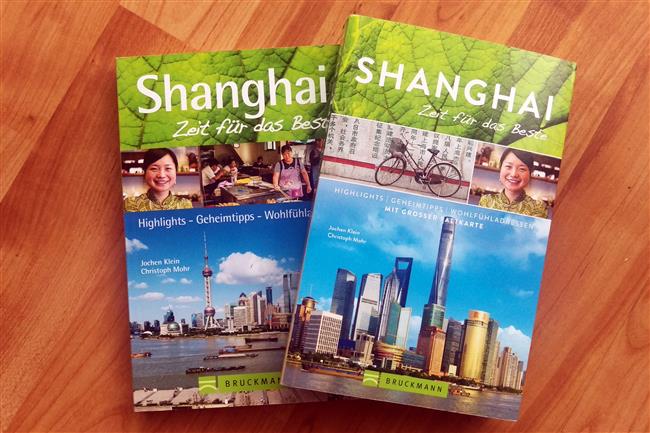 A Shanghai guidebook in German that Jochen created. The second edition (right) was released to the public this April.

Holin: How did you get the idea to write this guide?

Jochen: I had the idea, but I probably wouldn't have done it. The publisher contacted me and asked me if I could do it within six months, but I had a job at that time and I couldn't do it in such a short time. I asked them to give me ten months.

So I spent a lot of time researching, and visiting a lot of places. It was published in 2015, and now I am working on a new edition and making some new changes. (The second edition has since been released this April.)

Holin: As an expert of touring around Shanghai, which places in Shanghai do you like best? And why?

Jochen: If I had to recommend places to someone who's coming to Shanghai for the first time, I would say you have to see the Bund with the Pudong side, you can see the past and the future.

If you can stay here for some time, you have to go to parks, like Zhongshan Park, Fuxing Park. There are a lot of beautiful parks here and you learn a lot about the city. And I will recommend people go the Chinese restaurants, not very stylish ones, just usual ones to learn about Chinese food which is beautiful.

For me, I like the places where I could sit outside, to have coffee or something. And I like Qingpu for example, because it is more Chinese. I'm interested in Chinese life and culture and the more far away you go from downtown, the more you will see the Chinese life.

(The next day of interview, Jochen messaged me via WeChat and added: I thought it over and still could not tell you the one place I like most in Shanghai. So here are three apart from my home of course: The Riverside Avenue, it’s nice to sit at the water front close to Binjiang Park in Pudong; the Xilin Temple in Songjiang; and Wusong Paotaiwan Wetland Forest Park in Baoshan.)

Jochen: Duolun Road. It is kind of old and also modern. It is surrounded by usual Chinese life. And also Anfu Road, Fenyang Road and Meichuan Pedestrain Road. Like Meichuan Road, you can see Chinese daily life there, it is nice. I like it there.

Holin: What makes you love Shanghai?

Jochen: The fast dynamic of Shanghai, I think most of the foreigners will say that. I love changes; I love movement. Stopping means dying. The dynamic has pros and cons, sometimes it is very hard to deal with, but the pros outweigh the cons, because everything is changing. There is always something new, and you can see some progress. The city and the country are developing.

Holin: And the opposite question is what element do you hate here?

Jochen: I don't hate anything. The city is honest. This city is not pretending to be something. But that might change in the future, because the city is trying to become just one of the big megacities worldwide which are all the same, that will be a pity.

Sometimes the air is bad, but we all know it is a huge city, so the air is not as good as the forest. Of course it could get better, I know the government is working on that.

The traffic I don't like. I don't drive, but I ride a motorbike sometimes. The behavior of a lot of people in traffic here has to be changed. Of course, it is getting better now, and we need to put pressure on the people... to make it better for everyone. 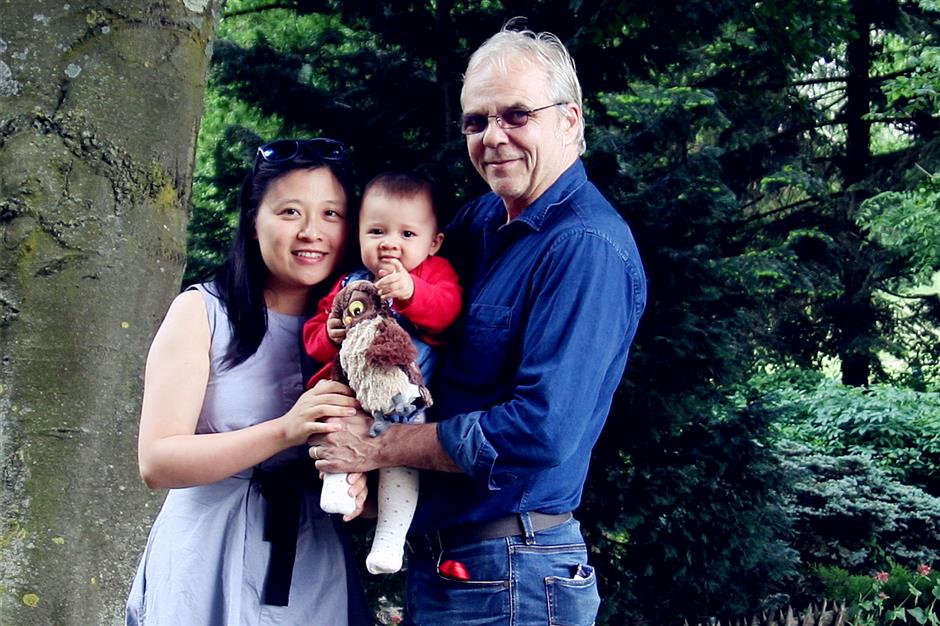 Holin: Any impressive memory during your life?

Jochen: There are a lot of memories, but the most impressive memory I have now is about my daughter, who was just born in July 2017. That is the most impressive thing that's happened to me, because 20 or 30 years ago, if you asked me would you have a child, I would say, “No! No way.” Maybe because I was too busy with myself, I didn't feel I could take care of a child.

Holin: What changes you?

Jochen: A lot of things changed. You will feel a little bit more peaceful and get more even-tempered when you become older. I just learned a lot over the past 20 years that everything will be fine, if it is not fine at the end, it means it is not the end.

We planned to have a kid, a daughter. It was just the right time. I am happy seeing her changes every day, and she is growing up so fast. My world has changed because of her. That is the most beautiful gift for me.

What does Jochen want to say to himself in the future? Have a look! Jochen is sending a message to himself 10 years from now!