An all-rounder in the tools of cricket rearing

When shopkeeper Bai Zixiao talks about cricket equipment, he isn’t referring to bats, balls and wickets. His specialty is the ancient Chinese pastime of keeping the insects as pets or for cricket fighting.

It’s a bit of an odd vocation for a man who graduated with a bachelor’s degree in business administration from an Australian university in 2013. He tried his hand at selling walnut products for a time but gave that up to pursue his true interest.

“All my friends either started their own companies or work in banks,” he says. “Former classmates visit me and ask, ‘Xiao Bai, why are you doing this’?”

Bai can point to a long history backing up his reasons.

Crickets were part of Chinese culture as far back as the Tang Dynasty (AD 618-907). Keeping the insects, who were prized for their chirpiness, was a privilege of royals back then.

The passion began spreading to the hoi polloi during the Ming Dynasty (1368-1644), and gradually became widely popularized in the Qing Dynasty (1644-1911), during Emperor Kangxi’s reign.

The tradition of staging matches involving fighting male crickets has an equally long history as a popular pastime in China. The matches rarely cause serious injuries to the insects.

The cricket fighting season begins in summer and championships take place in autumn. The national championships are a two-day event in Beijing, following regional competitions across China.

Cricket culture was banned during the “cultural revolution” (1966-76), but once that ended, it emerged again, stronger than ever. New forms of accessories to raise the insects came on the market.

“The best cricket keepers can be found in Beijing, Xi’an and Nanjing,” Bai says. “Those were capitals where emperors resided.”

Bai recalls childhood trips to Shanghai with his father every summer just to buy a cricket or two. At the time the family lived in the city of Daqing, northestern China’s Heilongjiang Province.

“It left an impression on me,” Bai says. “Winters in the north were freezing. Everything turned to ice. But in my room, the chirping sounds of crickets were heartwarming. Can you imagine it?” 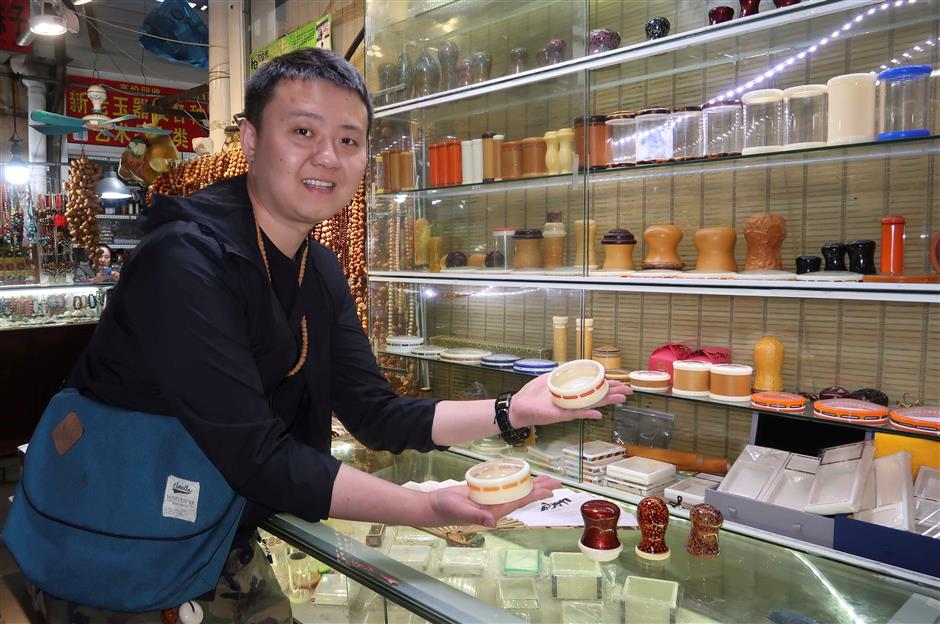 Bai Zixiao shows off his cricket equipment at his shop in the Wanshang Flower Market in Shanghai.

Historically, the hobby thrived in the winter season, when crickets aren’t breeding.

“It meant you could keep one alive all winter,” Bai says. “Men are child-like. The childishness of keeping crickets remains in me, I just kept upgrading the equipment as I grew up. It’s like playing with transformers or Lego.”

Bai admits that crickets are not your standard sort of pets.

“There is no interaction with them,” he says. “They simply create sounds for you and those around you to enjoy.”

Crickets even have pedigrees and some are carefully bred. Care can be finicky. Each cricket must be housed in its own container. The feeding includes ground shrimp, red beans and goat livers.

His shop is a popular destination for serious cricket lovers.

“I don’t deal with low-end products,” he explains.

Indeed, he has a variety of containers designed for different species. Each amplifies the stridulation of the insect wings differently. The hulu (gourd) produces the best sounds.

Bai accumulated his equipment stock gradually. One time, he lost a batch of gourd containers that set him back tens of thousands of yuan. But he persevered.

He tried operating his business from an online platform but later found it wasn’t satisfactory.

“Customers need to see, touch and feel before they are will to pay the price of a high-end product,” he says.

He set up a shop in the Wanshang Flower Market almost two months back. The chirping sounds of crickets from neighboring stalls surround him. He keeps a pet bird and a small Yunnan cricket at his stall. 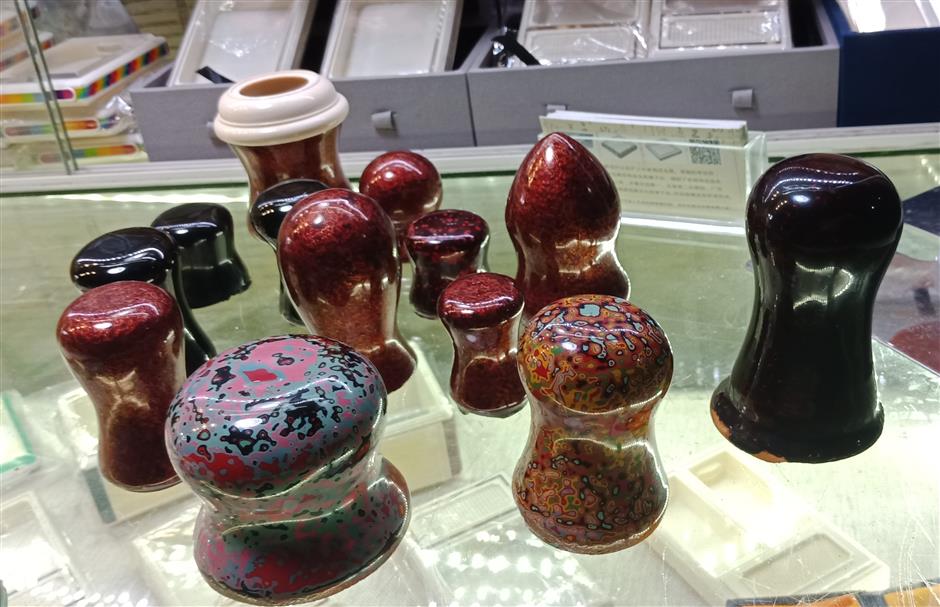 Bai's store features a variety of containers designed for different cricket species, including some shaped like gourds.

His products evolve with customers’ needs. Bai collaborates with craftsmen to modify designs every year. He pointed to tiny grills bordering a cylindrical case that had to be handcrafted.

“Older people focus on the crickets,” he says. “The young are more willing to splash out on fine cricket equipment.”

One of the most bestselling containers is a traditional gourd coated with varnish. It’s a departure from traditionally carved gourds that tended to succumb to mold.

Bai displayed two samples of the shiny version, with one a rose petal design and the other in gold flake. They cost about 3,000 yuan (US$472.44). Bai sells an average of 10 weekly.

Bai says he loves talking about crickets with customers. He mentioned an electrical technician who scrimped and save to buy a cricket product costing five times his salary. He also talked of foreign customers who have become intrigued by the pastime.

In one instance, Bai heard about one customer who was paralyzed in an accident. At the man’s request, he took samples of his products to the man’s home.

Next year, Bai plans to produce a short documentary video with a partner from a directing background to promote crickets as a hobby.

“Television programs publicize Chinese cuisine and other cultural heritage — even fighting cricket matches,” he says. “I want to pique interest in crickets because they are part of Chinese culture, and I think traditional culture should always continue.”