'Support troops' guard the doors to the city

While medics work on the front line of the war against the novel coronavirus, a rear guard of volunteers works to help maintain public health and safety.

A group of young people have been taking up their posts at Shanghai Railway Station, a busy traffic hub in the downtown area, for more than 40 days. They are called the “gatekeepers” of the city because they safeguard the entry to Shanghai.

The young volunteers are stationed at the three exits, where white inspection tents have been erected.

“Dear passengers, you are entering the temperature checking zone. Please line up and move forward in an orderly manner. Please scan the QR code and fill in the health statement form on the Healthcare Cloud app. Thank you for your cooperation.”

The voice from a handheld megaphone plays on a loop.

“My colleagues here tell me they hear the voice in their dreams,” said Gong Hao, 25, a volunteer wearing white laboratory protective clothing with a fluorescent Sonic label.

Gong is a member of Shanghai Sonic Youth Volunteers Service Center, a non-governmental organization that focuses on public safety.

“The fluorescent label is conspicuous at night, giving security to volunteers on the night shift,” said Gong, a graduate in broadcasting.

The volunteers, of all ages and walks of life, take temperatures, maintain order, instruct passengers in the use of the health app and assist medical staff in transferring passengers with abnormal body temperatures to hospital. They provide round-the-clock services.

“The epidemic has given people awareness of the power of social forces,” said Yan Hong, founder of Shanghai Sonic Youth Volunteers Service Center.

True to its words, an army of volunteers fight against the epidemic nationwide, including those delivering groceries to residents in self-quarantine, acting as voluntary drivers and deliverymen to assist hospitals, and helping raise funds for medical equipment. 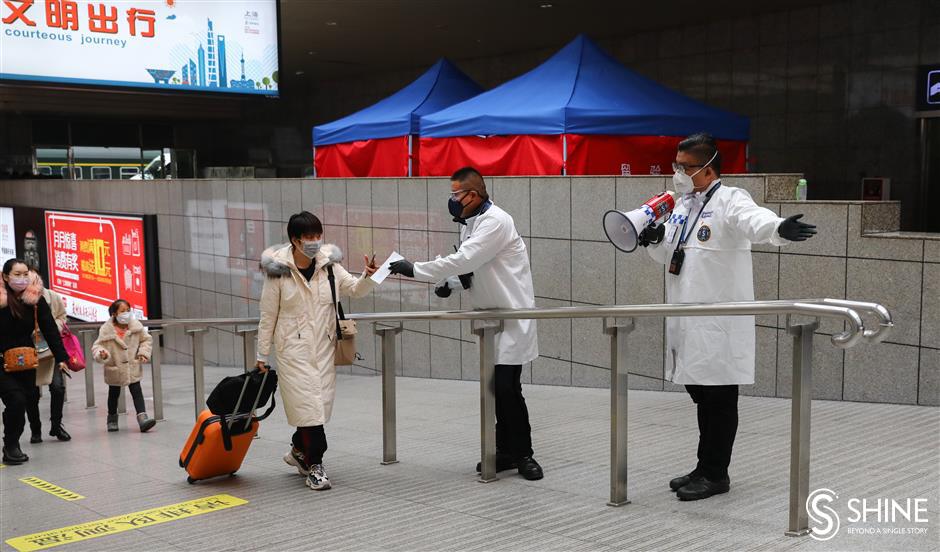 At Shanghai Railway Station, volunteers Yan Hong and Gong Hao (right) distribute leaflets instructing arriving passengers to fill in the health form on the Healthcare Cloud app and guide them toward a temperature checkpoint.

Yan’s volunteers draw on their experience in past emergencies to mobilize every resource available to them.

When it was almost impossible to buy a face mask in the early days of the outbreak, the team drew on its own stockpile, including respirators, goggles, protective clothing and gloves.

“We established a public health emergency response team as early as 2013, when the influenza A (H7N9) virus hit Shanghai,” said Yan. “Since then, we have been stockpiling emergency supplies.”

Members with prior training in emergency preparedness comprised the first group of volunteers dispatched to Shanghai Railway Station.

Among them was Gong, who went into action the day after he was called to duty.

He has been on a shift that begins at 7am for more than 40 days. During this period, he has been living alone in a rented house in order not to infect his parents.

“Although I am sure that I can pro­tect myself, there is always the risk of becoming infected,” said Gong, a native of Shanghai. “Self-quarantine is essential.”

In the first few days, Yan and Gong worked up to 80 hours at a stretch until volunteers from other organizations joined them in railway station monitoring. With increased personnel, 24/7 coverage is provided by four shifts a day, each lasting six hours.

All the volunteers are required to receive special training given by the Shanghai Sonic Youth Volunteers Service Center.

“We teach them how to wear and take off protective equipment, how to protect themselves from being infected, and how to cope with extreme cases, like passengers refusing temperature checks,” said Gong. “Stabilizing the reaction of those who show abnormal body temperatures is also very important.”

“We established this ‘camp’ according to the standards of army field headquarters,” said Yan. “We also provide walkie-talkies and portable speakers.”

If all this sounds a bit military in organization, the similarity isn’t accidental.

Before the founding of the professional volunteer team, Yan was a military enthusiast who established a group called M65, which was named after an American army field jacket used during World War II.

“Studying army uniforms, flags, tactics and emergency medical treatment, we are fans of the military culture,” said Yan. “However, we are just a small group of people. We wanted to share our knowledge with the public.”

“We also teach the public how to protect themselves in the event of a nuclear, biological or chemical attack,” Yan added.

Joining the volunteer group in 2017, Gong has become an instructor. He listed several basic safety tips, which are often overlooked. For example, a wet towel used to cover the nose and mouth during a fire evacuation needs to be folded three times. And if a pot is on fire in a kitchen, use the lid, not water, to extinguish the flames.

“We need more community emergency response teams,” said Yan. “While experts are the ‘assault troops,’ we ordinary people are support troops, self-mobilizing in a disaster. Take an earthquake for example. Community response is critical in the first 72 hours, before external aid forces arrive.”

﻿
Special Reports
﻿
61922
,
61924
,
Guide for overseas Chinese students during COVID-19 pandemic
A cemetery that celebrates life and death
Nile threatened by waste, warming, dam
Enchanting abode in idyllic tranquility
Connecting nature, culture and people with design
Fancy footwork: An embroiderer finds her niche
How overseas Shanghainese go through outbreak
Counseling eases psychological toll of outbreak
'Support troops' guard the doors to the city
A guardian of the light ... and of hope for Wuhan
EXPLORE SHINE