In Li Yijun’s home, more than 1,000 handmade embroidered shoes are piled in the living room and bedroom.

The shoes, of different sizes, all have the pattern of a tiger face on the front. For the past decade, the 68-year-old has devoted nearly all her time to making hutouxie, or “tiger-faced shoes.”

Her interest was piqued when she saw the shoes on a TV program about Chinese traditional folk crafts displayed at the 2010 World Expo held in Shanghai. “I could make those,” she thought to herself.

Never did she imagine that she had found a new, consuming passion in her life.

“I always loved knitting and embroidery,” she says. “I have knitted many hats to give people as presents. It’s true that I was fond of one thing or another at any given time, but nothing caused an addiction in me like hutouxie.”

The origin of the shoes is hard to trace, but they have been a traditional gift to newborn babies over the centuries in most of China.

One story goes that in ancient times, children wearing hutouxie were spared death during local epidemics. People believed that the shoes protected them.

Li has made the shoes as presents for babies and sometimes newly-weds.

“When you give them to babies as presents, you need to give them three pairs: one pair blue, one red and one purple,” she says. “The blue pair protects the baby from diseases and disasters because the word ‘blue’ (lan) has the same pronunciation as ‘prevent.’”

She goes on to explain: “The red pair blesses the baby to have a prosperous life, and the purple symbolizes that the baby will be rooted in the family until grown and will not be lost or kidnapped.” 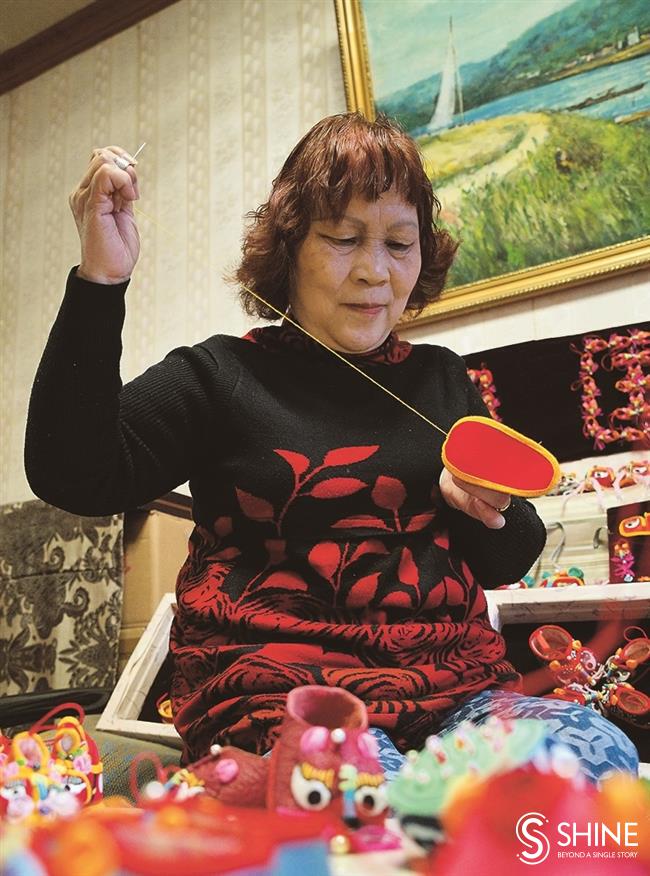 Starting with drawing a design, Li uses different types of cloth, and sometimes even leather, and colorful threads to make the shoes. She has assorted drills and needles, and her trusty old sewing machine.

It takes her usually a day or two to finish a pair, depending on the size of the shoes. The smaller, the more difficult.

“My favorite material is velour, but leather does give the shoes a more modern look,” she explains. “But, in fact, many of the shoes are made of satin quilt facing.”

Before duvet covers became popular in China, almost every family included satin quilt facing in dowries for daughters. Much of that fabric ended up in cupboards, unused for years.

“Not long after I started to make hutouxie, many friends of mine gave me their satin and I gave them shoes in return,” she says. “But then satin began piling up in my home and I had to refuse further offers.” 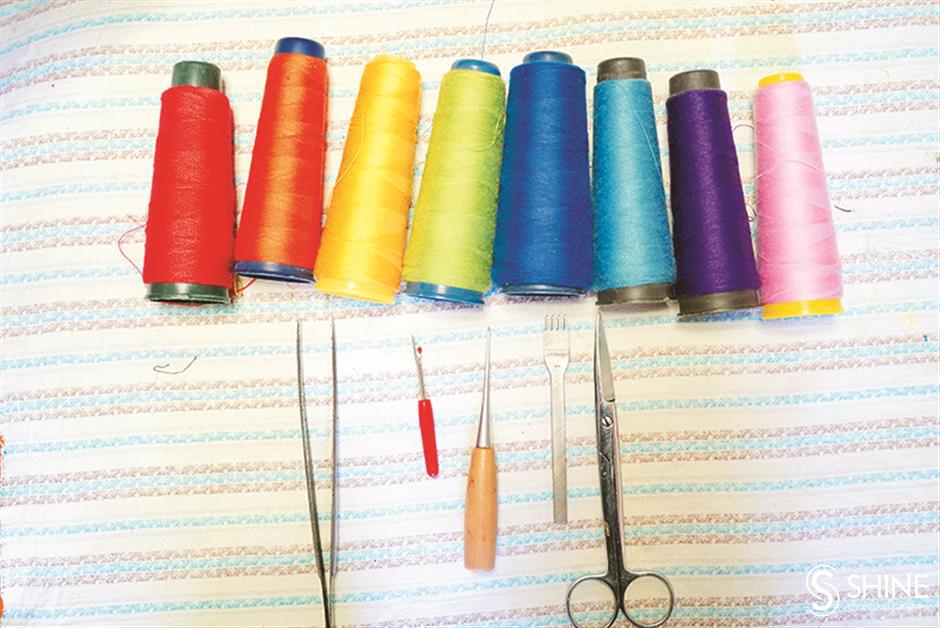 The most difficult part of making the shoes, she says, is sewing the eyes of the tiger. They are important because they give the shoes a distinctive expression.

“If the eyes are not evenly sewed, the tiger face looks silly,” she says. “And no one wants a cross-eyed tiger.”

Li says she learned to make the shoes all by herself. It seems that she is gifted, not like her mother, whom she describes as a complete “train wreck” when it came to needlework.

“I spent nine years in northeast China’s Heilongjiang Province in the 1970s, where I learned to sew and do needlework,” she says. “During those hard times, I had no one to take care of me, so such skills were essential.”

Li appears to be a happy, energetic person, but she has known dark times. In 2003, she was diagnosed with cancer. The disease was caught early, and she was assured by doctors that she would live at least another five years.

Ever upbeat, she said to herself: “Fine, at least I have another five years.”

She received a blood transfusion of 1.2 liters ahead of surgery at the Shanghai No. 1 People’s Hospital. After subsequent chemotherapy, she turned home bald.

“Though I was weak, I felt reborn,” she says. “Now I have set May 13, the second day of my initial diagnosis, as my reborn birthday.”

She has never forgotten the selfless doctors and generous blood donors who saved her life. For that reason, she never sells the hutouxie she makes. Shoes not given as presents are donated to exhibitions or charities.

Li has won many awards in various craftsmanship and traditional culture competitions organized in Shanghai. Now she plans to give 68 pairs of hutou­xie to the No.1 People’s Hospital medical team members who went to Wuhan to fight the novel coronavirus at the front line of the outbreak.

“Doctors at that hospital once saved my life, and they’re now saving the lives of others,” she says.

“I really want to do something for them. My hutouxie could be their talis­mans, so that they can stay safe and healthy during their work.” 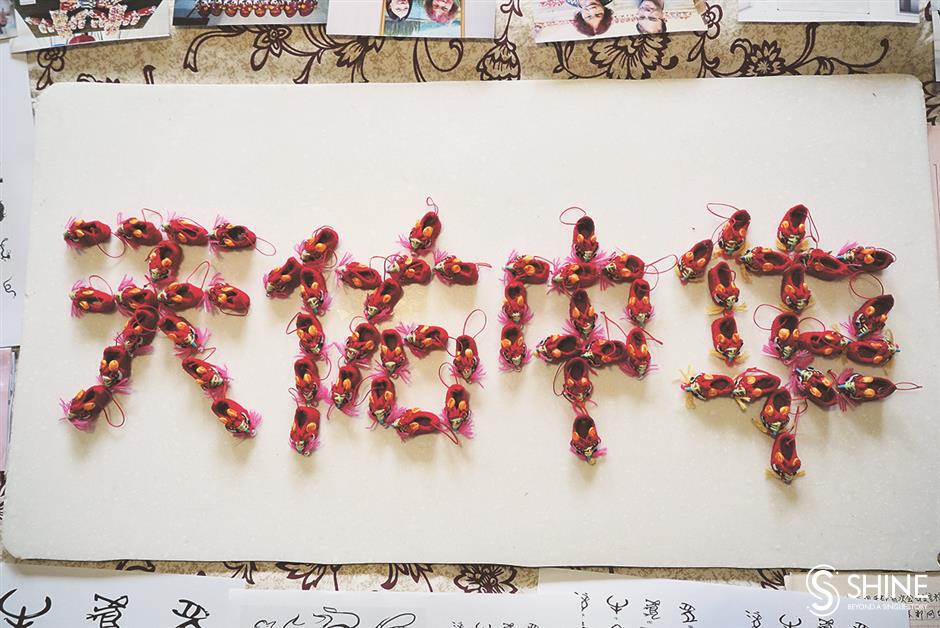 Li arranges hutouxie to form the Chinese characters for “God bless China” to express her wish for a speedy conclusion to the coronavirus outbreak.

﻿
Special Reports
﻿
61768
,
Guide for overseas Chinese students during COVID-19 pandemic
A cemetery that celebrates life and death
Nile threatened by waste, warming, dam
Enchanting abode in idyllic tranquility
Connecting nature, culture and people with design
Fancy footwork: An embroiderer finds her niche
How overseas Shanghainese go through outbreak
Counseling eases psychological toll of outbreak
'Support troops' guard the doors to the city
A guardian of the light ... and of hope for Wuhan
EXPLORE SHINE