A guardian of the light ... and of hope for Wuhan 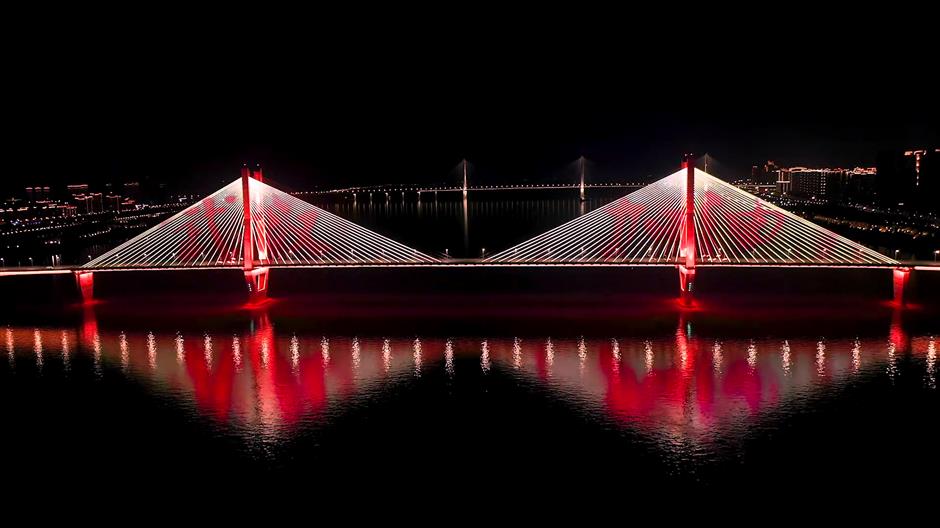 Wen Rui, a lighting engineer, has been living alone near a bridge in Wuhan for a month making sure its lights shine out with messages of hope.

Wen Rui, 27, is a bridge lighting maintenance engineer employed by Songjiang-based China Railway No.15 Bureau Group Electrification Engineering Co. Over the past month, Wen has been living alone at a plate house near the Second Wuhan Yangtze River Bridge. He guards the bridge’s lighting system and ensures that phrases such as “Stay Strong, Wuhan” and “Stay Strong, China” remain glowing on the bridge. The following is Wen’s account of his time in Wuhan. 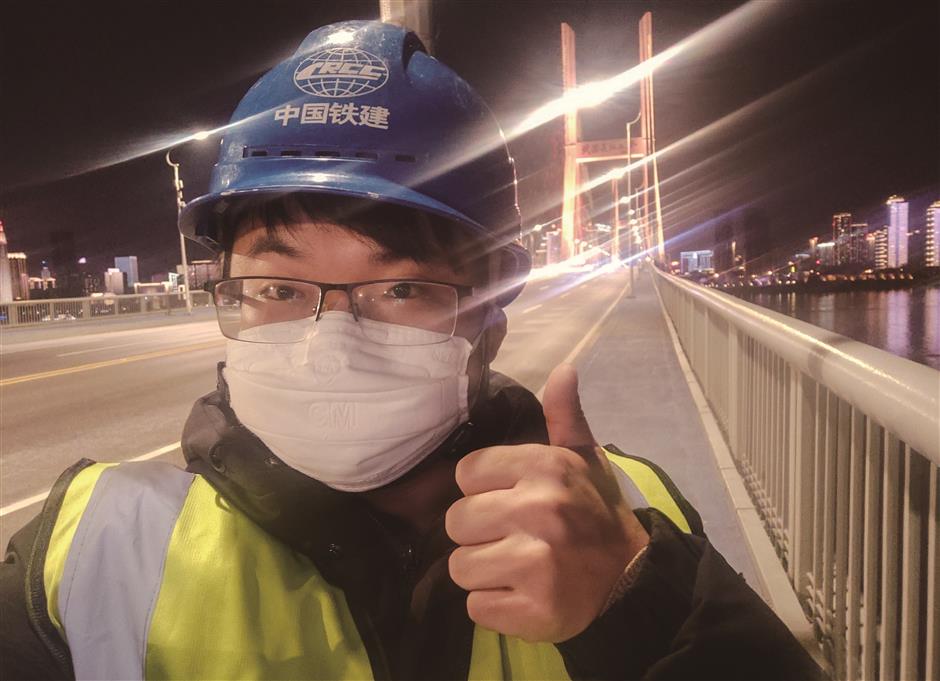 Wen Rui, 27, has been maintaining the lighting system on the Second Wuhan Yangtze River Bridge for the past month.

Especially now, I want the four Chinese characters “Stay Strong, Wuhan” to remain glittering above the river, nonstop every night.

I have been on duty here alone for 30 days. After the outbreak of the epidemic, the beach park that used to be full of cheers and laughter fell into silence all of a sudden.

As a matter of fact, I have heard no other human voices besides my own thinking aloud for days. I had expected my Lunar New Year would be lonely, but didn’t expect it would be so lonely. When I was especially introspective on duty, I could even hear my own breathing and heartbeat, accompanied by the gurgling sound of the forever running Yangtze River water.

I work for Songjiang-based China Railway No.15 Bureau Group Electrification Engineering Co and hail from north China’s Shanxi Province. Ahead of Spring Festival my boss asked me whether I would like to work overtime in Wuhan. I realized my colleagues all had families and I was the only single person, so I agreed.

In a few days the quick spread of the novel coronavirus overwhelmed everyone and then came the news of the lockdown of Wuhan City.

My mother became worried about me when she heard I am staying in Wuhan. I then reassured her that I was safe because nobody was around me.

The city was left with vacant streets during the day, but when the night fell, the lights on the Second Wuhan Yangtze River Bridge shine brightly. I know there are pairs of eyes in every quarantined street, neighborhood and household that are gazing at the illuminated bridges across the Yangtze River.

Lights turning on as scheduled is telling everyone concerned with Wuhan that the city is in operation though it may be locked down.

Every night when the lights are switched on, I walk out of my plate house to a distant clearing where I can behold the whole bridge, then take photos, keep records and report to my supervisors. If any part of the lighting goes wrong, I will report the matter and do maintenance as directed.

At 6pm on January 27 I wrapped myself in an overcoat, put on a face mask and went out to take photos of the bridge. Not until I walked to my usual observation spot did I realize that the night’s lighting pattern had changed.

The original lighting effect had been a landscape painting. But at that moment four Chinese characters “Stay Strong, Wuhan” were shining on the 2-kilometer-long, 100-meter-tall cable-stayed bridge’s ropes. The flaming red light flushed the surface of Yangtze River and the night sky of the river town.

I had a feeling then that I was not only safeguarding the lighting system of a bridge, but also a hope.

Since then I would pay more attention to lighting maintenance while patrolling the bridge, to repeatedly confirm that the whole system was running smoothly. I hoped the encouraging words conveyed through the lighting system would reach every Wuhan citizen gazing at the bridge.

On that day, after lights on the bridge were turned on, some of the cables failed. The sky was raining, so I judged it was rain that had caused a short circuit and a circuit breaker to trip. It was easy to maintain some of the control units, but one of them was installed on the outboard of the bridge guardrail and it required the maintainer to cross the rail to get it to work.

On a normal day we would record the matter and wait till the next day to carry out the work. But at a time like this, I thought for a second and crossed the rail to fix the problem on a path less than one meter wide. Behind me was the surging Yangtze River.

The rain had caused a short-circuit and the broken unit was now sizzling and sparking.

It was 11pm before everything turned to normal. The winter night in Wuhan was freezing, but I was sweating all over due to the continuous work. I took out my cellphone and told my WeChat work group: “Things are back to normal.”

When I was typing, my heart was filled with mixed feelings. How I hoped the city of Wuhan could be back to normal soon!

Drones would occasionally fly over the bridge and I knew it was media organizations doing live broadcasts. I would watch those live broadcasts and send the web links to my family and friends. Of course, I felt proud — I was guarding the light and telling people nationwide in China that the people in Wuhan are brave and confident.

I was feeding myself with too much instant food and on Lantern Festival I cooked myself a bowl of lor mee, noodles with thick gravy. Biting the first mouthful of steaming hot noodles, I understood for the first time how Shanxi people outside their hometown loved a bowl of noodles.

I received a phone call from my family daily and my bosses and colleagues in Songjiang always managed to mail me some health-care products and food.

I feel glad that I am guarding the light and doing something for this battle against the virus.

The confirmed cases of novel coronavirus pneumonia in the city are decreasing daily. I believe while we are staying strong for a while, we will win and see the cherry blossom the city has been so famous for.

Soon the beach park will be back to normal, fragrant among flower blossoms and with chirping birds. So will the Second Wuhan Yangtze River Bridge I am guarding with its bustling traffic. 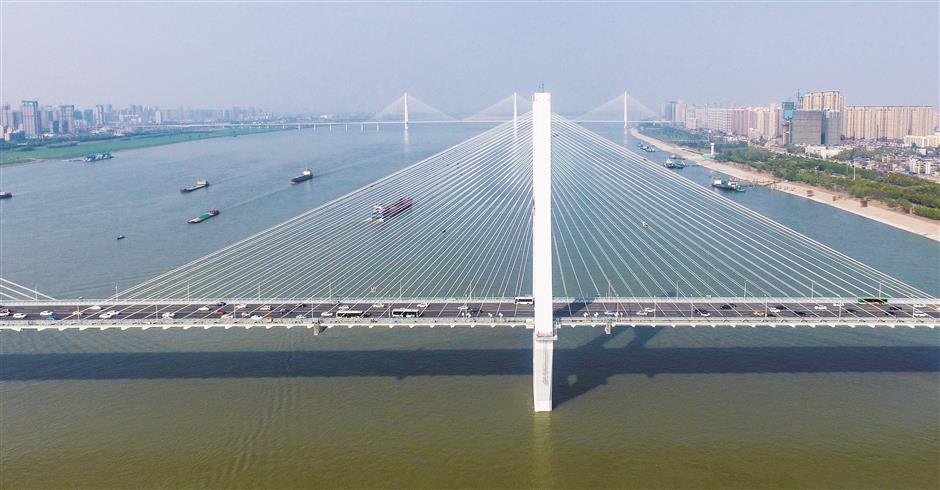 The quiet bridge that Wen guards now should see bustling traffic soon as the number of pneumonia cases in Wuhan is declining daily.